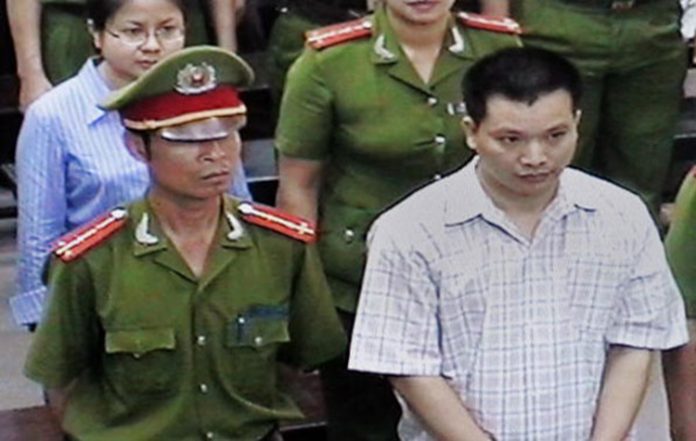 We appeal to the Vietnamese government to honor its international and domestic obligations and to release Mr. Nguyen and Ms. Le immediately and unconditionally.

On 16 December 2015, prominent human rights lawyer, Mr. Nguyen Van Dai, 46, and his colleague, Ms. Le Thu Ha, 33, were arrested at their home and office in Hanoi, Vietnam, respectively. Both have been charged with “conducting propaganda against the Socialist Republic of Vietnam” under Article 88 of the Vietnamese Penal Code, a law that has been routinely and arbitrarily invoked by the government to suppress critical voices.

Mr. Nguyen and Ms. Le are being held in B14 prison in Hanoi. Requests by activists to visit them have been rejected and there are concerns that they are at risk of torture and other ill-treatment. If convicted, Mr. Nguyen and Ms. Le could face up to 20 years in prison.

We appeal to the Vietnamese government to honor its international and domestic obligations and to release Mr. Nguyen and Ms. Le immediately and unconditionally.

We also call on the international community to act and put pressure on the Vietnamese government regarding these cases which have a severe chilling effect on freedom of expression in Vietnam.

During Mr. Nguyen’s arrest, his home was searched thoroughly by approximately 20 police officers. His laptops, bank documents and many other personal items were confiscated, while his apartment remains under tight surveillance.

Mr. Nguyen is a well-known peaceful campaigner for a multi-party democracy and the protection of human rights in Vietnam. He has devoted his life to providing legal assistance to the most vulnerable and marginalized people in society.

Mr. Nguyen has repeatedly been subjected to unwarranted persecution for undertaking his legitimate work. In 2007, he was convicted under Article 88 of the Penal Code (employing propaganda against the state) and sentenced to 4 years in prison and placed under 4 years of house arrest. At the time, he had been holding seminars to teach students about the fundamentals of a free society and the rule of law.

Since Mr. Nguyen’s release from prison in 2011, he had been subjected to countless incidents of harassment and surveillance by police officers. He was still recovering from injuries sustained from a vicious assault by masked assailants on 6 December 2015, after he had attended a meeting to mark International Human Rights Day. He was badly beaten, robbed and thrown on the street.

Vietnam has ratified the International Covenant on Civil and Political Rights, (ICCPR), which protects the right to freedom of opinion and expression (Article 19), and the right to liberty and security of a person, which includes the right to not be subjected to arbitrary arrest and detention (Article 9).

The UN Basic Principles on the Role of Lawyers specifically affirm that lawyers are “entitled to freedom of expression, belief, association and assembly” and that, “they shall have the right to take part in public discussion of matters concerning the law, the administration of justice and the promotion and protection of human rights”. The Basic Principles also set out a number of guarantees to ensure that lawyers are able to fulfill their professional roles without undue interference.

Furthermore, Vietnam’s Constitution protects the right to freedom of opinion and speech (Article 25) and guarantees that no citizen may be arrested without a warrant and that the arrest and detention must be in accordance with the law (Article 20).

We therefore strongly urge the Vietnamese authorities to comply with Vietnam’s human rights obligations, and drop all charges against Mr. Nguyen and Ms. Le, who have been peacefully carrying out activities to promote and protect human rights.

We further urge the international community to strongly intervene at the highest possible levels to support the expeditious release of both human rights defenders.