At the present, there are at least two types of venues for CSO engagement with ASEAN. There are forums established by ASEAN bodies where CSOs can attend and participate in those events and there are y forums/ activities held by CSOs, where ASEAN institutions are officially or informally invited to attend.

The ASEAN Summit is an annual meeting of the ASEAN Heads of State or Governments. The Summit is the supreme policy-making body of ASEAN. Before the adoption of ASEAN Charter in 2007, ASEAN Summit was held only once in a year. However since 2008, this Summit is held twice a year. The summit meeting in the first half of the year involves ASEAN Member States only while the second summit for the year also involves ASEAN dialogue partners (non-ASEAN countries).

The ASEAN Member State that holds the chairmanship usually hosts the ASEAN Summit. This rule is also applicable to most of other ASEAN’s meetings.

CSO-organized events at the same time and location as the ASEAN Summit can be used to bring attention to human rights or other issues.

ASEAN Ministerial Meetings are ministerial level meetings among ministers of ASEAN Members States. There are various ministerial meetings in ASEAN but the highest policy-making body is the ASEAN Foreign Ministers Meeting.

The ASEAN Foreign Ministers also comprise the ASEAN Coordinating Council (ACC), which is tasked with organizing the ASEAN Summits, implementing any agreements made at Summits and Coordinating the ASEAN Community Council’s reporting to the Summit. The ACC meets at least twice a year.

The other ministerial meetings of ASEAN are referred to as ASEAN Sectoral Ministerial Bodies.

Most AICHR meetings are restricted only to AICHR and ASEAN officials. AICHR has held some consultations with non-government organizations but only with those organizations agreed to by the AICHR representatives. Engagement with CSOs continues to be ad hoc. 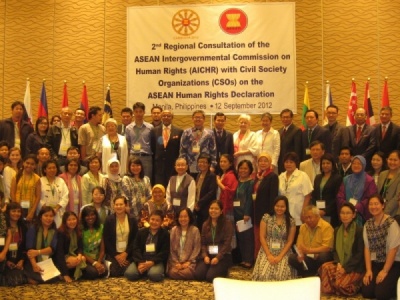 The dates of AICHR meetings can be found on AICHR’s website: www.aichr.org.

Submitting a Complaint to AICHR

Although AICHR does not have a formal mechanism to receive complaints of human rights abuse, it does accept communications via the ASEAN Secretariat. The Secretariat will send your letter to the AICHR Chairperson who will then decide whether to present it to the other AICHR Commissioners.

To make sure that your communication reaches AICHR you should send your complaint or letter:

There is no official complaint form. You can find an example of a complaint form, based on the Inter-American Human Rights Commission Complaint Form HERE and an example of a letter sent to AICHR by FORUM-ASIA HERE. Make sure to request a reply from the ASEAN Secretariat confirming receipt of your letter. Also, please let us know if you submit a complaint so we can monitor AICHR’s responsiveness.

Similar to AICHR, ACWC has two regular meetings every year. Additional meetings are held if required. The country chairing ACWC does not follow the rotation of the country holding the ASEAN Chair.

The dates of ACWC meetings can be found in the official ASEAN calendar and in ACWC press releases.

The ASEAN Forum on Migrant Labour (AFML) is a multi-stakeholder meeting, involving governments, employer associations, labor unions, international organizations, and civil society. The ASEAN Committee on the Implementation of the ASEAN Declaration on the Protection and Promotion of the Rights of Migrant Workers (ACMW) is the organizing body of this meeting.

The forum aims to develop a common understanding on the roles of various stakeholders, sharing experiences on promotion and protection of migrant workers, and develop recommendations to ASEAN Member State governments and the ACMW on migrant workers’ issues.

The ASEAN People’s Assembly (APA) is a regional civil society forum, which was initiated by the ASEAN Institutes of Strategic and International Studies (ISIS) network, a network of think tanks in several ASEAN countries.

The origin of ASEAN Peoples’ Assembly was the holding of an ASEAN Congress at the initiative of the Foreign Minister of Thailand, Kasem Kasemsri, at the ASEAN Ministerial Meeting in Brunei Darussalam 1995. Participants of this forum included ASEAN leaders, ministers, government officials, civil society organizations and think tanks.

This forum has been suspended indefinitely. The 6th APA meeting in Manila in 2007 was the last APA meeting to be held. Some sources state that this suspension occurred because ASEAN has decided to meet officially with the representatives of the newly organized ASEAN People’s Forum (APF).

Similar to the ACSC/APF, besides providing input to the functioning of the ASEAN Human Rights Institutions, the Regional Consultation also aims to establish more space for engagement with ASEAN on human rights issues. Human Rights Mechanism. Achieving this second objective has been made slow progress as AICHR is still hesitant to engage with CSOs from its own region.

List of Regional Consultation on ASEAN and Human Rights:

ACSC/APF is an annual/ regular forum of CSOs in ASEAN Member States, which is held as a parallel meeting to the ASEAN Summit of Heads of State. The meeting is hosted by civil society in the country that holds the ASEAN Chairmanship. Participants of this forum come from civil society organizations, NGOs, people’s organizations, and people’s movements. In this meeting, CSOs bring up broad issues from different sectors and concerns, such as human rights, development, trade, environment, youth, and culture, affecting many countries in the region. The ACSC/APF also features a forum through which participants can better understand the host country from the perspective of civil society.

The output from this meeting is a joint statement and recommendation for the ASEAN Leaders regarding the ASEAN Summit. A feature of the ACSC/APF is to open spaces for dialogue with ASEAN Leaders. Whether CSO representatives are able to meet with ASEAN Heads of State in the form of an Interface during the ACSC/APF depends upon the attitude of the government hosting the Summit and ACSC/APF.

Initially, this forum was named as ACSC (the 1st ACSC in Malaysia – 2005), and adopted in the Philippines (2006) and Singapore (2007). The additional name APF was added during the IV ACSC (2009) in order to accommodate the different interpretation towards the term CSO and people’s organizations from Thailand’s CSOs. Since then, different titles have been used for the ACSC/APF forum in the subsequent meetings.

Conveners of the ACSC/APF have varied from time to time. The Malaysian government together with the Center for ASEAN Studies of the Universiti Teknologi MARA (UiTM) organized the 1st ACSC. The 2nd, 3rd and 4th ACSC meetings were jointly convened by the Solidarity for Asian People’s Advocacy– Working Group on ASEAN (SAPA WG ASEAN), together with country networks in the Philippines, Singapore, and Thailand. In the 6th APF meeting in Viet Nam, the APF was convened by a government appointed organization, VUFO. In Indonesia the meeting was named ACSC/APF 2011 and organized jointly by country and regional organizations—a format to be followed subsequently throughout Cambodia, Brunei and Myanmar. In 2012 during the hosting by Cambodia, many CSOs forums took place. The ACSC/APF 2012 took place twice in Phnom Penh, the first one in March and the second one in November. The ACSC/APF 2013 was held in Brunei Darussalam in April 2013. While program templates, organizing processes and committees, and best practices have been adopted from year to year, the fact that ACSC/APF is a loose platform of CSOs, with no permanent governing body which can claim the ACSC/APF reflects the constantly changing and dynamic manner by which this forum is organized and convened.

This annual forum was established as a result of the ASEAN Ministerial Meeting on Social Welfare and Development (AMMSWD) in Brunei Darussalam (November 2010). This meeting adopted the 2nd Strategic Framework for Social Welfare and Development (2011-2015) that recognizes the ADF as key in promoting government and non-government collaboration on disability policy.  The Forum includes disabled people’s organizations (DPO) and their family organizations, the ASEAN Secretariat, ASEAN member states, international development agencies, civil society organizations (CSO), media, business sector, and academic groups.

One of the conveners of this forum is the Disabled Peoples’ International Asia-Pacific (DPIAP).