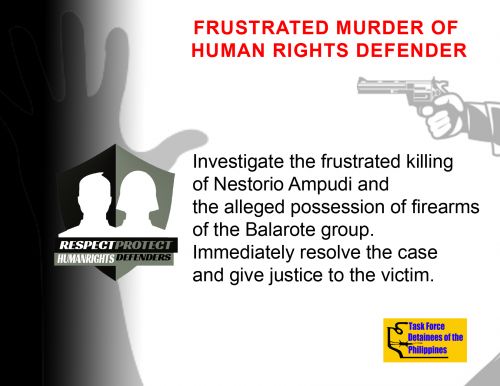 Urge the authorities to promptly investigate this case and ensure that all those responsible for the shooting of Ampudi are prosecuted and punished accordingly. Ampudi and his family should be given adequate protection, and the NCIP should immediately implement its policies on ancestral domain to facilitate the resolution of the case

ISSUES: Assertion to right to land of indigenous people

The Task Force Detainees of the Philippines (TFDP) is forwarding to you an appeal regarding the frustrated killing of an agrarian reform beneficiary.

If you wish to make any inquiries please contact the Research, Documentation and Information Program of TFDP, kindly send email to tfdp.1974@gmail.com .
—-

According to Ampudi’s wife Ligoria, she and her two-month old daughter Nicelyn were riding with Nestorio on his single motorcycle with plate no. 83093. They were on their way home to   P-9 Prakatahan, Barangay Pualas, Don Carlos, Bukidnon from Poblacion, Don Carlos, Bukidnon when Lirasan and an unidentified driver aboard a single motorcycle shot Nestorio multiple times while trying to overtake them. Nestorio fell on the ground with his motorcycle. The perpetrator immediately fled to an unknown direction. Ampudi sustained multiple gunshot wounds on different parts of his body and was immediately brought to St. Nino Hospital, Don Carlos, Bukidnon for medical treatment. He was recently transferred to Bukidnon Provincial Hospital in Maramag, Bukidnon. The victim is now in stable condition but is still waiting for his operation. His wife added that the two perpetrators were wearing masks, but she was able to identify Lirasan because of his built.

The Balarote group headed by Levelita Balarote-Zambrano was awarded 550 hectares of land by the Commission on the Settlement of Land Problems (COSLAP) last February 16, 1988. The group obtained a Writ of Relocation from RTC in Malaybalay and was installed in the area by the two court sheriffs and barangay officials last May 21, 2014. Some parts of the awarded land are presently occupied by the AMTA members.

On the other hand, AMTA belongs to Datu Casiano Montabod’s group who was awarded by COSLAP for 130 hectares of land in Purok 9 Prakatahan, Barangay Pualas. AMTA, which is now under the unified claim named as Manobo Kerenteken – Ilantungen Manobo Tribe, Inc. (KMTI) processed their Certificate of Ancestral Domain Title (CADT) at the National Commission on the Indigenous People (NCIP).

On March 10-25, 2015, the NCIP surveyed the ancestral land claim of the indigenous people including the AMTA area in Purok 9 Prakatahan, Barangay Pualas. Their CADT is now under deliberation at the NCIP in Manila.

On October 2, 2014, Nestorio Ampudi was fortunate to have survived an attempt to his life by the Balarote group at Purok 9 Prakatahan, Barangay Pualas, Don Carlos, Bukidnon.

Please send your letters to:

Please write a letter to the following authorities, calling on them to conduct a thorough investigation of the frustrated killing of Nestorio Ampudi in P-8, Barangay Calao Calao, Don Carlos, Bukidnon; investigate the alleged possession of firearms of the Balarote group; and urge concerned agencies to immediately resolve the case and give justice to the victim.

I am writing to draw your attention regarding the case of a human rights defender, member and overseer of Ambugkol Manobo Tribal Association (AMTA) and has a pending Ancestral Domain Claim in Don Carlos, Bukidnon who was shot while onboard his motorcycle together with his two-month old daughter and wife.

I have learned that on January 9, 2016, Ampudi suffered a third attempt to his life while he and his wife and their two-month old daughter were on their way home to P-9 Prakatahan, Barangay Pualas, Don Carlos, Bukidnon from Poblacion, Don Carlos, Bukidnon. Jun jun Lirasan, their neighbor who is working with the Balarote group, and an unidentified driver aboard a single motorcycle shot Ampudi multiple times while trying to overtake them. He fell to the ground with his motorcycle. His wife and child were lucky not to be hit, but his wife sustained minor injuries during the incident.

The threats towards Ampudi stemmed from his struggle to obtain a Certificate of Ancestral Domain Title (CADT), in contravention of the Levelita Balarote-Zambrano group’s claim that they own the land under dispute, awarded to them by the government through the Commission on the Settlement of Land Problems (COSLAP).

It was brought to my attention that Ampudi used to till a parcel of land which he owns. However, the Balarote-Zambrano group prevented him to till his land. He was left with no choice but to work outside his land. While their claim for ancestral land has yet to be settled, Ampudi served as a paid farm worker of a certain Danny Tahuyan to raise some income for his family. The Balarote-Zambrano Group also created policies that restricted the indigenous people from tilling their land and that imposed a curfew of 9:00 p.m.

The Indigenous Peoples Right Act (IPRA) should therefore be effectively implemented to resolve this dispute. I also learned that even the National Commission on Indigenous Peoples (NCIP) has not taken any action to protect the interest of the members of the Manobo tribes and their communities against the unlawful claim of Balarote-Zambrano on their ancestral land and source of subsistence.

I urge the authorities to promptly investigate this case and ensure that all those responsible for the shooting of Ampudi are prosecuted and punished accordingly. Ampudi and his family should be given adequate protection, and the NCIP should immediately implement its policies on ancestral domain to facilitate the resolution of the case.

I look forward to you urgent action.