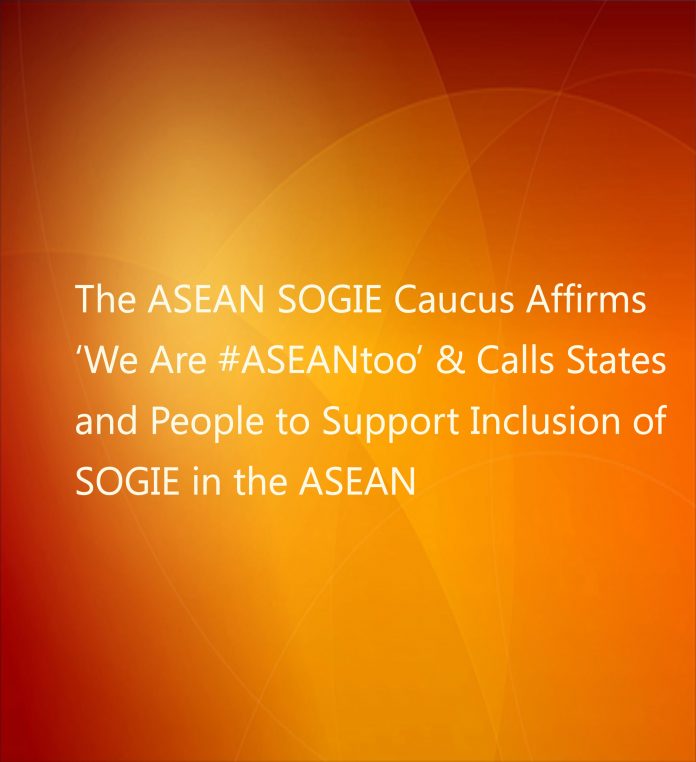 March 13, 2014 – The ASEAN SOGIE Caucus (ASC) yesterday launched its ‘We are #ASEANtoo’ campaign on its social media sites in the lead up to the ASEAN People’s Forum that will take place in Burma from 21 to 23 March 2014. The social media campaign calls online users to show their support for the inclusion of sexual orientation, gender identity and gender expression (SOGIE) in the ASEAN by using the hashtag #ASEANtoo as they send supportive tweets and Instagrams.
In addition, the ASC released a summary of laws that discriminate against lesbians, gays, bisexuals, trans*, intersex and queer (LGBTIQ) persons in the ASEAN. This is accompanied by online posters of the ASC’s recommendations to the ASEAN to promote and protect the rights of LGBTIQ persons. The posters can be found in eight major languages used in the ASEAN – Chinese, Filipino, Indonesian, Khmer, Malay, Tamil, Thai, and Vietnamese. The full recommendations can be found on the website.
“The aim of the campaign is to raise awareness regarding the ASC’s recommendations, which address some of the pressing issues concerning LGBTIQ persons in the ASEAN. The ASC calls the government of all ASEAN countries to repeal laws that discriminate against LGBTIQ persons and to comply with human rights standards, establish national level ASEAN mechanisms and review existing human rights instruments, and depathologize SOGIE,” said Hla Myat Tun, of Colors of Rainbow, Myanmar.
Chumaporn Taengkliang, Togetherness for Equality Action Group (TEA group), Thailand further added, “Each country in the ASEAN has laws that discriminate based on sexual orientation and/or gender identity, contrary to their constitutions that guarantee fundamental rights and liberties for all. Meanwhile, state sanctioned violence continues unchecked. In such environments, we face barriers from fully enjoying our fundamental rights, accessing services, and living a fulfilling and meaningful life without fear, shame and guilt.”
“Many LGBTIQ persons are denied our right to health when SOGIE is still pathologized. To date, trangenderism or gender dysphoria is still listed as a form of mental illness in the Diagnostic and Statistical Manual of Mental Disorders (DSM). Homosexuality, on the other hand, was removed from the DSM in 1986, but many continue to believe that it is a mental illness. The assumption that SOGIE is a mental illness leads to attempts to cure us. This violates our fundamental liberties and takes away our personal autonomy. In addition, corrective programmes have been proven ineffective, and actually negatively scar LGBTIQ persons,” explained Yulianus Rettoblaut the Chairperson of Indonesia Transwomen Communication Forum.
With this campaign, ASC aims to create a positive environment where diversity and choice are respected, where people can all co-exist in dignity and humanity.  In view of that, we call LGBTIQ persons and allies to post ‘selfies’ or photos of themselves with apps like Instagram, using the hashtag #ASEANtoo to show your support for the inclusion of SOGIE in the ASEAN.
The ASC will also host a series of ‘Queer tweets’ on the 13, 14 and 15th March 2014 with three different topics every day. We shall cover the basics on the first day, the trends and challenges on day two, finally, positive developments in relation to SOGIE in the ASEAN on day three.