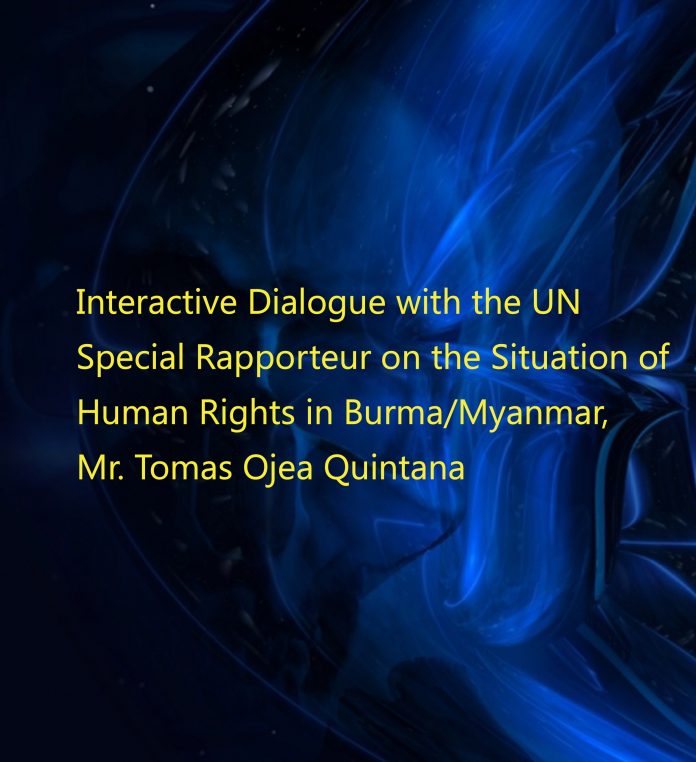 Oral Statement Delivered by Joses Kuan on Behalf of
Asian Forum for Human Rights and Development (FORUM-ASIA)
Monday, 17 March 2014
Mr. President, FORUM-ASIA welcomes the Special Rapporteur’s report (A/HRC/25/64), which underlines a need for the Council’s sustained attention as serious violations persist and remain unaddressed, undermining positive developments. We share the Special Rapporteur’s concern over continued arrests and imprisonment of individuals for peaceful political activities. Despite the government’s pledge to release all political prisoners[1], the Assistance Association for Political Prisoners (AAPP) has documented at least 30 prisoners who remained behind bars at the end of 2013, with 15 more imprisoned so far this year. A further 164 individuals currently await trial on various charges relating to political activities.[2] Repressive laws[3] continue to operate despite repeated calls by the Special Rapporteur for reforms. Trumped up criminal charges are also now increasingly used to criminalise political activities.
Mr. President, persistent gross and systematic violations, including sexual violence, torture and extrajudicial killings, continue in ethnic nationality areas. Increased militarisation near conflict zones, land confiscation, forced evictions, irresponsible exploitation of natural resources and unethical investments are added concerns. The escalation of communal violence also remains unaddressed, particularly in Rakhine State against the Rohingya. We reiterate our call to review the 1982 Citizenship Law and to end all discriminatory policies and practices against the Rohingya and urge full, transparent and independent investigations into all allegations of human rights and humanitarian law violations.
Mr. President, we concur with the Special Rapporteur and the recent open letter to the Council by 46 civil society groups[4] on the important need to retain the Special Rapporteur mandate as it is and on the urgent need for an OHCHR office with a full promotion and protection mandate.
Finally, FORUM-ASIA expresses its sincere appreciation of Mr. Quintana during whose tenure significant improvements took place in the country. The four core human rights elements Mr Quintana specified at the start of his mandate remain key benchmarks to asses the progress made and have yet to be fully met. The Council must urge Burma/Myanmar to fully implement these recommendations.
[1]   Presidential Pardon Order Number 51/2013
[2]   Asssistance Association for Political Prisoners (AAPP), 14 March 2014.
[3]   FORUM-ASIA, Press Release, Burma: Human Rights Groups Condemn Ongoing Crackdown on Protests and Peaceful Assemblies, 2 May 2013, http://www.forum-asia.org/?p=16201
[4]   Open Letter from 46 civil society to Member of States the UN Human Rights Council regarding the situation of human rights in Burma, 10 March 2014, http://www.forum-asia.org/?p=16632