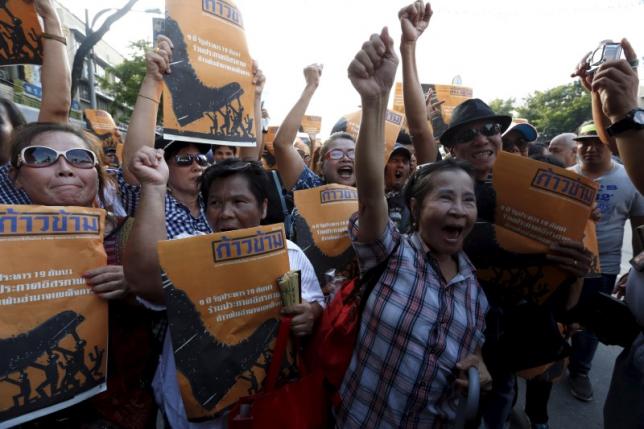 The arrest and detention of 4 democracy activists in Bangkok is a crude attempt at muffling dissent, striking fear and infringing basic freedoms including the freedom of expression and freedom of peaceful assembly and of association, the Asian Forum for Human Rights and Development (FORUM-ASIA) said today.

(Geneva, 22 January 2016) – The arrest and detention of 4 democracy activists in Bangkok is a crude attempt at muffling dissent, striking fear and infringing basic freedoms including the freedom of expression and freedom of peaceful assembly and of association, the Asian Forum for Human Rights and Development (FORUM-ASIA) said today.

“The charges against the student activists for exercising their political freedoms are excessive and infringes on their basic rights guaranteed under national and international law,” said Evelyn Balais-Serrano, Executive Director of FORUM-ASIA.

“We call for all charges against them to be dropped immediately and request authorities to end this witch-hunt against peaceful protesters. A healthy democracy needs to respect the rights of its citizens to dissent including through peaceful protests.”

On 20 January around 10.30 pm, Sirawith Seritiwat, a member of the NDM and a university student was picked up by unidentified military officers. His lawyers claim that he was also ill-treated – beaten and threatened – while he was being held at an unknown location in the first few hours of his detention.

On 13 January, the Military court of Bangkok issued arrest warrants against six students – including these four arrested members of NDM as well as Abhisit Sapnaphapan and Thanet Anantawong. They are among 11 activists who have been charged under the National Council for Peace and Order (NCPO) Order no. 3/2015 which prohibits political gathering of five or more persons. On 7 December 2015, members of NDM together with activists from Resistance Citizen Group held a peaceful and symbolic protest ‘let’s take the train to the park’ calling for investigation into a corruption scandal. Despite the peaceful nature of the protest, authorities responded overzealously arresting 37 protestors, including six NDM student activists.

FORUM-ASIA is a  regional human rights group with 58 member organisations in 19 countries across Asia. FORUM-ASIA has offices in Bangkok, Jakarta, Geneva and Kathmandu. FORUM-ASIA addresses key areas of human rights violations in the region, including freedoms of expression, assembly and association, human rights defenders, and democratisation.