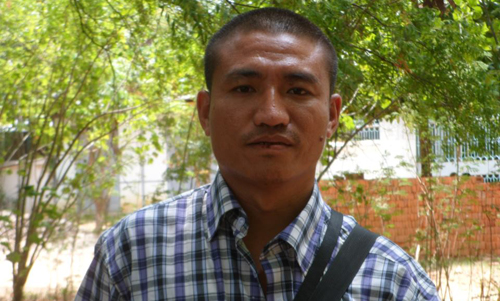 Parliamentarians from across Southeast Asia today raised concern at the re-arrest of former monk and pro-democracy leader U Gambira in Myanmar on alleged immigration offences, and called on authorities to ensure his immediate and safe release.

JAKARTA – Parliamentarians from across Southeast Asia today raised concern at the re-arrest of former monk and pro-democracy leader U Gambira in Myanmar on alleged immigration offences, and called on authorities to ensure his immediate and safe release.

“This arrest seems to be on trumped up charges and is most likely politically motivated. Gambira has sacrificed a great deal to support the rights of the Myanmar people to fight for democracy and should be treated accordingly – not hounded and thrown in jail,” said Son Chhay, Cambodian Member of Parliament and Vice Chair of ASEAN Parliamentarians for Human Rights (APHR).

“As parliamentarians with commitments to democratic values, we must raise our voices in concern when those that fight peacefully to uphold these ideals face harassment, threats, and injustice from the authorities. It’s our responsibility to seek his release, and we call on parliamentarians in Myanmar to do the same,” he added.

U Gambira, a key leader of the 2007 “Saffron Revolution,” a series of monk-led pro-democracy protests, was sentenced in 2008 to 68 years in prison for his role in the movement. He was released in an amnesty in January 2012 but has spent much of the past few years in Thailand after complaining of harassment by security officials in Myanmar. He suffers from severe PTSD as a result of alleged torture during his time in detention.

According to reports, Gambira was arrested again on 19 January at his hotel in Mandalay after returning to Myanmar from Thailand to apply for a new passport. He has reportedly been charged with entering the country illegally and faces up to five years in prison. He is currently being detained, pending an initial hearing, which has been set for 3 February.

Gambira’s arrest at this pivotal time for Myanmar is extremely concerning and risks sacrificing any potential positive legacy of the government of President Thein Sein, APHR said today.

“The outgoing military-backed government is not sending the signal that it is ready to work with other stakeholders to see Myanmar grow into an open society that upholds international human rights norms, and this has concerning undertones for the tenure of the next government,” Son Chhay said.