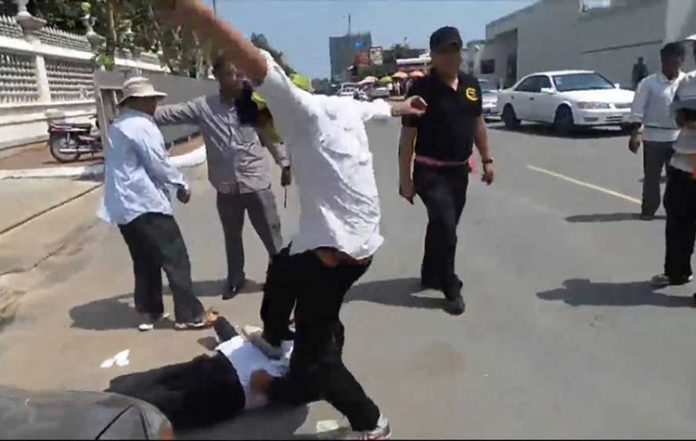 On the occasion of your upcoming official visit to Phnom Penh on 26 January 2016, we wish to take this opportunity to call upon the US to make any strengthening of bilateral relations with Cambodia contingent on the government’s significant progress in the promotion of democratic reforms and respect for human rights and fundamental freedoms.

On the occasion of your upcoming official visit to Phnom Penh on 26 January 2016, we wish to take this opportunity to call upon the US to make any strengthening of bilateral relations with Cambodia contingent on the government’s significant progress in the promotion of democratic reforms and respect for human rights and fundamental freedoms.

In November 2015, UN Special Rapporteur on the situation of human rights in Cambodia Rhona Smith stated that Cambodia was at a “dangerous tipping point.” During the past six months, judicial harassment, attacks, and detention of members and supporters of the opposition Cambodia National Rescue Party (CNRP) have significantly increased. Seventeen opposition members and supporters are currently detained or imprisoned as a result of trumped-up charges and unfair trials. One of them is Meach Sovannara, a Cambodian national who is a US citizen. Sovannara was sentenced to 20 years in prison in July 2015 on trumped-up charges of leading an insurrectionary movement.

In October 2015, CNRP National Assembly members Nhay Chamroeun, who holds dual Cambodian-US citizenship, and Kong Saphea were beaten and seriously injured outside the National Assembly in Phnom Penh. Three men, all members of the military and bodyguards of Prime Minister Hun Sen, were charged with aggravated assault in connection with the attack.

We urge you to demand an immediate end to the government’s acts of intimidation, judicial harassment, and violence against opposition officials and the immediate and unconditional release of all 17 opposition members and supporters who are currently detained or imprisoned.

During the past two and a half years, law enforcement, the military, the judiciary, and Parliament have been used by the Cambodian government as instruments to repress and silence civil society. Human rights defenders, activists, and trade unionists have been constantly targeted by government authorities. Four land and environmental rights defenders are currently detained on fabricated charges. Since the 2013 elections, government security forces have brutally repressed worker strikes and demonstrations by government critics, resulting in the killing of many protestors.

We urge you to demand the Cambodian government end all attacks against activists, human rights defenders, and trade unionists, and put a stop to its abuse of the judiciary as a tool to retaliate against activism. Following the cessation of such attacks, there must be a swift, thorough, and transparent investigation into all acts of violent repression against peaceful protestors by law enforcement officials.

Finally, we respectfully ask you that you take all necessary action to ensure that the US government discontinue any military trainings and assistance to Cambodia’s abusive armed forces.

Repression, human rights abuses, and impunity in Cambodia must stop. Economic relations will grow stronger and last only if the Cambodian government takes immediate steps to uphold democratic principles, the rule of law, and respect for human rights. This is a message that Prime Minister Hun Sen must hear loud and clear during your visit to Phnom Penh.

We thank you for your attention on this important matter.