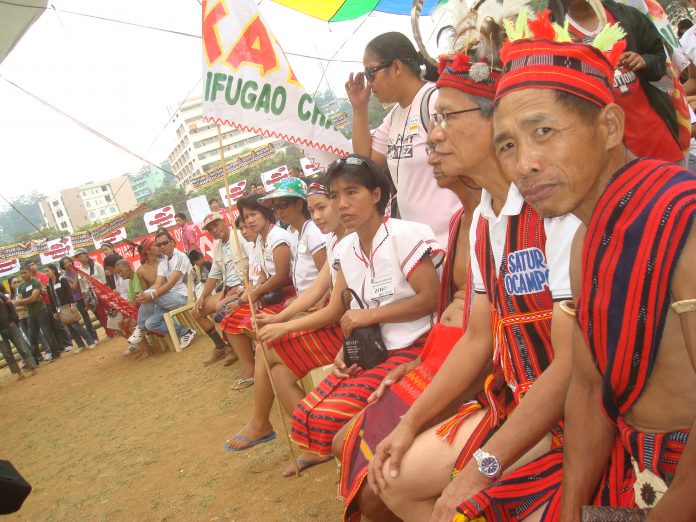 We are appealing for your support to raise concern  and denounce the heightened incidents of political vilification, surveillance and harassment against members and leaders of the Ifugao Peasant Movement (IPM), barangayi officials, local organizations and indigenous people’s rights advocates.

Dear friends,
We are appealing for your support to raise concern  and denounce the heightened incidents of political vilification, surveillance and harassment against members and leaders of the Ifugao Peasant Movement (IPM), barangay[1] officials, local organizations and indigenous people’s rights advocates.

We are alarmed and convinced that the intensity of threats and political vilification are serious warnings of actual arrest, detention and even graver forms of human rights violations. The Philippine government’s counter-insurgency policy called Oplan Bayanihan deliberately associates human rights defenders, activists and civilians as members or supporters of the revolutionary armed group New Peoples Army (NPA) to condition the public that they are “enemies of the State” or “terrorists” and thus serves as a prelude or justification to illegal arrests based on trumped up charges or even extrajudicial killings and enforced disappearance. Serious concern has to be raised against this.

Among the IPM members and staff tagged as members of NPA are: Nestor Peralta, Claudine Panayo, Billy Karty, Ben Calingayan, and Brandon Lee. Active barangay officials and local  members of people’s organizations are also vilified, including Edwin Bumolyad, barangay captain of Montabiong, Lagawe, Ifugao; Nonoy Bangtiwen, a member of the barangay council of Tulludan, Tinoc; and Dick Tangid, a member of the barangay council of Tupaya, Lagawe and the current vice chair of IPM; Ricardo Mayumi and several others. Engr. James Tayaban, a human rights defender, is also included in the vilification materials.

On 26 February 2014, posters with the heading “Rupa Ken Nagan ti NPA nga Agsusuweldo” (Faces and Names of the New People’s Army Receiving Salaries) were posted by State security forces and their agents in the market and waiting sheds of various municipalities/towns in Ifugao province. These posters unjustly tagged some of the staff of the Cordillera People’s Alliance and party lists as enemies of the state.

The labeling and tagging of these organizations and individuals are malicious, baseless and unfounded. It is unjust that those who bring services to far-flung communities of farmers and indigenous peoples are vilified and their lives threatened. Activists, development workers, non-government organizations and people’s organizations assist in providing the much needed social services and livelihood assistance to local communities and sectors suffering from severe poverty and government neglect. It is condemnable that human rights workers are being silenced by the State whose mandate is to uphold and defend human rights.

This APPEAL FOR IMMEDIATE ACTION is prepared by the CORDILLERA PEOPLES ALLIANCE.
Please send a copy of your email/mail/fax to the above-named government officials to our address below: