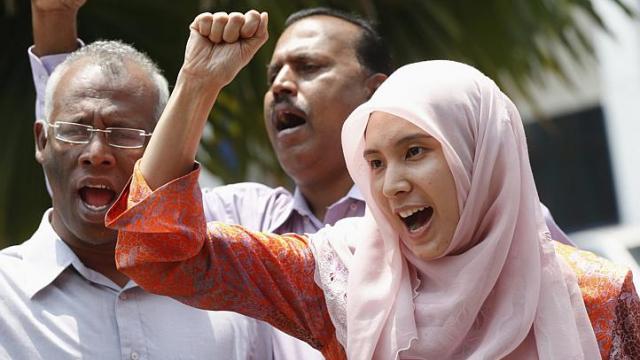 The Commission for The Disappeared and Victims of Violence (KontraS) strongly condemn the arrest of Nurul Izzah- a member of parliament and vice president of the People’s Justice Party Malaysia under section 4(1) of the Sedition Act 1948 as the result after she exercised her freedom of speech to criticized the judiciary system of the Government of Malaysia on 16 March 2015.

In her speech, Nurul Izzah is questioning Malaysia judiciary system for sentencing the Former Deputy Prime Minister, Anwar Ibrahim to 5 (five) years in Prison. We believe this arrest has violated not only the International Human Rights Law and ASEAN Declaration of Human Rights, but also the national law of Malaysia since her freedom of speech as Parliament member is protected under Parliament Immunity.

The Sedition Act 1948 under section 4 (1) charged to her violated the enjoyment of the freedom of expression. This Act regulated the charge of such offences for maximum three years imprisonment. The offences regulated in this Act, inter alia; first, the person who does or attempts to do, or makes any preparation to do,or conspires with any person to do, any act which hasor which would, if done, have a seditious tendency, secondutters any seditious words, thirdprints, publishes, sells, offers for sale, distributes orreproduces any seditious publication; last but not least, fourthimports any seditious publication.

KontraS believe the Malaysian Government shall protect the full and effective exercised of the freedom of expression, particularly freedom speech as statedon the ASEAN Declaration on Human Rights (ADHR) signed by ASEAN leaders including Malaysia in 2012. In article 23 of ADHR clearly stated that every person has the right to freedom of opinion and expression, including freedom to hold opinions without interference and to seek, receive and impart information, whether orally, in writing or through any other medium of that person’s choice.Similar with the AHRD principle to uphold the freedom of expression, Malaysia also shall respect the Universal Declaration of Human Rights (UDHR)- as the universal recognition for the basic right and fundamental freedom, in which protect the freedom of expression under article 19.

KontraS afraid the Sedition Act is used by Malaysian Government only to avoid criticism by its own people in order to secure its regime power, considering the number of cases charged by Sedition Act, particularly to Human Rights Defenders. Since the freedom of expression is essential for the functioning democracy, therefore, as the solidarity amongst ASEAN people, KontraS urges the Government of Malaysia to;

First, the Malaysian Government shall immadiately release Nurul Izzah and guarantee the enjoyment of freedom of expression Malaysian citizens.

Third, the Malaysian Government has to take into consideration to ratify the International Covenant on Civil and Political Rights as the commitment to uphold human rights and democracy within the border.

The Commission for The Disappeared and Victims of Violence (KontraS)