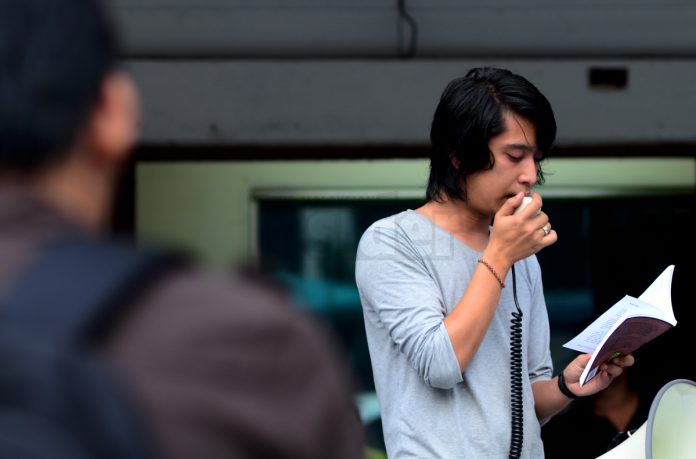 The Asian Network for Free Elections (ANFREL) views with grave concern the continued harassment and unjustified prosecution of Adam Adli Bin Abd Halim and other human rights defenders in Malaysia.

Re: Statement on the continuing persecution and attempt to silence Adam Adli

The Asian Network for Free Elections (ANFREL) views with grave concern the continued harassment and unjustified prosecution of Adam Adli Bin Abd Halim and other human rights defenders in Malaysia. In September of 2014, Mr. Adli received a 12-month prison sentence under Malaysia’s Sedition Act of 1948 for his attempt to rally protests against the serious flaws documented in the 2013 Malaysian General Election.

On the 18th of February 2016, Mr. Adli’s appeal will be heard by the Kuala Lumpur High Court. Perversely, prosecutors have filed their own appeal seeking to lengthen the existing year-long prison sentence meted out by the trial court in what appears to be part of an effort to criminalize the work of human rights activists in Malaysia. Such repressive steps are plainly inconsistent with Malaysia’s obligations pursuant to the United Nations Declaration on Human Rights Defenders, which requires that Malaysia protect those working to strengthen democracy and human rights in the country.

ANFREL is a network-based organization of twenty-three organizations working to enhance free elections and democracy across Asia. ANFREL and its members have been viewing with increasing alarm the rash of prosecutions of persons speaking on behalf of electoral reforms required to remedy the problems that were highlighted in Malaysia’s General Election in 2013. Continued attempts to silence activists such as Mr. Adli by instituting spurious legal cases will only further undermine the legitimacy of the government and the electoral system itself.

The right to peaceful protest is a foundational right in any democracy. The type of intimidation stemming from the Malaysian government’s continued abuse of the Sedition Act (which you once promised would be repealed) is a serious violation of that right. Indeed, in your own prior statements, you have stated that Malaysia’s Sedition Act is outdated and overly broad. In fact, it is all too often used primarily as a political weapon to suppress speech and dissenting voices. Instead of hunting down well-intentioned activists and jailing them for peaceful protest, the people of Malaysia need their government to reach out to individuals like Mr. Adli and groups such as Bersih 2.0 for sincere dialogue designed to restart efforts towards electoral reform.

Such compromise can still create legitimacy and foster badly needed confidence in the next election, GE14. Unsurprisingly perhaps, the country still needs electoral reform that starts with the type of inclusive decision-making that was missing from GE13. While it will soon be three years since that election, ANFREL fears that, without reform, the country is destined for a repeat of the flaws found in GE13. There were legitimate concerns about the 2013 General Election from the start, ranging from the voter list to severe malapportionment, among others. Several of the activists now facing prosecution were in fact prescient in their warnings about electoral shortcomings and, had authorities responded to their demands and embraced reform beforehand, many of the problems of GE13 could have been avoided.

Authorities’ moves to stamp out dissent through the use of draconian measures such as the Sedition Act as applied against Mr. Adli move the country backwards. Continuing down this path will not only violate the rights of victims such as Mr. Adli, but it will also draw further attention to authorities’ continued failure to address the problems revealed by Malaysia’s 2013 General Election.

ANFREL urges the government of Malaysia to drop all charges against Mr. Adli and all human rights defenders and redirect its efforts to tackling the problems that they have highlighted. Failure to do so will cause ultimately adversely affect Malaysia’s continued economic and social development. Now is your opportunity to use your leadership position to move Malaysia towards a more democratic state, and we hope that you will seize that opportunity for the good of your nation.