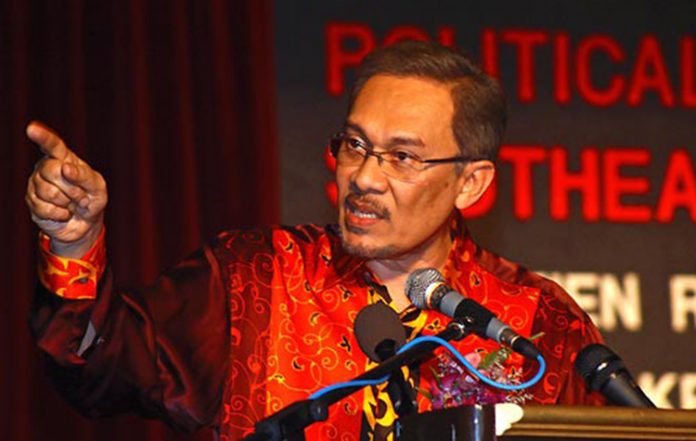 FORUM-ASIA and its member SUARAM, call for the immediate and unconditional release of Anwar Ibrahim, opposition leader and former Deputy Prime Minister of Malaysia.

(Bangkok, 10 February 2016) – Today marks one year since Anwar Ibrahim was sentenced to five years in prison, on 10 February 2015, on sodomy charges under Section 377B of Malaysian Penal Code. The Federal Court upheld the verdict of the Court of Appeals and reaffirmed his conviction. The Asian Forum for Human Rights and Development (FORUM-ASIA) and its member, Suara Rakyat Malaysia (SUARAM), call for the immediate and unconditional release of Anwar Ibrahim, opposition leader and former Deputy Prime Minister of Malaysia. The sodomy charges against him were politically motivated and are a stark reminder of the deteriorating democracy in Malaysia.

The prosecution contravened basic international fair trial standards. The section of the Malaysian Penal Code under which he was charged, relating to sodomy, stems from colonial times. It has barely been used. Two of the seven cases in which such charges were made involved Anwar, which is a strong indication that these charges were politically motivated as part of the Government’s crackdown on those who challenge the ruling Government. The shifting of the schedule his hearing by the Court of Appeals in March 2014 and the handing down of a sentence in a mere two days, prevented him from running for the State Assembly By-Elections on 23 March 2014.

“We strongly believe Anwar Ibrahim’s detention is arbitrary and politically motivated. It is unlawful to continuously detain him and we demand his immediate release. This is a great opportunity for the Malaysian Government to redeem its reputation on rule of law, justice, and human rights. To counter the doubts of the international community about the independence of the judiciary in Malaysia,” says Evelyn Balais-Serrano, Executive Director of FORUM-ASIA.

In September 2015, the United Nations Working Group on Arbitrary Detention (UN WGAD) adopted opinion No.22/2015 stating that the “deprivation of liberty of Mr. Ibrahim is arbitrary” and “the adequate remedy would be to release Mr. Ibrahim immediately”. The UN WGAD highlighted violations related to Anwar’s right to a fair trial, his right to freedom of expression and opinion, as well as his right to access to medical treatment, particularly given his physical and psychological condition.

“One year of Anwar Ibrahim’s detention marks a serious setback for democracy in Malaysia. The conviction of Anwar Ibrahim should be seen, not only as an attempt to hamper his political career, but also as an attempt of the Malaysian Government to restrict the democratic space in the country by using oppressive laws against political opposition and dissident,” adds Sevan Doraisamy, Executive Director of SUARAM.

FORUM-ASIA strongly believes Anwar’s detention is arbitrary and politically motivated. It is unlawful to continuously detain him. We call for his immediate and unconditional release, and would recognise it as a sign that the Malaysian Government is dedicated to democracy in the country.

About FORUM-ASIA:
FORUM-ASIA is a Bangkok-based regional human rights group with 58 member organisations in 19 countries across Asia. FORUM-ASIA has offices in Bangkok, Geneva, Jakarta and Kathmandu. FORUM-ASIA addresses key areas of human rights violations in the region, including freedoms of expressions, assembly and association, human rights defenders, and democratisation.