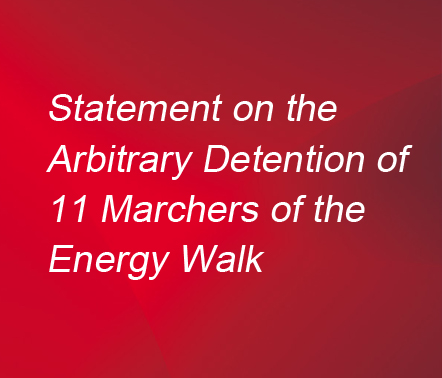 4 leaders and 7 supporters of the Partnership on Energy Reform – a platform of people proposing energy reforms to Thailand’s energy sector – were arrested on 20th August whilst on their campaign walk, entitled The Energy Walk.

4 leaders and 7 supporters of the Partnership on Energy Reform – a platform of people proposing energy reforms to Thailand’s energy sector – were arrested on 20th August whilst on their campaign walk, entitled The Energy Walk. The 4 leaders are MD. Supat Hasuwannakit, Director of Jana Hospital in Songkhla; Mr. Sakkamol Sangdara, Andaman Foundation Coordinator; Mr. Prasitthichai Nhoo-naul, an independent academic on environmental issues and Coordinator of the Network for the Protection of Nakhon Si Thamarat’s Food Resources; and Mr.Visuthi Thongyoy. The 11 marchers were arrested in Khuha Subdistrict, Rattaphum District, Songkhla Province. These marchers have been arbitrarily detained since their arrest at Senanarong army camp, Hat Yai District, Songkhla Province. The motive for arrest was the group’s violation of National Council for Peace and Order’s Order No. 7/2557 “to ban any gathering of five people and upwards and to inflict imprisonment of no more than one year and a fine not exceeding 20,000 baht or both for violation of such command.” Meanwhile, 4 members of the Partnership on Energy Reform are continuing the walk.

The Partnership on Energy Reform has been carrying out an awareness campaign on the energy sector to provide people with all the facts they need to form an informed opinion, instead of only relying on selective information. The Energy Walk campaign thus aims to give people information about Thailand’s energy sector and its needs for reform. This Energy Walk is therefore a non-partisan awareness raising campaign.

As repeatedly expressed by the leaders of the Energy Walk, this peaceful campaign is non-political and does not pose a threat to peace and order. This march is in no way a threat to national security as it doesn’t incite to public disorder. The participants are there to disseminate information and show their commitment to the energy reform proposals for the National Council for Peace and Order that the marchers are carrying.

Finally, we emphasise that International Human Rights Law prohibits emergency measures that would violate people’s Human Rights.  As International Law, to which Thailand is committed, states that “any measure by the government can only restrict certain rights to an extent strictly necessary to meet a specific threat to the life of the nation.” As the Energy Walk is in no way a threat to the life of the nation, we see that the arbitrary detention of these marchers is illegitimately confiscating their right to move freely and perform awareness raising activities. The detention of any person because of their peaceful and good intentions to educate the public is a serious and excessive violation of their rights and liberties, which are guaranteed under International Law.

We call on the National Council for Peace and Order to: