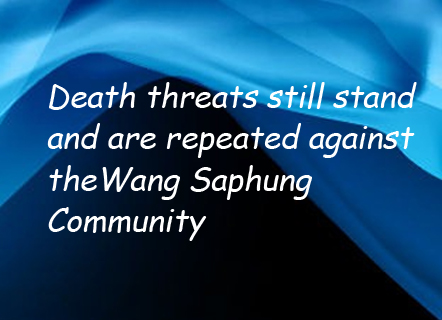 We, the undersigned 17 organisations are deeply concerned about the Wang Saphung community’s situation. The death threats against 10 community members are still standing. More worryingly, we have been told by community leader Mrs Viron Rujichaiwat – mother of a one-month old baby – that she received a phone call from an unidentified man, on the eve of the community’s reconciliation meeting – Saturday 16th August at 19:00

We, the undersigned 17 organisations are deeply concerned about the Wang Saphung community’s situation. The death threats against 10 community members are still standing. More worryingly, we have been told by community leader Mrs Viron Rujichaiwat – mother of a one-month old baby – that she received a phone call from an unidentified man, on the eve of the community’s reconciliation meeting – Saturday 16th August at 19:00. Here is the transcript of their conversation.

Moreover, the Wang Saphung community’s dispute with the gold-mining company, Tung Kha Limited Company (TKLC), is at a very tense stage. This week (19th-22nd August), the Loei Court will start the trials for the first two of seven legal cases against a total of 33 community members. This judicial harassment will drain a lot of attention and energy from the community as a whole.

The Wang Saphung’s community organization, Khon Rak Ban Kerd Group (KBRK), has also informed us on the result of their reconciliation meeting on Sunday 17th August, with TKLC representatives, which was mediated by Wang Saphung District Chief. All relevant authorities were also present, including the Maj. Gen. Woratat Supattananon (Military District Commanding Officer, Loei Province), Governor Viroj Jivarangsan, the Deputy-Governor, the Provincial Police Chief, Mr Vichai Cherdchivasart (Managing Director of TKLC), and the concerned village headmen. After the meeting the KBRK clearly told us that no agreement had been reached during the heated meeting. The company proposed no changes to the current situation, which has seen all mining operations suspended since before the 15th of May attack on the Wang Saphung community. The KBRK asked for all the legal cases against community members to be lifted in the spirit of reconciliation. This proposal was categorically refused by the company, as were all the other proposals from the Wang Saphung community representatives. As the meeting resolved none of the outstanding issues between the community and the company, the authorities concluded the meeting by calling for another reconciliation meeting between all stakeholders to take place in a month’s time.

We believe that the Wang Saphung community will continue to engage in all mediation efforts. This is because we deem that it is the community itself which has the most at stake in seeing the tense situation resolved, as they are the ones suffering both from the mining activities and from the deteriorating security situation.

We call upon the authorities to:

We call on the media to: