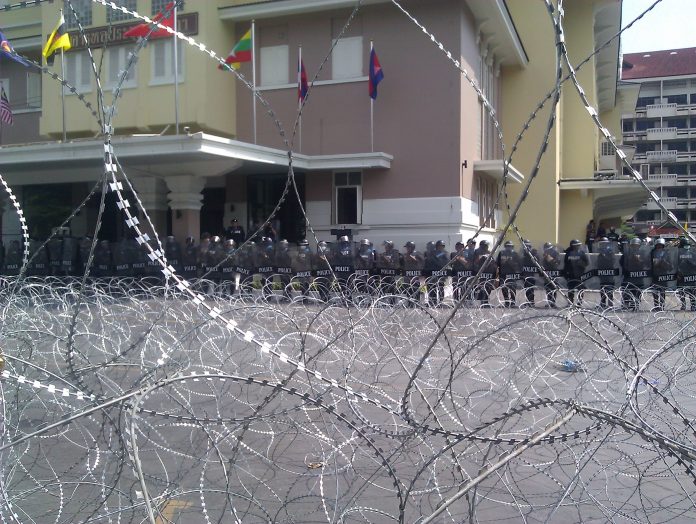 1 September 2014, TLHR and other organizing organizations have been contacted and asked my Thailand’s military officials to cancel the presentation event in reporting the situation of human rights “Access to Justice in Thailand: Currently Unavailable Human Rights Situation 100 Days after the Coup.

The Thai Lawyers for Human Rights (TLHR) in collaboration with Cross Cultural Foundation (CrCF) and Amnesty International Thailand was planning to organize a presentation of report on the situation of human rights “Access to Justice in Thailand: Currently Unavailable Human Rights Situation 100 Days after the Coup” today. But just yesterday, 1 September 2014, TLHR and other organizing organizations have been contacted and asked my Thailand’s military officials to cancel the event as they claimed the incumbent situation is still abnormal. We were told as well that if we persist to organize the event, we will face charges for violating the National Council for Peace and Order (NCPO) Announcement no. 7/2557 which prohibits any political assembly of five people upwards. TLHR wants to make our stand clear regarding the behaviour of the Thai authorities as follows;

The Thai Lawyers for Human Rights (TLHR) condemns the intimidation by security  officials and as an advocate of legal and human rights, we shall persist to uphold our duties as a lawyer to protect the people’s rights and liberties. We shall make an effort to present the report on human rights situation to mark 100 days after the coup via other channels in order to ensure that voices of the people and their families whose human rights have been abused shall continue to be heard and that they shall be bestowed on with truth and justice as well as to uphold people’s rights and liberties in general. TLHR would also insist on proposing the following recommendations as mentioned on our current report on the situation of human rights that;

With respect to the people’s rights and liberties