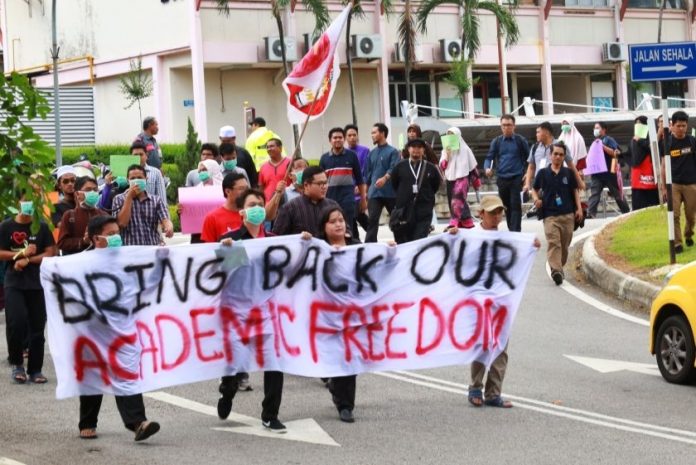 Suara Rakyat Malaysia (SUARAM) is extremely concerned with the ceaseless harassment and oppression by police, university authorities and government towards our young university student for exercising their rights to freedom of expression and assembly.

Suara Rakyat Malaysia (SUARAM) is extremely concerned with the ceaseless harassment and oppression by police, university authorities and government towards our young university student for exercising their rights to freedom of expression and assembly.

University is rightfully a place of learning and intellectual exchange and the students should have the freedom to teach or communicate ideas and current issues concerning their future without being targeted for repression, job loss and certainly not imprisonment. Further, rights to freedom of expression and assembly are clearly embedded in our Federal Constitution. It is illogical and nonsensical to criminalise an act that is fundamentally permitted by our constitution.

The harassment against student are largely due to the existence of Akta Universiti dan Kolej Universiti 1974 (AUKU), which forbids university students from being radically involved in politics. In a memorandum submitted to SUHAKAM on 5 June 2014 by Gerakan Mahasiswa Mansuhkan AUKU/Akta 1974 and 12 civil society organisations including SUARAM, 24 students were reported to have face disciplinary actions under AUKU for the first half year of 2014. All for allegedly tarnishing the university’s image as a result of their involvement in various political, economic and social issue, including protest against the Trans-Pacific Partnership Agreement, death sentence against 183 individuals in Egypt, shrinking of natural rubber prices globally etc.

Over the years, we have seen how AUKU has been used to restrict students’ activities, especially when it contravenes and threatens the status quo of the ruling coalition. Section 15 of AUKU vested huge discretionary power in the hand of vice chancellor of university to take disciplinary action against students found participated in political activities which in his judgment, is purported to “unsuitable to the interest and well-being of the students or the University”.

For the longest time, the university has been curtailing academic freedom – Dato’ Ambiga Sreevenasan, MP Tony Pua, filmmaker Fahmi Reza, and of late, Datuk Seri Anwar Ibrahim were all consistently banned from speaking within the premises of Universiti Malaya. The reason given by the authorities –  allowing the talk will tarnish the university image – is uncalled for. As a human rights NGOs, we do not see the basis for this fear. It raises profound questions on the presence of political power play by the executive and ruling coalition within the sanctity of university.

Worst still, the interference of police in the recent students assembly in university is greatly disappointing and worrying. It goes against the very fundamental role of what a university should be – an environment that nurture critical thinking and allows of exchange of ideas and opinions. The involvement of police during a peaceful student assembly is unwarranted and strengthen public conviction of rampaged abuses of power by the executive  to penalise anyone that is critical towards the establishment.

On 9 November 2014, 10 students from different university were harassed by Sabah police officers for giving a speech at Jalan Gaya, Kota Kinabalu, Sabah. And again on the same the day, the students were ejected from the University Malaysia Sabah (UMS) campus, halting them from attending a scheduled talk on student autonomy in the campus. The students were then taken to the Karamunsing police station for their second statement in Sabah.

The recent measures taken by UM and the police to halt students from public talk is damaging to academic freedom and image of our public universities.

Nevertheless, the country is seeing the silver linings of these oppression in the rise of student activism against all adversities and their dauntless spirit against oppressive authorities in defending our democratic space and fundamental liberties.

In view of the recent development, SUARAM calls for the following demands: