Home Statements - Impunity for Military Abuses Has to End 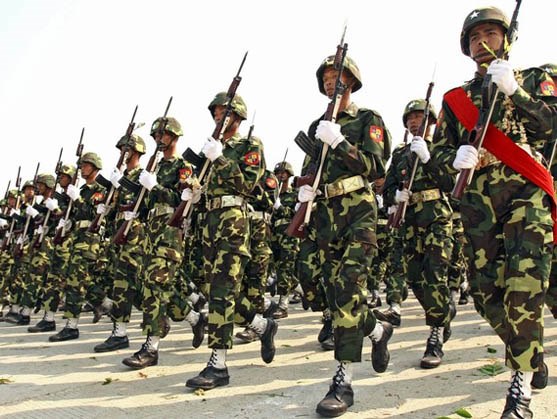 While there have been some notable political and democratic reforms – albeit now widely condemned by Daw Aung San Suu Kyi as having stalled since early 2013 – there has been no progress whatsoever as regards gross human rights abuses committed by the Burma Army.

On 7 November, the International Human Rights Clinic (the Clinic) at Harvard Law School published a Legal Memorandum which establishes that certain Burma Army commanders are guilty of crimes against humanity and war crimes under international criminal law.  The Legal Memorandum submits its findings on the basis of a three-year investigation (the Investigation) into human rights abuses associated with a Burma Army offensive in Karen State, which was launched in late 2005 and continued into 2008 (the Offensive).  The Clinic chose this offensive “because it was one of the largest in recent memory and was widely condemned by the international community.”  The Investigation focused specifically on the conduct of two military units – Southern Regional Military Command (SRMC) and Light Infantry Division 66 (LID 66) – in Thandaung Township, Karen State.

Articles 7 and 8 of the Rome Statute of the International Criminal Court (ICC) set out the legal requirements for an action to qualify as a “crime against humanity” or a “war crime,” respectively.  The essence of a “crime against humanity” is that the act in question should be “part of a widespread and systematic attack directed against any civilian population, with knowledge of the attack.”  Similarly, Article 8 stipulates that a “war crime” must be committed “as part of a plan or policy or as part of a large-scale commission of such crimes,” and must constitute a grave breach of the Geneva Conventions 1949, which regulate the conduct of armed conflict.

Various potential actions that would constitute crimes against humanity and war crimes are listed under Articles 7 and 8, respectively, many of which were allegedly committed in Thandaung Township.  The Legal Memorandum reports that the Burma Army “violently cleared civilian areas and indiscriminately attacked villagers, including by firing mortars at villagers; opening fire on fleeing villagers; destroying homes, crops, and food stores; laying landmines in civilian locations; forcing civilians to work and porter; and capturing and executing civilians.  Tens of thousands of civilians were displaced during the campaign, and many were killed.”

The Legal Memorandum goes on to name three commanders who could be held legally responsible for these crimes, under both the theory of individual criminal responsibility (Article 25) and the theory of command responsibility (Article 28).  They are: (1) Major General Ko Ko, commander of SRMC during the Offensive and currently Home Affairs Minister; (2) Brigadier General Khin Zaw Oo, commander of LID 66 until May 2006, and currently commander of the Burma Army Bureau of Special Operations; and (3) Brigadier General Maung Maung Aye, commander of LID 66 after May 2006, and subsequently promoted to be the Naypyidaw Regional Commander.  The Clinic claims to have sufficient evidence of the crimes to satisfy the standard required for an arrest warrant to be issued by the ICC with respect to these three commanders.

There are several important points which must be highlighted in the wake of the Legal Memorandum.  First, as has been highlighted in countries all over the world, from Cambodia to South Africa to Guatemala, any society that has suffered from massive human rights abuses must work out the best way of coming to terms with the legacy of those abuses and ensuring sufficient redress for victims.  For, if no justice is seen to be done, then impunity prevails, people lose trust in the political process, and there is no deterrent to ensure that such human rights abuses are never committed again.  Yet, at the same time, a balance has to be struck with regard to transitional justice: any redress mechanism must take care not to compromise or undermine peace, stability or political transition.

Thus far, Burma has chosen the path of impunity.  While there have been some notable political and democratic reforms – albeit now widely condemned by Daw Aung San Suu Kyi as having stalled since early 2013 – there has been no progress whatsoever as regards gross human rights abuses committed by the Burma Army.  Not only is impunity for military crimes institutionally enshrined by the flawed and undemocratic 2008 Constitution, the Myanmar National Human Rights Commission is prohibited from investigating military abuses.

Without any deterrent, the abuses persist to this day.  Civilian populations in Kachin and northern Shan States continue to be targeted with a systematic pattern of military offensives and gross human rights abuses, while last month saw six Karen civilians shot dead and independent journalist Aung Kyaw Naing (a.k.a. Par Gyi) tortured and killed by the Burma Army in response to his coverage of the recent outbreak of fighting in Karen State – among other military abuses in Karen State.

It is clear then that the current path of impunity is not working.  As an absolute minimum, it is vital that the Burma Army is brought under civilian control and supervision as a matter of urgency, and that criminal commanders are not part of the current government.  Furthermore, the Burma people must decide for themselves the best way of approaching the thorny issue of transitional justice.  As in Cambodia, it might be that the country’s best interests are served by bringing those most criminally responsible for gross human rights abuses to justice – whether through the ICC (Sierra Leone and Liberia) or a reformed domestic judiciary (Guatemala) or even  a hybrid court (Cambodia) – so as not to alienate the rank and file of the Burma Army.  An alternative model might be a South African style “truth and reconciliation commission.”

Yet, as things stand, the political reforms and peace process are in grave danger of imploding, while the abuses continue unabated.  Whatever path is chosen, something must be done to end the decades-long impunity enjoyed by the Burma Army.