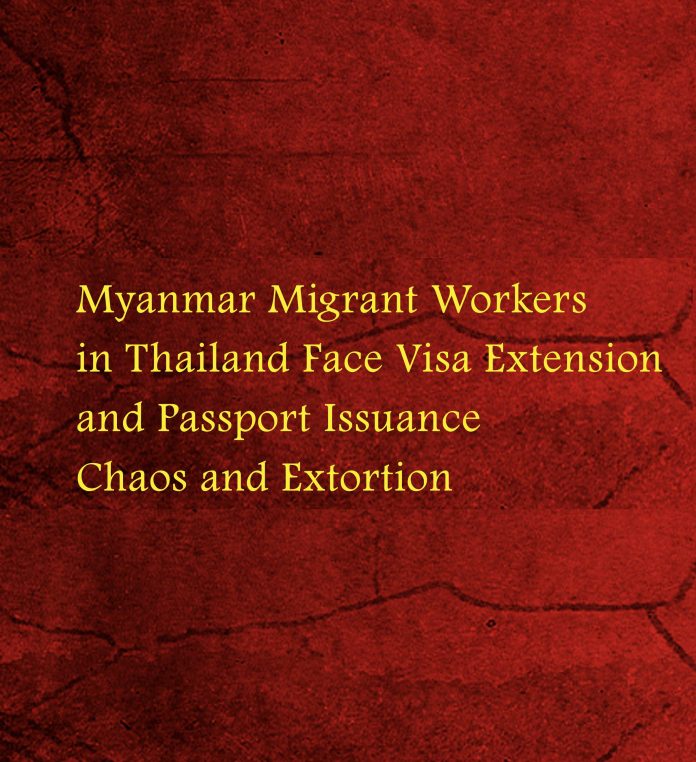 There are currently 2.5 to 3 million workers from Myanmar in Thailand. Since June 2009, these migrants had to enter a national verification process (NV) involving Thai/Myanmar government officials, in line with a 2003 MOU on Cooperation in Worker Employment. On completion of NV, workers became regularised through issuance of a temporary Myanmar passport with validity of 6 years, a 2 year Thai visa and a Thai work permit. In line with the 2003 MoU, the 2-year NV visa was extendable only for 2 years prior to a compulsory return to country of origin for at least 3 years. By August 2013, over 1.7 million migrants had completed the NV process.
The 4 year limit on working in Thailand imposed by the 2003 MoU, effective since June 2013, has proved impractical for Myanmar workers and their employers. As a result, in September 2013 mid ranking officials from both countries agreed to find a way to allow these workers to remain in Thailand beyond 4 years. This agreement on extension of stay permission was not then transparently implemented in a timely and clear fashion and the processes involved for workers remaining in Thailand beyond 4 years remain worryingly vague.
In addition, the Myanmar government has now announced a policy to change temporary NV passports to permanent passports for all Myanmar workers in Thailand. This decision is causing great angst for workers as reportedly a family registration certificate and ID card is required. Many workers, particularly from countryside areas, never had such documents. In addition, many workers have different names on temporary passports and official documents. Workers with temporary passports already have social security and life insurance benefits, own vehicles and have bank accounts. All of these benefits are now at risk. More than 1.7 million Myanmar workers already went through an expensive and time consuming NV process. It is unacceptable if these workers now have to go through another verification process for a permanent passport when they should be able to use their existing passport as proof of identity. Myanmar’s decision to require migrants in Thailand to hold permanent passports has not been carefully considered.
Currently procedures for workers to remain in Thailand beyond 4 years and for issuance, extension or renewal of temporary or permanent passports remain unclear. As has been seen before with the former and untransparent NV process, this policy vacuum and lack of procedural clarity means employers and workers must rely on expensive and unregulated Thai and Myanmar labour agents or brokers for information and to navigate complex procedures.
Already more than 1.7 million Myanmar workers have been cheated by agents, brokers, employers and officials for the 1, 050 Baht official costs of the previous NV process and documents as they had to pay 5 to 10 times that amount to complete NV. Workers are now really scared and becoming angry that they may face the same exploitative circumstance again now that their permission to remain in Thailand beyond 4 years has expired.
This policy chaos and lack of transparency already means more than 100, 000 Myanmar workers in Thailand are irregular as their stay permission of 4 years has expired. These workers cannot extend their visas and are subject to a daily 500 baht overstay fee whilst the risk and reality of exploitation and extortion are increasing. Workers are being dismissed by employers and cheated by agents and employers offering fake or expensive documents. More worryingly, such workers are increasingly being arrested and extorted by law enforcement officials or forced to buy unlawful protection cards in some provinces.
At this time of crisis in Thailand’s migration policy, the Ministry of Labour has now  also announced to implement from 1st March 2014 a law requiring collection of 1, 000 baht from migrant workers’ salaries to pay into a deportation fund in case of unlawful overstay and deportation. This policy is an act of discrimination as only workers from Myanmar, Laos and Cambodia are forced to pay the fee whilst other nationalities are not.
The Migrant Worker Rights Network (MWRN), established by Myanmar migrant workers in Thailand since 2009, demand that the Myanmar government come to our urgent assistance. In addition, we urge the Thai and Myanmar governments to urgently consider the following recommendation in order to protect the well-being of all migrant workers in Thailand:
1.      Myanmar workers should be able to renew or extend existing temporary NV passports and should not be forced to apply for a permanent Myanmar passport
2.      Procedures for extension of stay permission beyond 4 years and passport renewal or extension should be transparent and accessible for employers and migrants too navigate without compulsory use of expensive and unregulated brokers or agents
3.      Centers for processing visa extensions and passport renewal or extension should open close to migrant populations and not only in risky border areas
4.      No workers whose visas have expired should be fined for overstay caused by the existing migrant stay permission extension policy vacuum
5.      The policy requiring a deposit of 1, 000 Baht into a deportation fund should be revoked