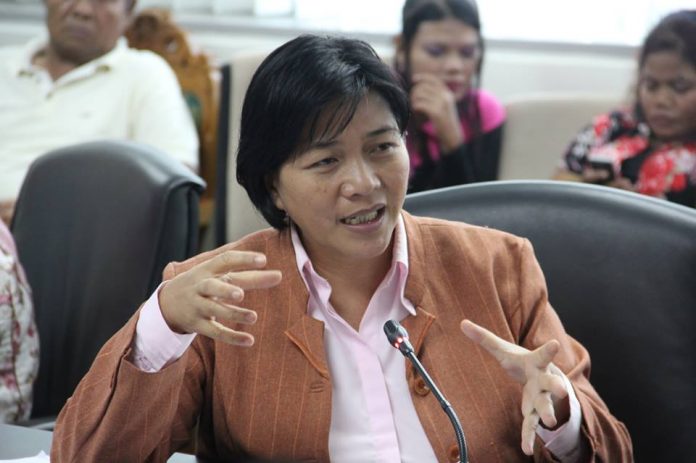 Civil society organizations around the world, in a petition today, condemned the ongoing judicial harassment and intimidation against Jannie Lasimbang, a prominent human rights and indigenous rights leader, and called for dropping all the charges against her immediately

24 January 2016 – Civil society organizations around the world, in a petition today, condemned the ongoing judicial harassment and intimidation against Jannie Lasimbang, a prominent human rights and indigenous rights leader, and called for dropping all the charges against her immediately.

The organizations affirmed that the targeted prosecution of Lasimbang, among other rights activists, is indicative of closing space for civil society in Malaysia and urged the Government to put an end to it in order to uphold values of democracy and human rights. More than two hundred organizations have signed on to the petition sent to the Malaysian Prime Minister Najib Razak and other authorities.

Lasimbang is a former vice-chairperson of the Coalition for Free and Fair Elections (Bersih 2.0), a campaign endorsed by over 60 Malaysian NGOs seeking electoral reforms and promotion of democratic rights in Malaysia. She is facing multiple charges under Peaceful Assembly Act 2012 for her role in the fourth series of peaceful assemblies of the Coalition (Bersih 4.0). The assemblies were held on 29 and 30 August 2015 in major cities in Malaysia including Kuala Lumpur, Kota Kinabalu and Kuching, as well as over 70 cities around the world.

The overnight rally in Kota Kinabalu had more than 3,000 people in attendance but ended two hours shy of its 24-hour target after a police barricade stopped some 1000 participants of the assembly from walking towards the city. The police had questioned Lasimbang along with others for their alleged role in organizing the event, , immediately after the Bersih 4.0 assembly ended. She was not arrested; it therefore came as surprise for her to be charged nearly two months later on 21 October.

The Kota Kinabalu Magistrate Court charged her under the Peaceful Assembly Act for having allegedly organised the Bersih 4.0 assembly at Likas Bay Park without giving a 10-day notice to the city police chief prior to the event. She is charged for two counts of the same charge, one for of each day of the 2-day event. Later in November, Maria Chin Abdullah, Chairperson of Bersih 2.0 was also charged under the Act.

Although Bersih Sabah had submitted the form required for the 10-day notice, the failure to append a consent letter from the owner of the Likas Bay Park (City Hall) was construed as not giving the 10-day notice.

The Kota Kinabalu Magistrate allowed Lasimbang bail of RM3,000 (approx. USD 697) with a deposit of RM1,000 (USD 232) for each charge. The court hearing was initially scheduled for 23 and 24 November 2015 and later rescheduled to 26 and 27 January 2016. It has since been postponed again. She has pleaded not guilty. In the petition, the organizations expressed grave concerns that if convicted, Lasimbang faces a maximum fine of RM20,000 (USD 4646).

“The selective prosecution of Lasimbang and other activists constitutes violations of national and international human rights obligations of Malaysia, including under UN Declaration on Human Rights Defenders, as affirmed by the organizations in the petition,” said Yusri Ahon, President of the Indigenous Peoples Network of Malaysia, also known as Jaringan Orang Asal SeMalaysia (JOAS).

Lasimbang, a former commissioner of the National Human Rights Commission of Malaysia (SUHAKAM) has also served in the Expert Mechanism on the Rights of Indigenous Peoples of the UN. She is former Secretary General of Asia Indigenous Peoples Pact (AIPP) and currently at the forefront of indigenous rights advocacy in Malaysia with JOAS.

“The organizations have thus called on the Malaysian authorities to immediately drop all charges against them and rather engage constructively with the human rights activists for advancement of human rights and fundamental freedoms in Malaysia.”