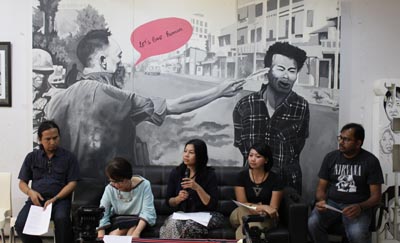 KontraS together with Indonesian academics and anti-death penalty network deplore the stance of Indonesian Government that insisted will carry out the execution of second death row in the near future. Thursday 23 April 2015, Attorney General’s Office has issued a warrant for the execution.

The Commission for the Disappeared and Victims of Violence [KontraS] together with Indonesian academics and anti-death penalty network deplore the stance of IndonesianGovernment that insisted will carry out the execution of second death row in the near future. Thursday 23 April 2015, Attorney General’s Office has issued a warrant for the execution. The families and the Foreign Embassies who became the convict had received the same notice. The list of next executions are believe to be Andrew Chan [Australia], Martin Anderson alias Belo [Ghana], Mary Jane Fiesta Veloso [Philippines], Myuran Sukumaran [Australia], Raheem Agbaje Salami [Nigeria], Rodrigo Gularte [Brazil], Sergei Areski Atlaoui [France], Zainal Abidin [Indonesia], Sylvester Obiekwe Nwolise [Nigeria] and Okwudili Oyantanze [Nigeria].

In this case, Indonesian Government did not learn from the first row of execution that full of error. Supreme Court even disregard the facts of law which proves that the defendant has been through the legal process that is not fair and defect of law. The absence of legal counsel or the uncapable legal counsel only be given just to meet the administrative requirements alone,uncapable translator or interpreter for foreign convict, delays in informing the embassy of the convict, and the process of law that only consider the evidence from investigators and public prosecutors. Even one of the brazilian convict, Rodrigo Gularte sentenced to die by the court although known still suffering from schizophrenia and bipolar disorder therefore not capable of law.

Those facts mentioned above has violated the UN Safeguards Guanteeeeng Protection of the Rights of Those Facing the Death Penalty contains the human rights protection for the death row inmates.  Article 3 of the Safeguards states the death penalty must not be done to the people suffer mental illness. Meanwhile, Rodrigo Gularte is the one who suffers mental illness yet the government insisted to execute him. Furthermore, Article 8 confirms that the death penalty shall not be carried out pending any appeal or other recourse procedure or other proceeding relating to pardon or commutation of the sentence. Zainal Abidin, the convict from Indonesia is still submitted his second judicial review, yet the government put his name in the list of convicts to be executed in the second batch. This implies the Indonesian government’s inability to meet the minimum standards of international law to protect the rights of the death row inmates.

Meanwhile, in the diplomacy aspect, executions in Indonesia would only further complicate advocacy efforts of  the government of Indonesia to the citizen who threatened execution abroad. Indonesia is unable to provide protection to its own citizen facing death penalty abroad and minimum standard to protect the rights of the death row inmates of foreign nationals. This clearly symbolizes the double standards the Indonesian Government in order to upholds human rights.

Based on the above, we demand the Government of Indonesia to :

The Commission for the Disappeared and Victims of Violence [KontraS]