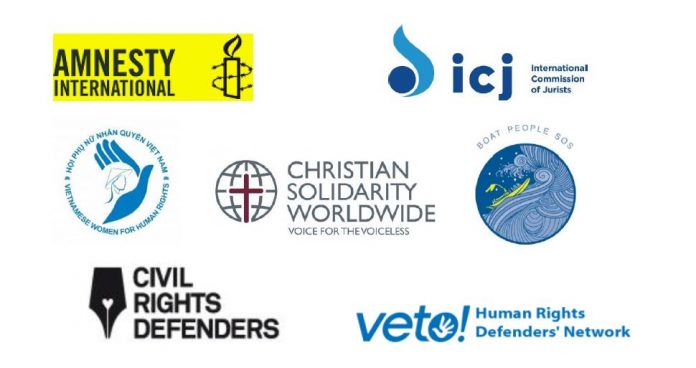 Nguyễn Văn Đài and Lê Thu Hà were arrested on 16 December 2015 and charged under Article 88 of the Penal Code, ‘Conducting propaganda against the state’. All efforts by family and legal counsel to visit the pair since their arrests have been denied.

Viet Nam must end the ongoing incommunicado detention of human rights defenders Nguyễn Văn Đài and Lê Thu Hà which is in violation of their human rights, including the right to freedom from torture and other cruel, inhuman or degrading treatment or punishment. All charges against Nguyễn Văn Đài and Lê Thu Hà, who Amnesty International has designated prisoners of conscience, should be withdrawn and they should be immediately and unconditionally released.

Nguyễn Văn Đài and Lê Thu Hà were arrested on 16 December 2015 and charged under Article 88 of the Penal Code, ‘Conducting propaganda against the state’. All efforts by family and legal counsel to visit the pair since their arrests have been denied.

The UN Convention against Torture and Other Cruel, Inhuman or Degrading Treatment or Punishment came into force in Viet Nam in 2015. In addition, as a party to the International Covenant on Civil and Political Rights, Viet Nam is also obligated to uphold the rights of persons deprived of their liberty, including to be brought promptly before a judge and to access to legal counsel, as well as to be treated with humanity and dignity. These are rights which are violated by incommunicado detention.

Article 88 of the Vietnamese Penal Code outlines crimes of ‘Infringing national security’. While Article 58 of the Criminal Procedure Code provides for the suspension of the participation of legal counsel in cases involving charges of infringing national security until the conclusion of the investigation, Article 58 specifically violates the right of access to legal counsel under international human rights law, and deprives detainees of an essential safeguard against torture or other ill-treatment, the prohibition of which is absolute.

The UN Body of Principles for the Protection of All Persons Under Any Form of Detention or Imprisonment state that communication of a detained individual with family or counsel shall not be denied for more than a matter of days. In the current case, Nguyễn Văn Đài and Lê Thu Hà have been denied access to family and counsel for more than two months. This is a prolonged period of incommunicado detention by any measure and constitutes a violation of the prohibition on torture and other ill-treatment.

Dr. Nguyễn Đình Thắng, President and CEO of Boat People SOS and co-founder of Campaign to Abolish Torture in Vietnam, commented: “We find the arbitrary arrest and incommunicado detention of Nguyễn Văn Đài and Lê Thu Hà particularly troubling; their treatment underlines Vietnam’s lack of good faith when it ratified the UN Convention against Torture.”

Background
Incommunicado detention of prisoners of conscience is in-built into Viet Nam’s system of intimidation, harassment and punishment of peaceful activists. Following arrests, activists are usually held without access to the outside world for periods of months and even years. During this period, activists are often subject to other violations, including torture or other ill-treatment, through prolonged solitary confinement and severe physical abuse.