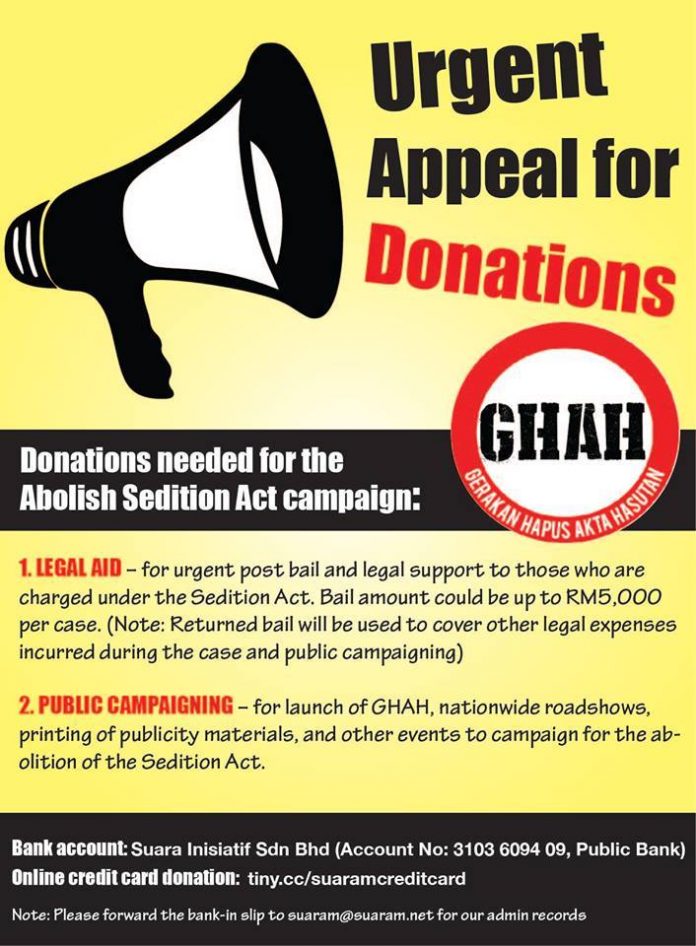 Gerakan Hapus Akta Hasutan (GHAH) welcomes KL Sessions Court’s decision on 1 October 2014 to grant Prof Dr Azmi Sharom’s application to challenge the constitutionality of the 1948 Sedition Act at the High Court. We hope this will mark the first step towards the abolition of the colonial-era legislation and exemplify judiciary’s willingness in upholding the rule of law and the guardian of the rights of the people in sedition cases.

Following this court’s decision, we call on the police and the Attorney General to impose an immediate moratorium on the use of the Sedition Act on new cases and to stop pursuing existing cases until the constitutionality of the Sedition Act has been determined by the judiciary.

This is clearly necessary in view of the Sedition Act was never passed by our Parliament and the Federal Constitution is clear that any restriction of the rights of the people shall only be legitimately done through parliamentary legislation. The Sedition Act is a piece of repressive legislation established by the British colonial government in 1948 to suppress expression and opinion among our forefathers who were striving for independence of our country. It is a disgrace to the nation that this law remains in the book despite the country attains its independence since 1957.

In the past two months, we have seen the biggest crackdown against citizens since Operasi Lalang in 1987. According to SUARAM’s monitoring, since August 2014, at least 17 individuals had been probed under the Sedition Act and a total of 8 individuals had been charged. Such stark increase in the use of the draconian Sedition Act has had a chilling effect across all public discourse in the country and it is seen as a government’s scheme to curtail civil liberties and stifle freedom of speech.

We strongly question if the prime minister is still in control of his government in view of the police continuing to blatantly ignore his public pledge to repeal the Sedition Act and invoke the Sedition Act arbitrarily. The speech of the prime minister about fighting extremism with moderation clearly rings hollow when he himself is allowing extremists in his party and non-state actors such as Perkasa and ISMA to hold hostage of the country at the expense of the rights and freedoms of the majority in the population.

We warn the prime minister that his failure in tackling political motivated incitement of racial and religious extremism, will not only tarnish his image and legacy, but would plunge the country into the abyss of extremism.

It is in this light also that we call on all peace and justice loving Malaysians, regardless of race and religion, to join hand to defend our country from extremism.

GHAH calls on all victims of the Sedition Act to report their case to GHAH at gerakan.HAH@gmail.com or fax: 03-77843525 and seek legal assistance from GHAH if necessary. GHAH is pleased to announce that a team of lawyers has been formed by Lawyers for Liberty, the National Young Lawyers Committee and the Human Rights Committee of Bar Council to defend all victims of the Sedition Act.

GHAH also wishes to announce that its third public forum will be held at Pusat ENGAGE, 55-A, Jalan Molek 2/4, Taman Molek, Johor Baru at 3.00pm on 4 October 2014. The public forum will be conducted in Malay/English  and the three speakers are chairperson of National Young Lawyers Committee, Syahredzan Johan, executive director of SUARAM, Yap Swee Seng and chairperson of ENGAGE, Thomas Fann.

GHAH calls on the public to extend their solidarity with those investigated or charged under the Sedition Act by not eating out on 11 October 2014 and the amount of money saved for that day to be donated the GHAH fund in order to support the victims of the Sedition Act. The donation can be banked into the Suara Inisiatif Sdn Bhd, Public Bank account number 3103 6094 09.