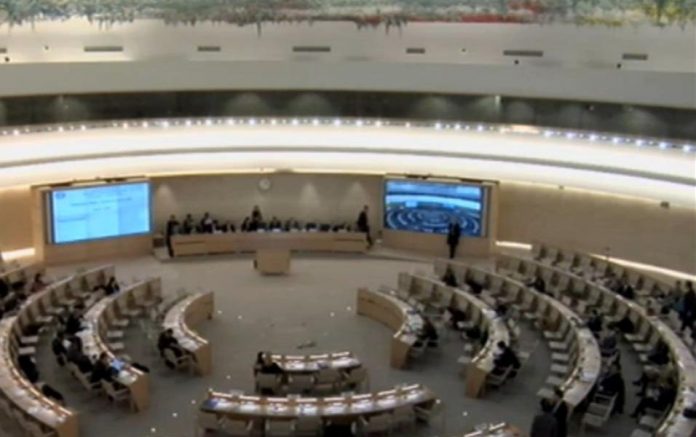 FORUM-ASIA together with its members, ADHOC and LICADHO appealed to the UN Human Rights Council not to lose sight of the human rights situation in Cambodia and urged the Cambodian government to show serious commitment to implement recommendations put forward by an independent UN expert over the past 6 years.

The UN Special Rapporteur on the situation on human rights in Cambodia[1], Prof. Surya Subedi presented his final report[2] to UN member states and civil society at the Council’s 27th session that concluded last week. At the end of his 6-year term Prof. Subedi concluded that, though the political environment may have changed in Cambodia, the fundamentals of governance and human rights protection have not. The Special Rapporteur undertakes regular missions to Cambodia and reports annually to the Human Rights Council, in addition to addressing individual cases including through complaints submitted on human rights violations. “The lack of substantive response from the Cambodian government to any of the five communications over the past year is alarming, considering the fact that these include allegations of excessive use of force by law enforcement officials resulting in deaths and injuries, as well as their use of arbitrary arrest and incommunicado detention, including of human rights defenders,” said Evelyn Balais-Serrano, Executive Director of FORUM-ASIA.

FORUM-ASIA and others including the World Organisation Against Torture (OMCT), the International Federation for Human Rights (FIDH) and CIVICUS: World Alliance for Citizen Participation, organised a side event to brief UN member states and civil society organisations on the situation of human rights defenders in Cambodia. Speaking at the side event, the Special Rapporteur recommended that government authorities in Cambodia “protect human rights defenders and especially those defending land rights and workers’ rights, so that they may be able to carry out their work without intimidation and harassment.”

Land rights activist Chan Puthisak spoke of attacks and threats against grassroots defenders by security forces, companies and the judiciary. Puthisak himself was arrested and beaten by paratroopers, when he joined a peaceful protest for an increase in minimum wages. He was charged along with 22 others and detained for nearly 6 months before being given a suspended prison sentence of 4.5 years. Puthisak remains committed to protecting freedom of expression and assembly in Cambodia and called on civil society to support human rights defenders in Cambodia in this endeavour.

Am Sam Ath, of LICADHO, expressed his concern about several legislative changes. “Three recently passed laws on the judiciary severely compromise the independence of courts and grant the executive a number of powers. The lack of consultation with civil society in drafting laws sets a dangerous precedent as the government moves ahead with several draft laws which would firmly restrict the freedoms of expression, peaceful assembly and association,” shared Sam Ath. These laws include the draft Cyber crime Law, which would significantly restrict freedom of expression by criminalizing the publication or sharing of online content under vague and arbitrarily defined provisions; the draft Law on Unions of Enterprises (Trade Union Law), which threatens freedom of association of trade unions through prohibitive registration requirements and delegates a number of powers that should be within the sole authority of the courts to the Ministry of Labour; and the draft Law on Associations and NGOs, which contains significant restrictions, including lack of administrative appeal in cases of denial of registration and additional restrictions on foreign NGOs. Combined with a draft Law on Telecommunications that would give the government authority to take control of internet service providers, these draft laws seem aimed at crippling a vibrant civil society and dissident voices from the growing online community.

“We urge the Cambodian government to respond promptly and substantively to all of the Special Rapporteur’s communications and give due consideration to the many serious and comprehensive recommendations made in his reports,” concluded Balais-Serrano. “We regret that despite the technical assistance offered by the Council and the OHCHR, the Cambodian government has not presented a plan of action for implementing recommendations and reforms, many of which remain pending. In this context, continued and sustained attention of this Council on the human rights situation in Cambodia remains crucial.”