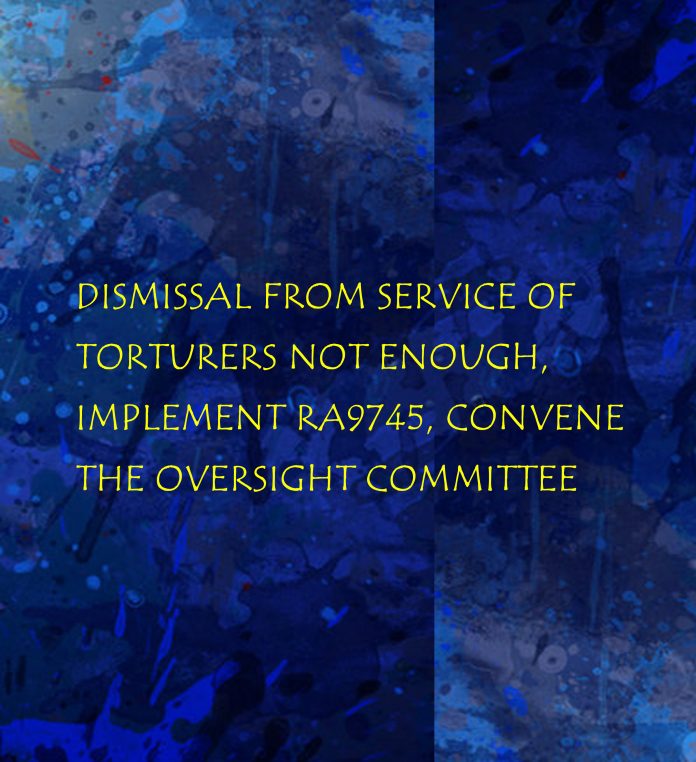 Suspension and dismissal from service of the 10 suspected torturers are not enough. Cases should be filed against the alleged perpetrators under the Anti-Torture Law (ATL) or RA9745 and prosecute torturers.
The alleged torture of detainees if proven should not only penalize the 10 police personnel.  Their immediate superiors should also be held liable. The ATL provides,
The immediate commanding officer of the unit concerned of the AFP or the immediate senior public official of the PNP and other law enforcement agencies shall be held liable as a principal to the crime of torture or other cruel or inhuman and degrading treatment or punishment for any act or omission, or negligence committed by him/her that shall have led, assisted, abetted or allowed, whether directly or indirectly, the commission thereof by his/her subordinates. If he/she has knowledge of or, owing to the circumstances at the time, should have known that acts of torture or other cruel, inhuman and degrading treatment or punishment shall be committed, is being committed, or has been committed by his/her subordinates or by others within his/her area of responsibility and, despite such knowledge, did not take preventive or corrective action either before, during or immediately after its commission, when he/she has the authority to prevent or investigate allegations of torture or other cruel, inhuman and degrading treatment or punishment but failed to prevent or investigate allegations of such act, whether deliberately or due to negligence shall also be liable as principals.
Moreover, they should also be held liable for maintaining a “secret prison” in Binan, Laguna. Section 7 of RA 9745 states that
Prohibited Detention. – Secret detention places, solitary confinement, incommunicado or other similar forms of detention, where torture may be carried out with impunity.
This is also to urge the Commission on Human Rights to convene the oversight committee, as provided by the law. The committee shall be composed of representatives from both houses of Congress for the purpose of monitoring compliance to the act.