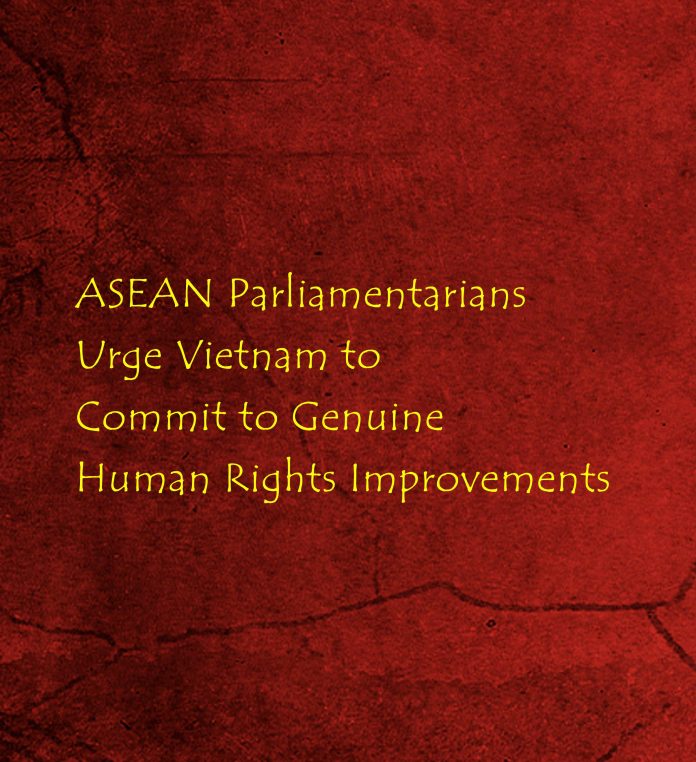 BANGKOK, 4 February – Parliamentarians from across Southeast Asia today called on UN member states and the government of Vietnam to use this week’s Universal Periodic Review (UPR) to establish genuine and measurable advancements in human rights in the country and arrest the recent decline in the rights situation there.
The United Nations Human Rights Council is scheduled to examine the second UPR of Vietnam on Wednesday 5 February.
“As perhaps a somewhat freer voice of Southeast Asian parliamentarians and less shackled by the confines of the ‘ASEAN Way’, we urge UN member states to use the UPR as an opportunity to press Vietnam to commit to genuine and measurable improvements in human rights,” said Eva Sundari, President of ASEAN Parliamentarians for Human Rights (APHR).
“There is increasing concern in the region that the Vietnamese government is moving in the wrong direction in terms of human and social and political rights. The UN must take this opportunity to engage with the Vietnamese authorities and urge it to change course.”
It’s also an opportunity for Vietnam to openly engage with the international community and its regional neighbours on this issue. It is in the interests not only of the Vietnamese people but also of its government and everyone in the region to address these rising concerns, APHR said.
Of primary concern is the increasing harassment, intimidation and violation of human rights of civil society actors and ordinary citizens, including the use of repressive laws to stifle freedom of expression in the country. Over the past 12 months, APHR has received credible reports of serious human rights violations perpetrated by the state against peaceful activists and human rights defenders by the authorities. These include allegations of beatings, sexual assaults, harassments, arbitrary arrest and “administrative detention” in labour camps and psychiatric institutions by police and other authorities.
APHR is also concerned by the introduction of new legal measures that restrict the human rights of the Vietnamese people in direct conflict with its international obligations, such as Decree 72 on the use of the Internet, and Decree 92 on religion.
Vietnam is a state party to five core UN human rights treaties but domestic legislation does not yet reflect the international standards it has signed up to. To the contrary, “national security” provisions in the Criminal Code criminalize freedom of opinion, expression and religion. APHR calls on the Vietnamese government to repeal discriminative laws and practices, and abolish administrative detention, and urges the UN Human Rights Council to impress the urgency and importance of these reforms.
These concerns must be raised at the UPR this week and the government urged to ensure domestic laws meet the minimum standards of international treaties it is a party to, APHR said. ASEAN states must begin to move together in the same and right direction that leads toward increased social, political and economic equality and regional peace and stability.
“The Association of Southeast Nations is no greater than the sum of its parts, and Vietnam is as an important member as any other. Across the region there is much work to do in terms of securing the basic human rights of our citizens and ensuring our government’s do not abuse those rights,” said Son Chhay, Cambodian Member of Parliament and vice president of APHR.
“We must start by holding our government’s accountable: Vietnam made firm promises to improve human rights at its last UPR in 2009 but it has not only failed to uphold those pledges, it has become even more restrictive in that time.”
APHR reiterates calls from civil society and other groups, including the International Federation of Human Rights (FIDH) and the Vietnam Committee on Human Rights, calling for UN Member States to urge the Vietnamese Government to commit to the following:
– Abrogate Ordinance 44 on Administrative Detention which legalizes detention without trial under house arrest, in rehabilitation camps or in psychiatric institutions;
– Cease harassments, Police brutality and surveillance of human rights defenders, bloggers and peaceful activists;
– Cease censorship of the press, Internet and Blogs and authorize the publication of independent newspapers;
– Repeal Article 4 of the Constitution on the mastery of the Communist Party and allow the establishment of independent political parties, as well as free trade unions and independent civil society;
– Improve women’s rights by enforcing anti-trafficking legislation, ceasing coercive birth control, and implementing provisions in the Land Law that ensure women’s right to land;
– Re-establish the legitimate status of the Unified Buddhist Church of Vietnam (UBCV) and all other non-recognized religious organizations; release UBVC leader Thich Quang Do;
– Cooperate with international human rights mechanisms by extending a standing invitation to the UN Special Rapporteurs on Human Rights Defenders, Freedom of Expression and the UN Working Group on Arbitrary Detention, and fix a date for the visit of the Special Rapporteur on Freedom of Religion and Belief.