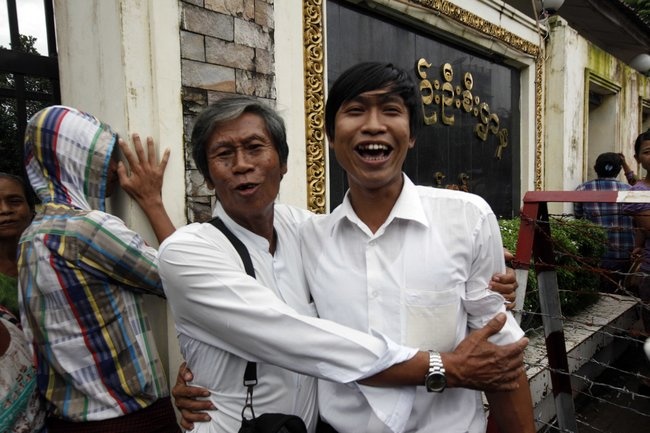 Five journalists jailed on anti-state charges in Myanmar were released on Thursday in a presidential amnesty of nearly 7,000 prisoners, according to news reports. The Committee to Protect Journalists welcomes the journalists’ release but calls on Myanmar authorities to release all other journalists imprisoned in the country.

Bangkok, July 31, 2015–Five journalists jailed on anti-state charges in Myanmar were released on Thursday in a presidential amnesty of nearly 7,000 prisoners, according to news reports. The Committee to Protect Journalists welcomes the journalists’ release but calls on Myanmar authorities to release all other journalists imprisoned in the country.

Kyaw Zaw Hein, a reporter for the now-defunct newspaper Bi Mon Te Nay; the paper’s editors, Win Tin and Aung Thant; and its publishers, Yin Min Tun and Kyaw Min Khaing were sentenced to two years in prison in October on charges of defamation under Article 505(b) of the penal code, an anti-state provision. It was not immediately clear if any conditions were attached to the journalists’ release.

The journalists were arrested on July 8, 2014, the day after a front-page story ran in Bi Mon Te Nay that repeated an activist group’s false claim that opposition leader Aung San Suu Kyi and ethnic group leaders had formed an interim government to replace President Thein Sein’s quasi-civilian administration. The report was deemed politically sensitive because Suu Kyi served 15 out of 21 years under house arrest under the previous military junta in which Thein Sein served as prime minister.

In a private meeting with Myanmar’s Ministry of Information in March in the capital, Naypyidaw, CPJ called for the release of all journalists jailed in relation to their work. At least 10 journalists, including the five affiliated with Bi Mon Te Nay, were behind bars in Myanmar when CPJ conducted its annual prison census on December 1.

“CPJ welcomes the early release of Bi Mon Te Nay journalists but regrets that the presidential pardon went only halfway in liberating all of Myanmar’s wrongfully imprisoned reporters,” said Shawn Crispin, CPJ’s senior Southeast Asia representative. “President Thein Sein should now pardon the five other journalists his government is holding behind bars and drop all of the pending lawsuits his administration has filed against the media.”

Myanmar is among the 10 most censored countries in the world, according to a list compiled by CPJ of places where the press is most restricted. CPJ has repeatedly called on the Myanmar government to stop using threats, harassment, and imprisonment to intimidate the media.