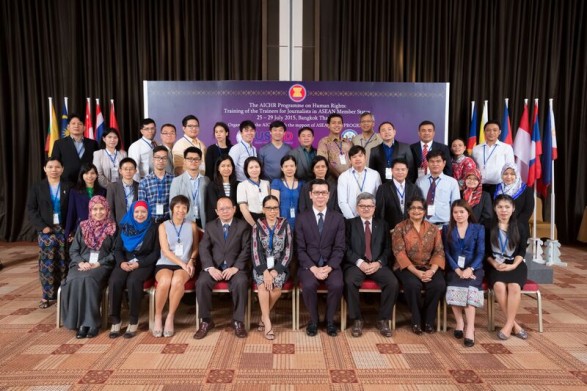 Around thirty five journalists from all ten ASEAN Member States attended the five-days training programme in Eastin Grand Hotel, Bangkok which was organized by the Representative of Thailand to the ASEAN Inter-governmental Commission on Human Rights (the AICHR) and supported by the ASEAN – US Progress.

Around thirty five journalists from all ten ASEAN Member States attended the five-days training programme in Eastin Grand Hotel, Bangkok which was organized by the Representative of Thailand to the ASEAN Inter-governmental Commission on Human Rights (the AICHR) and supported by the ASEAN – US Progress.

The AICHR crafted this TOT specifically for journalists to equip them with better understanding on human rights as well as to create a regional platform for ASEAN journalists to share experiences and best practices on the promotion and protection of human rights through their work.

In his welcoming remarks, Dr. Seree Nonthasoot, Representative of Thailand to the AICHR mentioned the significance of this year for ASEAN in general, with the launching of the ASEAN Community by the end of the year, as well as the formulation of ASEAN Vision 2025 and the new Community blueprints of each pillar of ASEAN, and for the AICHR in particular, with the leaving of majority of its Representatives.

The Training covered core areas of human rights such as rights of women, children, persons of disabilities, and the nexus between the environment, climate change and human rights.

On the last day of training the participants visited the Central Women Correctional Institution, the Thai PBS, and the Royal Thai Police Education Bureau. During the visit to the Central Women Correctional Institution, the participants were taken to a tour across the facility, where they could see firsthand the efforts of the Thai government to ensure the implementation of the Bangkok Rules which accord minimum treatment to female prisoners. The Bangkok Rules were the initiative of Thailand Princess, HRH Princess Bajrakitiyabha and the Thai Government. It was unanimously adopted by 193 countries during the 65th General Assembly session in December 2010 (UN General Assembly Resolution A/RES/65/229). The United Nations Rules for the Treatment of Women Prisoners and Non-custodial Measures for Women Offenders (known as the ‘Bangkok Rules’), protects the rights of female prisoners and offenders, explicitly addressing the different needs that women have and the different situations they come from, and it was the first instrument to address the needs of children in prison with their parents.

The participants encouraged the AICHR to conduct similar trainings and further advance trainings. ASEAN journalists would benefit from being informed with the knowledge of human rights, and of the vital role they play in the promotion and protection of human rights in the region.