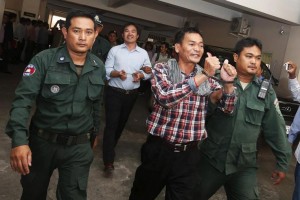 On 21 July, a three-judge panel at Phnom Penh Municipal Court sentenced 11 members of the Cambodia National Rescue Party (CNRP) to between seven and 20 years in prison on trumped up charges related to a 15 July 2014 protest in Phnom Penh’s Freedom Park, which ended in clashes between police and protesters.

“It was effectively a show trial that undermined all notions of the independence of the Cambodian judiciary,” said Charles Santiago, APHR Chairperson and a member of parliament in Malaysia.

“The trial proceedings were fundamentally flawed, lacking evidence against the defendants and adequate representation for them. The outcome seemed set from the beginning, demonstrating the extent to which the Cambodian courts are being used as political tools of the government.”

Only one of nine defense attorneys was present for closing arguments after the judges denied defendants’ requests for a delay until all lawyers could be present. The verdict came down in only 15 minutes following closing arguments.

“This case was decided without proper evidence or deliberation. It is clear that this kangaroo court is far from independent and has a long way to go before it can be said to be upholding the rule of law,” said Mu Sochua, a member of APHR and a Cambodian MP from the CNRP.

APHR said that the convictions, in combination with the Cambodian Senate’s approval of a highly controversial NGO law today following the National Assembly’s passage of the bill earlier in the month, represented disappointing developments for Cambodia and the region as a whole. Parliamentarians stressed the need to work harder to ensure the establishment of a sustainable “culture of dialogue” in Cambodia.

“It appears that the Cambodian government is more concerned with cracking down on political dissent than upholding internationally recognized standards for rights protections and the rule of law. That will continue to be a problem for the country—and the region—moving forward,” Charles Santiago added.