Home Statements Be like Leo! Stand with Indigenous Peoples and the Protection of the Environment! Revoke Philippine Mining Act of 1995, Pledge for the People’s Mining... 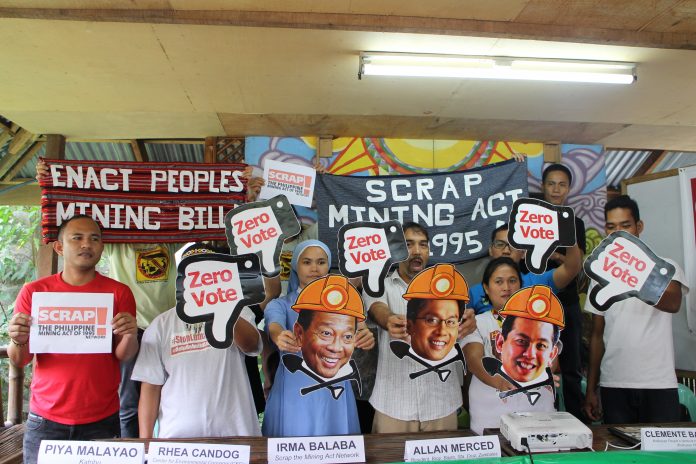 We challenge all the aspirants to pledge for the enactment of the people’s mining bill that embodies the Filipino people’s desire for a mining industry that upholds national sovereignty and patrimony, social justice, environment protection and people’s rights and welfare

“…we need to support leaders around the world who do not speak for the big holders and big corporations, but who speak for all of humanity, for the indigenous peoples of the world, for millions and billions of under privileged people who will be most affected by this, for our children’s children, and for those people out there who’s voices has been drowned out by the politics of greed…”
– Leonardo DiCaprio, Academy Awards Acceptance Speech, 28 February, 2016

Quezon City – On its 21st anniversary since enactment, representatives of protestant churches and Catholic institutions, along with indigenous peoples and environmental organizations under the Scrap Mining Act of 1995 Network, challenged the presidentiables and other national candidates to pledge their support in repealing Republic Act 7942 (Philippine Mining Act of 1995) and also challenged them to enact the People’s Mining Bill, a patriotic, pro-Indigenous Peoples, pro-environment mining bill.

“We call upon the presidentiables – Vice-President Jejomar Binay, Mayor Rodrigo Duterte, Senator Grace Poe, Former Secretary Mar Roxas and Senator Miriam Santiago; and all the senatorial and congressional candidates to heed the call of the Filipino people and pledge to the repeal of the Philippine Mining Act of 1995,” said Rev. Irma Balaba, a petitioner for the Scrap Mining Act prayer and representative from the National Council of Churches in the Philippines.

In June 2014 the Scrap Mining Act of 1995 Network launched its campaign to gather thousands of signatures for the then 20th anniversary of the despicable mining law. More than 18,000 signatures were gathered at the end of 2015, mainly from different initiatives in Manila and Quezon City.

“The 2016 National Elections should be a platform not just for flowery promises but to hear and act upon the people’s demands who are giving us constant warnings about economic sustainability and rampant destruction brought upon by wanton profiteering. We will be tireless in gathering even more signatures and petitions, now onwards from different provinces and even get widespread support from the international community and social media,” Rev. Balaba said.

The network shared that they will also submit these petitions to the new administration to remind them of their obligation to stand for the people, environment and the integrity of our patrimony, while continuing the defense in their local communities.

“There are 28 mining operations in our region by corporations such as Abacus and Benguet Mines, threatening our existence along with the intense military operations in our communities. We will persist in defending our land and life against the plunder and destruction of large-scale and destructive mining as we join the Scrap the Mining Act of 1995 Network to get the commitment of the candidates to repeal the anti-people, anti-environment law,” said Josephine Pagalan, a Manobo evacuee from Tandag City, and spokesperson of the KASALO lumad organization in Caraga.

“Yesterday, we heard the strong words of Mr. DiCaprio in the Academy Awards. It is very timely for us to reflect and respond to, especially after 21 years of plunder of our resources and destruction of our lands as facilitated by the Philippine Mining Act of 1995. We call on the candidates to take Leonardo DiCaprio’s position and act upon our concrete and legitimate demands,” said Bro. Ciriaco Santiago, III, a co-convener of the Scrap Mining Act of 1995 Network.

“We urgently call the national candidates to reject the liberalized, foreign controlled and export-oriented mining industry. We challenge all the aspirants to pledge for the enactment of the people’s mining bill that embodies the Filipino people’s desire for a mining industry that upholds national sovereignty and patrimony, social justice, environment protection and people’s rights and welfare,” the network collectively concluded. #