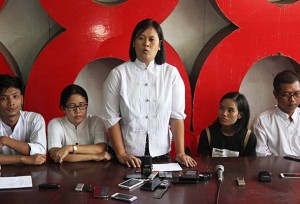 If the Human Rights Council makes compromises now and “discharges” Burma from the crucial Agenda Item 4, it would risk signaling that half measures of change are acceptable even before real progress on the human rights situation in the country is achieved without a concrete reform agenda.

As Burma prepares for the upcoming annual cross-examination by the UN Human Rights Council on 14 March, 2016, 121 civil society organizations wrote to member and observer states requesting them to maintain the country under Agenda Item 4 (“Human rights situations that require the Council’s attention”) and urged the extension of the Special Rapporteur mandate at this critical juncture in the country. The open letter comes just shortly after a chorus of similar calls made by regional and international human rights organizations ahead of the session where the UN Human Rights Council will adopt key decisions relating to Burma’s human rights record and performance. The concerns raised by the groups were amplified in recent days as the outgoing government intensified its rollback on rights with a spate of recent arrests and convictions of democracy as well as interfaith activists on spurious charges.

The 121 signatories cautioned the Human Rights Council against lowering its guard in the face of an increasingly dire human rights situation – including politically-motivated arrests through the deployment of repressive legislation, the intensification of internal armed conflict and escalation of forced displacements and the institutionalization of discrimination against religious minorities, among others – that has admittedly worsened in 2015 and continues to grow in intensity and scale, particularly in ethnic areas.

The Human Rights Council has been toying with the idea of adopting a less “punitive” approach towards Burma as early as 2011 when reforms first commenced and as recently as 2014 when the term of the previous Special Rapporteur, Tomas Ojea Quintana, had expired. Presently, even as the international community enthuses over the raft of reforms- accentuated by the recent nationwide ceasefire agreement (NCA) signing, Union Peace Conference and conduct of the General Elections- an enormous human rights challenge still belies the tenuous political transition in the country.

Just as the National League for Democracy (NLD) prepares to assume office and lead the country from 1 April, 2016, the outgoing administration and the Burma Army appear bent on making the transition as difficult as possible. On 24 February, 2016, prominent activist and woman human rights defender from the 88 Generation Peace and Open Society, Nilar Thein, was arrested for supporting the student protests against the controversial and undemocratic National Education law last year. She was charged under the notorious Article 18 of the Peaceful Assembly and Procession Act by Mayangone Township Court and is currently detained in Insein Prison awaiting trial on 7 March, 2016.

The willingness to “resurrect” old bogus cases, coupled with the hastiness at which the authorities issued the arrest warrant and declared her a fugitive, illustrates a complete breakdown of the rule of law and reveals the ulterior motivations for enacting and keeping repressive legislation on the books. Worryingly, such incidents are not isolated and show no sign of abating. Two other well known “88 Generation” activists and women human rights defenders, Mee Mee and Thet Thet Aung, have also been recently targeted for their activism in separate events from as long as two years ago.

Meanwhile, extreme religious-nationalist ideology continues to permeate and take root in the country. Spurred by their instrumental role and clout in the passage of the Race and Religion Protection laws, the “Ma Ba Tha” (also known as the Association for the Protection of Race and Religion) filed complaints against Muslim and Hindu interfaith activists, Ko Zaw Zaw Latt, Ma Pwint Phyu Latt, and Ko Zaw Win Bo, from the Thint Myat Lo Thu Myar group (Peace Seekers), for their advocacy efforts around the country to promote religious tolerance. They were found guilty of breaching section 13(1) of the Immigration Emergency Provisions Act (1947) and sentenced to two years in prison with hard labour, and are now facing an additional charge under Article 17(1) of the Unlawful Association Act (1908). It has notably been used to designate the members and activities of ethnic armed organizations, democratic opposition groups run by exiled dissidents and activists outside the country, and anyone deemed to be affiliated or in communication with these organizations, as illegal.

It is well established that President Thein Sein failed miserably to fulfill his pledge to release all political prisoners by 2013. Such arbitrary arrests on spurious charges highlight deep hostilities towards human rights defenders and democracy activists, and further expose the illusion of genuine change and reforms. The recent flurry of arrests and sentences demonstrate that an end to political prisoners is still elusive. Worryingly, it appears to be a calculated move by the outgoing Union Solidarity and Development Party (USDP) Government to create problems for the democratically elected successor and in the process, be in a position to discredit them. Despite the excitement the incoming NLD-led Government brings, impunity is still entrenched in institutions of political and military power as well as in key structures of governance. Clearly, the dominant narrative of a seamless democratic and political transition is at stark odds with the daily reality on the ground. Despite coming to the end of its term, the Government and Burma Army have employed increasing sophistication in their tactics of repression. The country is at the cusp of a potentially transformative moment, but a full democratic transition is yet to take place while rigid constitutional safeguards continue to impede democratic civilian oversight and ensure the Burma army remains impervious to change.

If the Human Rights Council makes compromises now and “discharges” Burma from the crucial Agenda Item 4, it would risk signaling that half measures of change are acceptable even before real progress on the human rights situation in the country is achieved without a concrete reform agenda. It is at precisely this time where heightened vigilance and support from the Human Rights Council and the Special Rapporteur on the human rights situation in Burma are needed to ensure that years of hard work are not derailed in the transition process. It is imperative that the member and observer states maintain the country under Item 4 and support a Council resolution on Burma in this upcoming session for a set of clear and concrete benchmarks that will act as a roadmap for the future of human rights in Burma to be established.