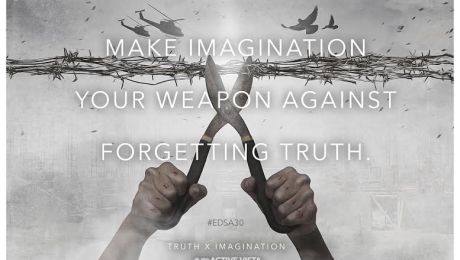 “The greatest enemy of history is time. Thirty years ago, the Filipinos through collective action succeeded in getting rid of a fascist dictator, marking the end of a dark era known for its grave abuses and human rights violations. Thirty years ago, that was the narrative. Is it still the same one told today?”

According to Dakila Executive Director, Leni Velasco, “The greatest enemy of history is time. Thirty years ago, the Filipinos through collective action succeeded in getting rid of a fascist dictator, marking the end of a dark era known for its grave abuses and human rights violations. Thirty years ago, that was the narrative. Is it still the same one told today?”

The film festival opened with the film EDSA XXX by renowned avant-garde filmmaker, KHAVN, last February 24, Wednesday, 6pm at the Cinema 4 of Shang Cineplex, Shangri-La Mall, Mandaluyong City. It was attended by prominent human rights defenders like Commission on Human Rights (CHR) Chairperson Chito Gascon, Secretary Ging Deles of the Office of the Presidential Adviser on the Peace Process (OPAPP); members of the different United Nation agencies led by United Nation Resident Coordinator in the Philippines, Mr. Ola Almgren; members of the diplomatic community, led by the Deputy Head of Mission of the Embassy of the Kingdom of the Netherlands, Mr. Jaco Beerends; artists, filmmakers and celebrities like Jun “Bayaw” Sabayton, Ronnie Lazaro, Lourd de Veyra, and Aljur Abrenica, star of the new historical epic, Hermano Puli.

According to its Festival Director Leni Velasco, “There is nothing more timely than opening this festival on the eve of the 30th Anniversary of the People Power Revolution in this month of love. EDSA, after all, was born out of love – love for freedom, for liberty, for country, for every fellow countrymen. We hope to spark and rekindle that same love again among the Filipino public especially among the youth by presenting these films that will disturb or inspire them to explore social truths.”

“Cinema is not there to be pleasant. It is there to stir, disturb, provoke, to punch the status quo instead of one’s time card, to stop the hiding behind sterilized, anesthetized, spineless art and calling it a fearless struggle for change. Cinema is a rupture and a revolt — a daily, hourly, minutely questioning of what’s right and wrong, good and bad, beautiful and ugly, until the profane becomes the sacred. The profane is the sacred”, Khavn, the director, in a statement said.  Most recently, Khavn made headlines by performing a 13-hour live piano film scoring. He set the record for the longest film concert as he unveiled his 13-hour autobiographical film “SIMULACRUM TREMENDUM” at the 45th International Film Festival Rotterdam.

Active Vista Festival Director, Leni Velasco, explained, “Who else can pull off 13 hours of live piano film scoring? No one else but Khavn, bringing the unimaginable to reality as always. EDSA XXX is the most fitting opening film for Active Vista not only because of the obvious but also more importantly because we want to shake the audience with a film that is both absurd and true. The power of cinema lies on its ability to mirror and hammer society and tap into our consciousness. And sometimes, it is in encountering the imaginary that social truths become amplified—this is ‘Truth X Imagination’. “

The Festival Opening marked the start of the yearlong program, which brings human rights themed films to schools and communities nationwide. Active Vista utilizes cinema first, as an educational platform to discuss and shed light on the importance of knowing and asserting human rights; and second, as a tool for empowerment and bringing about relevant social change.

For the second screening, Active Vista presented Jun Lana’s Barber’s Tales in partnership with the National Youth Commission, represented in the screening by Commissioner Dingdong Dantes. In a statement, Comm. Dingdong Dantes said, “This generation – our generation should learn from the patriotic sacrifice of each and every Filipino during that era, and embed the lessons of the People Power Revolution with our everyday lives. Because by doing so, we will be able to value, protect and be responsible of the democratic rights that we cherish today. Today, the responsibility of keeping the faith and fire alive is upon us, the responsibility of building our nation from the winds of change the EDSA Revolution lent us. We are often charged that we are entitled, convenience-seekers and unconcerned. If only to prove them wrong, today presents to us an occasion to hold on to the promises of the bright future because of EDSA.”

Festival Director Leni Velasco further added, “Active Vista deems that films like Barber’s Tales are essential viewing especially for the youth of today who only get an idea of Martial Law through dusty history books and documentaries—and now, more than ever, through social media. Amidst those who blur, twist, and rewrite history in favor of the oppressors, it is high time the youth are engaged into an enlightening discussion on the essence of human rights and the dangers of having them taken away. The freedoms and rights enjoyed today can only be truly appreciated if there is a full understanding of how they were fought for. It is through this that history will not be forgotten in time.”

The Active Vista shall screen Pepe Diokno’s Kapatiran tonight, February 26, at Shang Cineplex in partnership with the UN initiative, Re:PubliKo and on the 27th, Ara Chawdhury’s Miss Bulalacao, in Cebu. Pepe Diokno’s, Engkwentro, in Iloilo, and Chuck Gutierrez’s Iisa in Davao. Three internationally acclaimed foreign films, The Missing Picture by Rithy Panh, Citizenfour by Laura Poitras, and Margarita with a Straw by Shonali Bose, shall also be shown on February 27 at the UP Film Center.

“Street artist, JR, once said, ‘What we see changes who we are’. This Active Vista seeks to remind the public especially the younger generation who may not fully understand yet the importance of the EDSA Revolution that truth is both in the obvious and the obscure. The problem is that we, as a nation, have become afraid of the truth because it is a reflection of who we are and the society we built”, Velasco explained.  “But truth, no matter how ugly, no matter how difficult, needs to be seen. Because it is only in acknowledging truth that we are liberated and are empowered to transform it. This Active Vista hopes to be that undertaking – a platform to exorcise historical amnesia and usher this new generation into an understanding of the true essence of EDSA. The power of art is its ability to change perception, to change how people view the world. Active Vista inspires to do so through cinema, one viewer, at a time”, ended Velasco.

The festival also welcomed the solidarity of its international guests, Anna Har, Festival Director of the Freedom Film Festival in Malaysia, and celebrated New York-based literary writer, feminist and human rights activist, Ninotchka Rosca. In ending, Velasco said, “Active Vista call on all Filipinos – young and old, the passionate and the disheartened, the dreamers and the realists, – to make imagination your weapon against forgetting truth.”