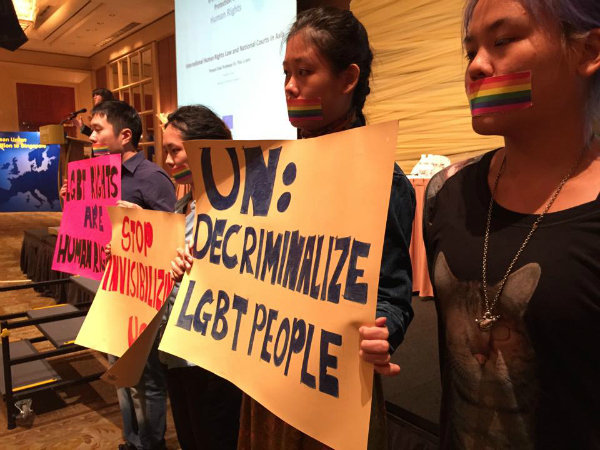 We call on the Myanmar government to repeal Section 377 of the archaic Penal Code that violates the right to privacy and freedom of expression as enshrined in the UDHR.

ASEAN Sexual Orientation, Gender Identity and Gender Expression (SOGIE) Caucus expresses serious concern over discriminatory acts undertaken by the government of Myanmar in the guise of rule of law.

We note with concern that the local government of Mandalay made plans to intensify the conduct of raids and arrests that specifically target gay and transgender persons found to have committed “indecent” behavior in public areas. In addition, we are bothered by recent pronouncements by Mandalay government officials about the need to detain gay and transgender persons in police stations where they will then be subjected to education.

In a publicized statement dated August 20, 2015, Mandalay Division’s Border and Security Affairs minister, Dr. Myint Kyu, considered the acts of gay and transgender persons as “inappropriate” and that “the existence of gay men who assume they are women is unacceptable and therefore we are constantly seeing actions to have the gays detained at police stations, educate them, then hand them back to their parents”.

The pronouncement of the Mandalay’s Minister Myint Kyu is gross and incites further acts of discrimination and violence against LGBTIQ persons. Moreover, it is a reflection of a prevailing homophobia and transphobia in the country.

Meanwhile, the Police Act of 1945, which grants broad and discretionary powers to police officers to protect order and safety in all public areas, have been used to target LGBTIQ persons. Section 35(c) entitled the police to arrest anyone “found between sunset and sunrise having his face covered or otherwise disguised, who is unable to give a satisfactory account himself… may be taken into custody by any police-officer without a warrant, and shall be punishable on conviction with imprisonment for a term which may extend to three months.”

Myanmar must uphold its obligations under the Universal Declaration of Human Rights (UDHR) to respect the rights of all persons to freedom from torture, cruel, inhuman and degrading treatment and punishment; the right to equality before the law and equal protection of the law; and the right to freedom from arbitrary arrest and detention; freedom of expression and the right to privacy. We note that Myanmar was one for the first set of countries that have adopted the UDHR.

We call on the Myanmar government to repeal Section 377 of the archaic Penal Code that violates the right to privacy and freedom of expression as enshrined in the UDHR.

We call on the Myanmar National Human Rights Commission to consistently and systematically monitor and document police abuses committed against LGBTIQ persons, and to provide effective remedies for LGBTIQ persons whose rights have been compromised.

We call on the leadership of the Myanmar Police Force to stop all forms of targeted arrests, detention, and cruel, inhuman and degrading treatment of LGBTIQ persons in contact with law enforcement officers. We urge the government to adopt and enforce guidelines and protocols to ensure that all members of the police force respect the rights and dignity of all persons regardless of SOGIE.

We believe that any enforcement of law aimed at ensuring public order and safety must not compromise fundamental human rights and freedoms enshrined in international human rights instruments.