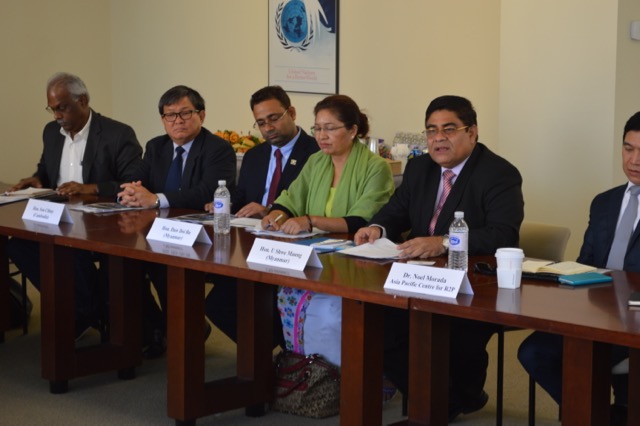 With elections less than two months away, Myanmar stands at a critical moment in its political transition. But without deliberate steps to address core human rights concerns, including support from the international community, the country risks veering from a path toward democracy, ASEAN Parliamentarians for Human Rights (APHR) said today.

NEW YORK – With elections less than two months away, Myanmar stands at a critical moment in its political transition. But without deliberate steps to address core human rights concerns, including support from the international community, the country risks veering from a path toward democracy, ASEAN Parliamentarians for Human Rights (APHR) said today.

On the sidelines of the United Nations General Assembly, the collective of Southeast Asian parliamentarians urged the international community to support Myanmar in addressing a number of issues that threaten to undermine upcoming elections and the country’s democratic future.

“Elections have the potential to be transformational. But we are deeply concerned about recent government decisions, which undermine the credibility of the contest,” said APHR Chairperson Charles Santiago, a member of parliament from Malaysia.

Among those decisions is the rejection of dozens of Muslim candidates for parliament, including sitting MP U Shwe Maung, who is in New York, along with other APHR members, to address representatives from UN agencies and missions.

“I wish I could say I was an exception. But the truth is that Rohingya, along with other Muslims in Myanmar, are totally alienated and excluded from participation in politics. And make no mistake: it is because of our ethnicity and religion,” Shwe Maung said.

“In any other country the rejection of an entire class of candidates would render the contest itself undemocratic. Yet some in the international community seem to view this as simply a minor bump in the road,” Santiago added.

“The international community, including the United Nations, must call out the Myanmar government and urge the Union Election Commission in Myanmar to reverse this deeply problematic decision.”

Several APHR MPs speaking in New York recently returned from a fact-finding mission to Myanmar. From 31 August to 4 September, the APHR delegation met with a variety of stakeholders to discuss key political and human rights issues facing the country. The delegation, which included parliamentarians from Cambodia, Indonesia, and Malaysia, visited Yangon, Kachin State, and Rakhine State, and learned about election preparations, concerns facing ethnic and religious minorities, and the broader climate for human rights.

At the UN headquarters in New York today, APHR released its end of mission statement, which provides an assessment of the political and human rights situation in the country in advance of elections this November.

“Overall, a lack of trust in the electoral process, particularly among ethnic minority populations, threatens to damage both the legitimacy of the vote and that of the next government,” the statement warned.

Among the issues MPs examined was the current situation in Rakhine State, including the persecution of Rohingya. In a report released in April, APHR warned of the risk of atrocities against Rohingya and called on ASEAN to take action to prevent them. APHR’s end of mission statement released today highlighted the concerning lack of action on this front since then, and warned of regional implications should the Myanmar government and ASEAN fail to act.

“Another regional migrant crisis looms if nothing is done to address the dire situation on the ground for Rohingya and other Muslims in Rakhine State and the political crisis that contributes to these conditions and promotes feelings of despair and hopelessness among affected populations,” the statement said.

APHR also noted concerning limitations on basic freedoms, including recently passed legislation that restricts the rights of women and religious minorities. Parliamentarians called on the Myanmar government to do more to ensure basic human rights, including freedom expression and assembly and freedom of religion and belief.

“We reiterate that a democratic Myanmar, where human rights are respected and protected and all people are treated fairly and equally under the law regardless of ethnicity, religion, or gender, is pivotal to the development of a mutually beneficial and truly people-centered ASEAN community,” the statement concluded.

Read the full end of mission statement or download a PDF version.