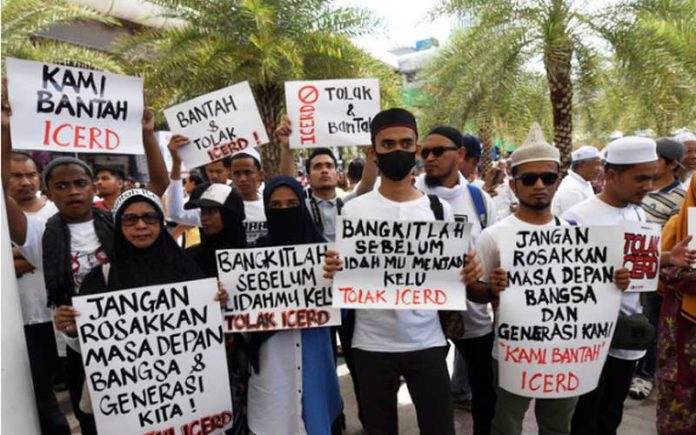 The main contention by Umno-PAS in relation to the ICERD can be categorised into three areas:

In addition, the government along with another 170 countries, also endorsed human rights at the World Conference against Racism in Durban, South Africa in 2001.

In 2012, the previous government signed and endorsed the Asean Human Rights Declaration (AHRD) with a pledge and commitment to the UDHR, the United Nations Charter, the Vienna Declaration and Programme of Action, and other international human rights instruments.

All of the above was done without much fuss. But when the present government attempts to enhance the country’s human rights standing by endorsing ICERD with reservations, those fears that appeared obsolete now seem to resurface for obvious reasons that feed the Umno-PAS regime.

Yes, I forgot about the United Nations Declaration on the Rights of Indigenous People of which Malaysia is also a signatory. Although it was signed in 2007, little was done for them during the previous government’s administration. So Umno-PAS, please spare the indigenous groups from your obsolete arguments.

The arguments put forward by Umno-PAS to protect race and religion are futile and are only to protect their own self-interest and importance.

My advice to the government? Just get on with it and sign the ICERD for a start with the necessary reservations.

Azlina Harun is an FMT reader.

The views expressed are those of the author and do not necessarily reflect those of FMT.