Home News Do the bells toll for Rohingyas? 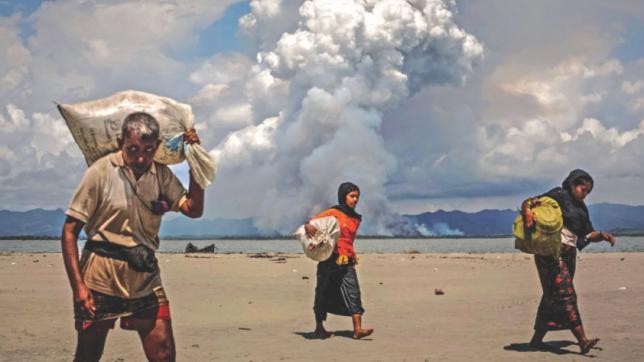 Smoke is seen billowing on the Myanmar border as Rohingya refugees walk on the shore after crossing the Bangladesh-Myanmar border by boat through the Bay of Bengal, in Shah Porir Dwip. PHOTO: REUTERS

Mid-November has arrived and insecurity and uncertainty have descended over Rohingya refugees in Ukhia and Teknaf. The impending deadline has also elicited expressions of deep concern from UN independent experts and rights organisations.

The failure of the Burmese authorities to create an enabling condition for the refugees to return is the foremost factor behind the call for a halt to any repatriation at this stage. No meaningful change has occurred in the Burmese state’s policy towards the Rohingya people. The demand for restoration of citizenship rights has gone unheeded; Rohingyas are still not recognised as a national ethnic group; the discriminatory legal and administrative apparatuses that were set up over the decades creating an apartheid-like situation remain intact; their land and properties remain confiscated by the state or have been given away to Buddhist Rakhines; those who committed heinous crimes against the Rohingyas continue to remain in command positions and enjoy absolute impunity; escorted by the law enforcement agencies, the ultra-nationalist Buddhist vigilantes still dominate the streets of Maungdaw, Buthidaung and Rathedaung; Rohingyas in internally displaced camps continue to perish slowly for lack of food, potable water, medicine and livelihood opportunities; and the Kofi Annan recommendations, the much-celebrated and cited panacea for Rohingya salvation, continue to gather dust.

It is no surprise that the news of impending repatriation has hit the Rohingya community in Bangladesh hard. The assurances of the Bangladesh government that no one will be forced to return against their wish and that the UN refugee agency will be engaged in ascertaining the voluntariness of returnees have done little to assuage the concerns of these traumatised people. A Reuters report (November 9, 2018) documents the reaction of 20 of the 2,000 Rohingyas whose names have appeared in the first list for repatriation. Abdur Rahim, 47, who owned two acres of land in Arakan, emphatically says: “I’ll just consume poison if I am forced to go back,” and goes on to demand, “What is the guarantee that we will not be persecuted again?” His apprehension resonates in the statement of Nur Kaida, 25. She says it “would be better to die in the camps rather than go back and get killed or raped.”

Last week dozens of Rohingyas were apprehended by the Bangladesh Coast Guards while attempting to go to Malaysia through the maritime route. For some the dangerous sea route would be worth the risk to avert repatriation to the killing fields of Arakan. Mohammad Wares, 75, one of those whose name appeared in the list, asserts it is better than going back. “Why are they sending us back?” he asks. Poignantly, he proposes, “They may as well throw us into the sea.”

Instead of creating a congenial condition for Rohingyas’ return, on November 8, the Director General of Asean Affairs of Burma’s foreign ministry claimed that 54 of 6,472 Rohingyas on a list provided by Bangladesh authorities had been identified as having been involved in “terrorism”. He did not specify the type, timing or location of the alleged terrorist activities. The DG further noted that his country sent a list of terrorists to Bangladesh with a request to take action against them. If they are sent back, they would “have to take action against them according to the law,” he said. Thus it is clear, on the one hand, that Burma is presenting to the world that it is serious about taking back the Rohingyas, while on the other, it has not only failed to create the minimum conditions for Rohingyas’ return but is engaged in subterfuges to undermine any meaningful repatriation.

Instead of promoting inter-communal harmony to facilitate refugees’ return, the Burmese government has been engaged in a relentless campaign to present Rohingyas as terrorists. On October 26, Thayninga Institute for Strategic Studies, a pro-military think tank in Yangon, hosted a seminar that was attended by Rick Heizman, a controversial American activist whose anti-Muslim views have made him popular with the Burmese nationalists. Earlier in September, Burma’s Ministry of Foreign Affairs sent United Nations agencies and at least one foreign aid group web links to a recent film by Heizman that claims Rakhine State is the target of an Islamic plot to destroy Buddhism.

In shoring up the Burmese government’s implicit agenda to deny Rohingyas their rightful claims in Arakan, on November 4, in Akyab, the capital of Burma’s western state of Arakan, Buddhist protesters held a rally opposing repatriation of the Rohingyas and the latter’s claim to residence in the state. Earlier on October 14, the military-backed Buddhist monk Wirathu at a rally in Yangon attacked Rohingyas as “terrorists” and declared that he would take up arms to oppose any UN or international “interference”. Last week leaders of Arakan National Party (ANP), the dominant political party of ethnic Rakhines, informed visiting US diplomats that returning Rohingya refugees will not be placed in the northern Maungdaw district region, their ancestral land. “This proposal was approved by the Rakhine state parliament as well,” said the secretary of ANP.

The duplicity of the Burmese regime is also obvious in the case involving seven Rohingyas who were deported by India in early October. The Indian Supreme Court refused to intervene in the matter after it was convinced by the Indian central government that Burma had accepted the refugees as citizens and had agreed to take them back. However, the men were denied citizenship and the Burmese government compelled them to accept national verification cards. Thus, there is little reason to believe that Burma would treat the Rohingyas who return from Bangladesh any differently under present conditions.

Independent experts have also counselled against any repatriation at this stage. On October 24 at the Security Council, Marzuki Darusman, chair of the UN Independent International Fact Finding Mission on Burma, described the persecution and the killing of Rohingyas as “slow burning genocide” as well as “ongoing genocide”. Another independent UN human rights expert, special rapporteur on the situation of human rights in Burma Yanghee Lee, on November 6 urged a halt to the “rushed plans” to repatriate Rohingya refugees on grounds of a lack of guarantee that the refugees wouldn’t face persecution if they returned home.

It is under such dismal conditions that on November 9, 42 humanitarian and civil society agencies working in Arakan and in Rohingya refugee camps in Bangladesh expressed their anxiety about the prospect of any repatriation efforts at this stage. They assert that facilitating repatriation would be premature in conditions where refugees continue to flee Burma and note that refugees’ return to conditions of confinement with no freedom of movement or access to services and livelihood is likely to be permanent. The last thing the refugees want is to live in a situation of 128,000 of fellow Rohingyas and other Muslims who have been incarcerated in central Arakan state over the last six years.

Reports inform that both Bangladesh and Burma were exhorted to begin the repatriation process by some powerful states of the region who have significant interests in shielding the Burmese regime from mounting international criticism of committing mass atrocities, including crimes against humanity and genocide. A token repatriation of a few thousand Rohingyas would be a convenient excuse for them to claim that the bilateral solution is gaining traction and thus there is little role for the international community in the Rohingya affair. Surely, the scenario merits prudent consideration.

While the commitment of the international community in addressing the root cause of Rohingyas’ plight has been severely wanting, Bangladesh stands tall by extending its continued support to the refugees. The prime ministerial pledge to this effort has been consistent and unequivocal. As a follow-up to her 2017 statement to the UN General Assembly session, in which Prime Minister Sheikh Hasina called for the creation of a “safe zone”, in 2018 she publicly affirmed her country’s commitment not to return Rohingya refugees to Burma until the conditions are conducive including “guaranteeing protection, rights, and a pathway to citizenship for all Rohingyas” (statement at the UN General Assembly on September 25, 2018). There is compelling evidence to argue such conditions do not exist now.

CR Abrar teaches international relations at the University of Dhaka.

SOURCE Do the bells toll for Rohingyas?