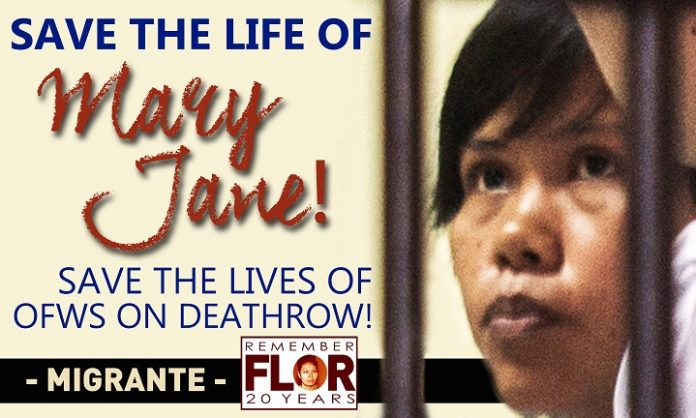 Veloso was a victim of large-scale international drug syndicates, of circumstance and of government neglect. The series of unjust executions of Filipinos on death row should be put to a stop.

Mary Jane Veloso is a 30-year-old Filipina mother-of-two sentenced to death by the Indonesian Supreme Court in April 2010 for drug trafficking.

Veloso’s case was submitted for judicial review but her appeal was rejected by the Indonesian Supreme Court last March 26, 2014. News reports state that Indonesia is preparing to transfer Veloso from the city of Yogyakarta to the maximum security prison in Nusakambangan Island of Central Java to await execution by firing squad.

When she arrived in Kuala Lumpur, the same person told her that the job was not available anymore and that she would instead be transferred to Indonesia. It was there that she found out that she was tricked into carrying luggage containing 2.6 kilos of heroin.

The Indonesian government plans to execute 10 convicted foreign drug traffickers, including Veloso, all at once. Their cases have drawn international flak for Indonesian Pres. Joko Widodo after he rejected pleas by the United Nations and various governments for their clemency.

UN Special Rapporteur Christof Heyns on extrajudicial executions had also appealed to Wododo to stop the executions on the basis that the Office of the UN High Commissioner for Human Rights reported information that suggests that Veloso and her 14 other fellow accused were convicted after unfair trials. The same report attested that all of them did not receive sufficient legal services or the right to translators, and had no legal representation at all stages of their trials.

Upon her arrest at the Jogjakarta airport, Veloso was not provided proper legal assistance. She was only provided a student translator during the course of her trial. She did not understand any of the proceedings.

Veloso’s case is yet another case of the Philippine government doing a little, too late. She was arrested in 2010 and was not assigned a lawyer until the last minute. Had it not been for the international criticism that accompanied her fellow foreign inmates’ cases, it can be argued that the Philippine government would have once again opted to keep her case hush to evade public censure. Such had been the Philippine government’s tact, it had so far failed to show transparency or accountability for failing to save the lives of Filipinos on death row.

Should Veloso’s execution push through, she would be the eighth Filipino executed under the present leadership of Benigno Aquino III, the most number of executions of Filipinos on death row under one regime since the Philippine labor export policy was implemented in the 1970s.

Veloso was a victim of large-scale international drug syndicates, of circumstance and of government neglect. The series of unjust executions of Filipinos on death row should be put to a stop.

Please send a copy of your email/mail/fax to the above-named government officials, to our address below:

Sign the petition calling on Pres. Widodo to stop the executions in Indonesia:
http://www.amnesty.org.au/action/action/36419/ [1]

Like and circulate to all networks the Save the Life of Mary Jane Veloso Facebook page:
www.fb.com/SaveMJVeloso [2]