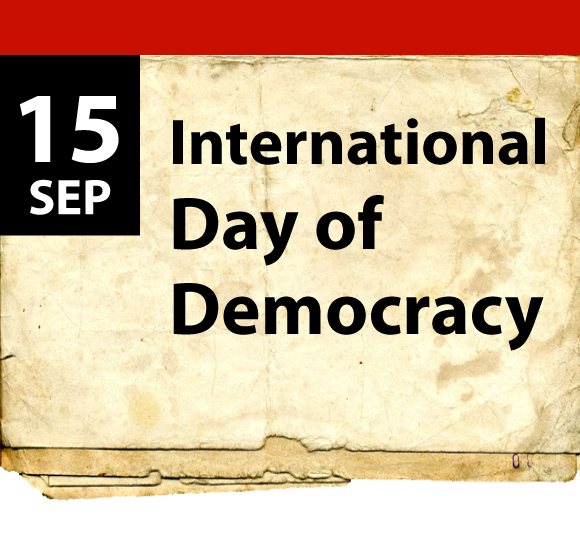 On International Day of Democracy 2015, we call on States to recognize that civil society space is the vehicle that allows this to happen. Indeed, it is essential for a true democracy.

GENEVA (11 September 2015) – Speaking ahead of the International Day of Democracy, the Independent Expert on the promotion of a democratic and equitable international order, Alfred de Zayas, and the Special Rapporteur on the rights to freedom of peaceful assembly and of association, Maina Kiai, deplore the increasing erosion of democracy as a result of repressive policies in some countries, but also by virtue of the increasing influence of vested interests at the expense of the public will.

This year’s theme for the International Day of Democracy is space for civil society. The United Nations and all Special Procedures mandate holders endorse this necessary and achievable goal.

But democracy today has become an over-used word, invoked even by tyrants. A country does not become democratic simply by holding elections.

What matters most is what happens between those elections: Can people speak out, engage and influence the leaders they have elected? Is there a correlation between the needs and will of the people and the policies that affect them? Can people peacefully assemble when other ways of expressing their grievances fail? Is peaceful dissent tolerated and encouraged to flourish, so that the marketplace of ideas is not monopolized by one group?

On International Day of Democracy 2015, we call on States to recognize that civil society space is the vehicle that allows this to happen. Indeed, it is essential for a true democracy.

Unfortunately, space for civil society is shrinking rapidly today, both in countries with no democratic tradition and in ostensibly democratic countries. There is a growing disconnect between elected officials and the people. We see this disconnect manifested in the recent surge of large protest movements throughout the world. People perceive a failure of governance and democracy, and protest is often their last resort in making themselves heard. Increasingly, governments are responding to this type of dissent with more repression, distorting the concept of democracy beyond recognition.

Meanwhile, we are also witnessing a worrisome erosion of democracy as a result of the increasing influence being exercised by powerful actors that have no democratic legitimacy, including the military-industrial complex, transnational corporations, financial institutions, investors, big pharma and the oil-and mining lobbies. Democratic governance is being corrupted by players that are not subject to democratic controls and who use their largesse to ensure that their interests are prioritized over those of the general public.

Civil society must reclaim its rightful place by demanding genuine participation in governance, including decisions on peace initiatives, environmental protection and trade and investment agreements. “Fast-tracking” legislation or treaties, enacted without consulting stakeholders and without responsible debate is unacceptable in a democracy.

Democracy is much more than a label. ‘Representative democracy’ can only be called democratic when and if ‘representatives’ actually represent their constituencies by pro-actively consulting with them and facilitating their participation in decision-making, thus making the goal of greater space for civil society meaningful.

Democracy should not be reduced to an empty word; it is self-determination in action, and a necessary instrument for securing a more peaceful, just and stable world. Civil society is a key partner to achieve this noble goal.

We therefore call upon Member States to ensure greater space for civil society, so that they may take their rightful place as key players in democracy.

Alfred de Zayas (United States of America) was appointed as the first Independent Expert on the promotion of a democratic and equitable international order by the Human Rights Council, effective May 2012. He is currently professor of international law at the Geneva School of Diplomacy. Mr. de Zayas practiced corporate law and family law in New York and Florida.

The Independent Experts are part of what is known as the Special Procedures of the Human Rights Council. Special Procedures, the largest body of independent experts in the UN Human Rights system, is the general name of the Council’s independent fact-finding and monitoring mechanisms that address either specific country situations or thematic issues in all parts of the world. Special Procedures’ experts work on a voluntary basis; they are not UN staff and do not receive a salary for their work. They are independent from any government or organization and serve in their individual capacity.