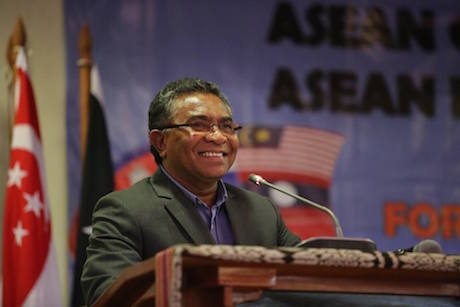 DILI, 03 August 2016 – With the official opening of the ACSC/APF 2016, there has been a resounding call for greater solidarity among ASEAN civil society, as well as for heightened collaboration between civil society and government.

These themes have been embodied both in the consensus to hold the ACSC/APF 2016 in Timor-Leste, as well as by the presence of the Prime Minister of the Republic of Timor-Leste, H.E. dr. Mr. Rui Maria Araujo, at the opening ceremony. This was unprecedented—as it is the first time the head-of-state of an ASEAN nation has participated and engaged in an open dialogue with citizens—and must serve as an example to the ASEAN governments.

In his address to ACSC/APF 2016 participants this morning at the Dili Convention Center, Prime Minister Araujo illustrated the potential of a collaborative relationship between government and civil society using the example of Timor-Leste. Prime Minister Araujo stated, “The relationship between government and civil society in Timor-Leste is constructed upon the genuine conviction that civil society is an important partner during the process of nation-building in countries like ours where almost everything—from policy development, to implementation, to monitoring of results—have to be built from scratch, and have important implications in the day-to-day lives of people who struggled during 500 years of foreign domination.”

Prime Minister Araujo’s sentiments around increased collaboration were shared by the ASEAN Parliamentarians who participated in Tuesday’s Town Hall, as well as by President Taur Matan Ruak, whose address was delivered by a representative during the welcome cocktail reception hosted at the President’s Palace on Tuesday night.
The dialogue with ASEAN Parliamentarians highlighted the need for increased education among members of government on the treaties and underlying obligations of the human rights conventions to which their countries have acceded, and the Parliamentarians called on civil society, as the on-the-ground experts, to continue to guide government’s agenda and priorities.

President Taur Matan Ruak’s words also underscored the need for a less adversarial and more collaborative relationship between government and civil society, stating ‘we should not be afraid to be in the same room together,’ and attributing some successful measures Timor-Leste has taken towards recognising human rights to the initiatives of civil society.

Members of ASEAN civil society are cautiously optimistic about the collaboration with government, emphasising that this collaboration only makes sense if it is substantive and addresses the most painful issues of the region, such as the shrinking space for civil society and persecution of dissenting voices.

The ACSC/APF 2016 Conference is taking place on 02-05 August 2016, at the Dili Convention Center in Timor-Leste. The full programme of the ACSC/APF 2016 can be viewed at aseanpeople.org.