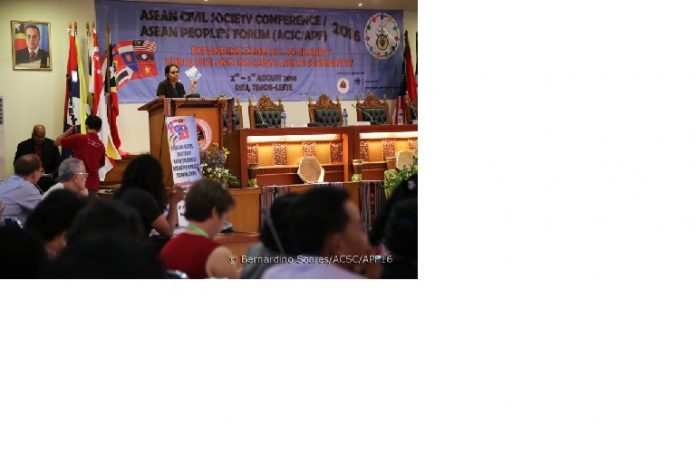 Once again, greater solidarity among ASEAN civil societies to unite with a common voice against oppression, regardless of which country the offense is taking place in, was emphasised as a way forward

Dili, Timor-Leste – 04-08-2016- Among the foremost concerns of civil society being prioritised at this year’s ASEAN People’s Forum is the issue of encroachment. This encroachment is being seen throughout the region, both in the form of shrinking civic spaces, as well as physical encroachment on land and maritime rights.

During yesterday’s sessions, representatives of organisations from Timor-Leste, Indonesia, and Vietnam respectively discussed the issues faced by their communities with regard to resource exploitation by Australia, encroachment on the rights of traditional fisherman via government regulations, and China’s strong-arming of ASEAN countries in the South China Sea.

“A good response to this issue is to build more people-to-people solidarity, especially between and among peoples of the contending or claiming countries, such as Australia, Timor-Leste, the Philippines, China, and the like,” stated Mr. Augusto (Gus) Miclat Jr., Executive Director of the Initiatives for International Dialogue (IID), based in the Phillipines.

Mr. Mark Batac, also representing IID as well as the Global Partnership for Prevention of Armed Conflict, heeded that we must further remember that, “Fighting encroachment is not a competition between the people of China and the people of ASEAN, or the people of Timor-Leste and the people of Australia. While we celebrate our sovereignty as peoples, we should also be weary not to flame any conflicts between our peoples. We as the people’s movement in civil society must build bridges, not boundaries.”

Encroachment in the form of shrinking civil space also continues to plague ASEAN civil society. Mr. Andrew Khoo of the Malaysian Bar Council discussed how governments across ASEAN use means such as national security, censorship, and regulation to justify its encroachment on the rights of citizens.

Ms. Chalida Tajaroensuk of People’s Empowerment Foundation, Thailand, illustrated how these tools of oppression are used in Thailand, stating, “The justification behind the 2014 military coup was to ‘keep peace and order,’ and now Article 44 of the current version of the Constitution is being used under this guise to concentrate power with the government. They use Article 44 to justify the violation of rights, from land-grabbing to dragging human rights defenders into military court.”

Similarly, Mr. Victor Mambor of the Independent Alliance of Journalists (AJI Papua) discussed the repression that is taking place through silencing in West Papua, with police ‘categorising victims as terrorists and separatists, and arresting or killing them on these grounds.’ Mr. Mambor also shed light on the government’s tactic of preventing international media or NGOs from entering the country, further silencing any discussion of problematic issues.

Once again, greater solidarity among ASEAN civil societies to unite with a common voice against oppression, regardless of which country the offense is taking place in, was emphasised as a way forward. This further underscores the importance of the ACSC/APF forum in bringing representatives of ASEAN civil society together for open dialogue to discuss strategies and solutions in a safe space.