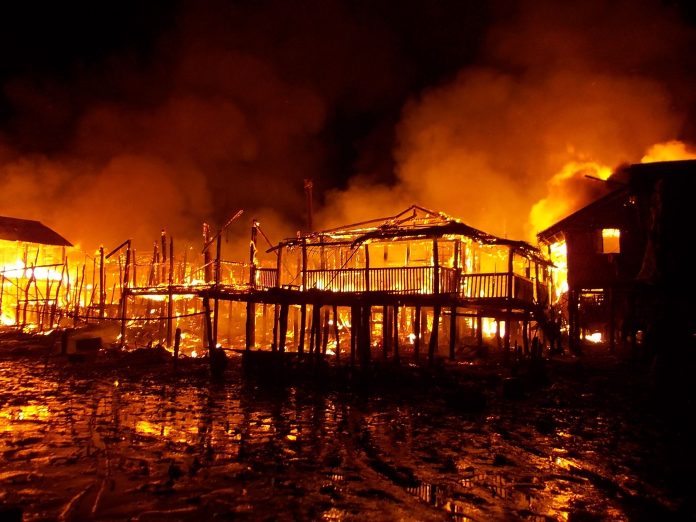 At home, we strongly saying that it is the responsibility to the government of Myanmar to stop the discrimination and human rights violations against the Rohingya ethnic, nor this incident would keep spread out and possibly would lead to the act of genocide.

The Commission for the Disappeared and Victims of Violence (KontraS) – condem the attacks on the Rohingya ethnic villages. The series of incidents occurred in between November 10-18, 2016. According to international community network observation and data, there were approximately 820 structures destroyed in five different villages, including Maungdaw district, 255 were in the village of Yae Khat Chaung Gwa Son, 265 in Dar Gyi Zar, 65 in Pwint Hpyu Chaung, 15 in Myaw Taung and 220 in Wa Peik. It shows that the new government of Myanmar that should be as a new hope for the people has already failed to ease tensions and promote stability in Rakhine State.

The Government of Myanmar that already stated the attack and illegitimate of state securitisation were caused by the provocation of bad people while some of them were attacking the police outpost. It is actually a very irresponsible statement, which the government has a responsibility to look further of the cause on the attack against the police, not by immediately attacking them and raided the villages and using excessive power against the ethnic.

The former UN Secretary General, Kofi Annan, as the United Nations’ rights agency has quoted, stated that the Rohingya ethnic maybe the victims of crimes against humanity after he visited several conflict zones included Rakhine State within the country. In the latest incidents, it was widely known that the military of Myanmar has carried out a bloody crackdown in the western state and thousands of the Muslim minority have flooded over the border into Bangladesh. Based on previous gestures that have been made by the Government of Myanmar, has always responded with conservative blanket denials for every human rights violation allegation that mostly involving the Myanmar’s security forces. The gesture has been verifying, when the Indonesian journalist interviewed the Myanmar Ambassador to Indonesia –His Execellency Aung Htoo. He strongly stated that the army is hunting “terrorists” behind raids on the police posts last month.

The jargon of to tackle the “terrorists” has justifying the rampant practices of rape, extrajudicial killing, arbitrary arrests, tortures and other human rights violations already paying a lot of attention from across the world in the cruelty of the state junta military apparatus against the Rohingya ethnic for decades. Myanmar has appeared extremely infrequently on the Security Council’s agenda. Albeit the various UN mechanisms (ranging UN Security Council, UN Human Rights Committee, UN Special Rapporteur on the Situation of Human Rights in Myanmar) continue to express their deep concern over malicious treatment toward the Rohingya. Despite the regional organization including ASEAN have roles to immediately conduct humanitarian aid towards the Rohingya ethnic, there is no concrete and consolidify action that can be taken to prevent more crimes against this minority ones.

At home, we strongly saying that it is the responsibility to the government of Myanmar to stop the discrimination and human rights violations against the Rohingya ethnic, nor this incident would keep spread out and possibly would lead to the act of genocide. Moreover, according to the framework of Responsibility to Protect (R2P), issued by the Secretary General of the United Nations, pillar one states that the government should bears the primary responsibility to protect their population from genocide, war crimes, crimes against humanity and ethnic cleansing. This is clearly showing the mandate of the state to prevent this kind of excessive use of power action that unfortunately appeared for decades in Myanmar.

Therefore, the Gorvernment of Myanmar shall immediately allow the humanitarian access towards the victims of human rights violations against the Rohingya ethnic to assess the needs of the ethnic that has been reported by the international community such as CSOs, UN Special Rapporteur and others. The Government of Myanmar also should immediately pull out all the excessive numbers of security appararus in the Northern Rakhine state against the Rohingya ethnic to prevent more human rights violations and minimize the growing numbers of victims and to ensure the right of the victims and protection towards the vulnerable groups such as women and children because of the incident.

The Government of Myanmar has already received various recommendations by the UN Security Council, UN Special Rapporteurs and other international community to immediately resolve the case of crime against humanity against Rohingya ethnic. Especially, to immediately conduct the responsibility to protect according to the concept by the UN Security Council towards the Rohingya ethnic. The resolution by the United Nations General Assembly (UNGA) still needed. The UN Special Advisory lead by Kofi Annan to Rohingya crisis shall make more firm action towards the Government of Myanmar that already failed to conduct responsibility to protect and gain more international solidarity in the UN member-states to urge Myanmar to immediately resolve the crimes against humanity against Rohingya ethnic. Thus, Government of Myanmar shall immediately conduct humanitarian action to respect, protect and fulfill human rights for the Rohingya ethinc and prevent same case in the future.