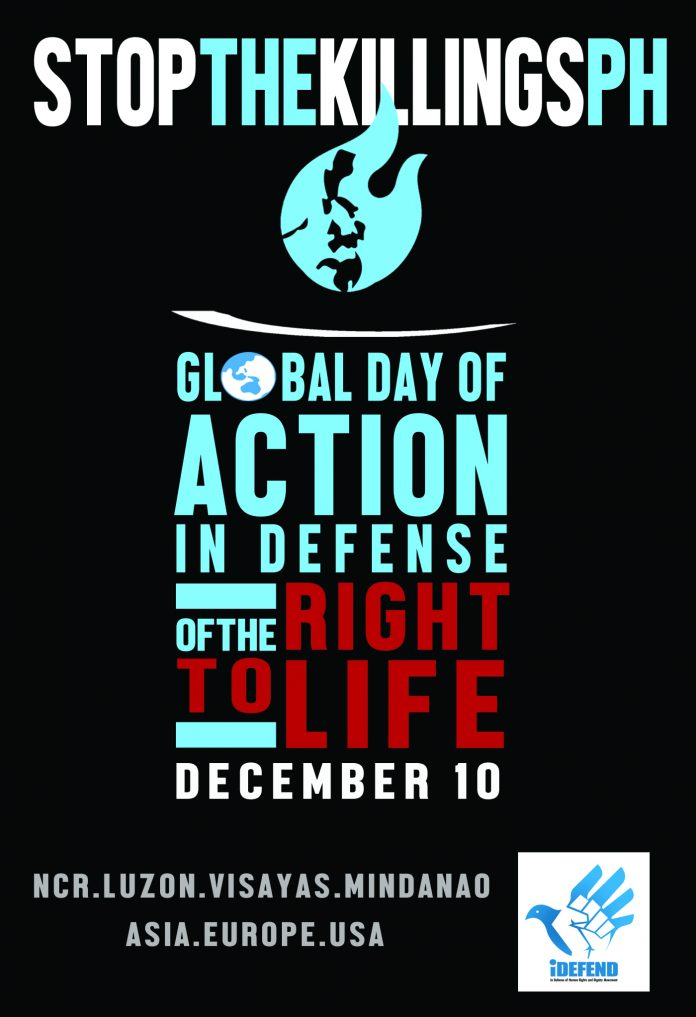 iDEFEND strongly condemns the revision of history, the blatant treachery against the Filipino people with no regard for the victims of Martial Law by allowing the burial of the late dictator Ferdinand Marcos at the Libingan ng mga Bayani (LNMB).

CAMPAIGN ADVISORY
In response to President Rodrigo Duterte’s blatant attack on human rights, continuing and rampant killings, railroading of death bills (bills to restore death penalty and lowering of the age of criminal liability), ordering the Marcos Burial in LNMB, sexist attack on women, while failing to fulfill campaign promises like end of ENDO, genuine FOI and the lack of decisive programs to end poverty etc. iDEFEND (In Defense of Human Rights and Dignity Movement) enjoins all human rights defenders and the public, including Filipinos and solidarity groups in different countries to unite and creatively protest against the rampant killings and violent governance of Duterte while failing to fulfill campaign promises on economic and social wellbeing of the Filipinos to a Global campaign to defend the RIGHT TO LIFE in the Philippines.

On December 10, 2016 (International Human Rights Day 2016) Global Day of Action in Defense of the Right to Life, iDEFEND calls on our people to strongly oppose the resurgence of authoritarian rule even as it feels like martial law is already here, as evidenced by now almost 6,000 victims of extrajudicial killings. We can only continue our work for human rights and sustainable development if our freedoms to express, report, organize, assemble and conduct public actions are preserved, and our civil liberties are guaranteed.

OUR MESSAGE:
OUR ALTERNATIVE IS HUMAN RIGHTS. iDEFEND has always asserted the need for a human rights based governance system that addresses the root cause of criminality, and guarantees a sustainable and people centered development. We push for a harm reduction strategy in the approach to the drugs issue: institutionalizing a public health framework, a complete halt to the targeting and killing of suspected drug users, and rule-based law enforcement procedures in apprehending drug traders.

iDEFEND supports the implementation of an economic agenda based on social justice: an end to contractual labor, land conversions, demolitions, internal displacement, and militarization. The defense of the right to life refers to the protection of both the physical integrity as well as the ability of a person to lead a life of dignity. The right to life requires the absence of fear for our lives and our loved ones; the right to life requires job security, land security, housing rights, a sustainable environment, long-term economic opportunities, a justice system that works, and access to health care and education for all.

iDEFEND strongly condemns the revision of history, the blatant treachery against the Filipino people with no regard for the victims of Martial Law by allowing the burial of the late dictator Ferdinand Marcos at the Libingan ng mga Bayani (LNMB).

We encourage concern Filipinos, HRDs and solidarity movements and groups from all over the world to join this action by:
1.    Holding creative protest actions, events and activities wherever you are (Philippine embassies, freedom parks, offices, at home).
2.    Change profile picture and cover photos of your social media accounts. (see attached)
3.    Our general calls: KARAPATAN HINDI KARAHASAN!, STOP THE KILLINGS!, KABUHAYAN HINDI PATAYAN! NEVER AGAIN TO MARTIAL LAW, NEVER AGAIN TO THE MARCOSES!
4.    Upload photos of your action online and use the hashtags #KarapatanHindiPatayan #StopTheKillingsPH #HumanRightsDay2016
5.    Pls wear black

In Defense of Human Rights and Dignity (iDEFEND) is a grassroots movement that defends the rights and upholds the dignity of all Filipinos. It engages with the government, educate and organize the public and transform collective voices into public action. iDEFEND works towards the realization of a rights-based governance that is anchored on respect for due process and rule of law.

Please message us and send details of your December 10 action for close coordination, announcement and media projection.