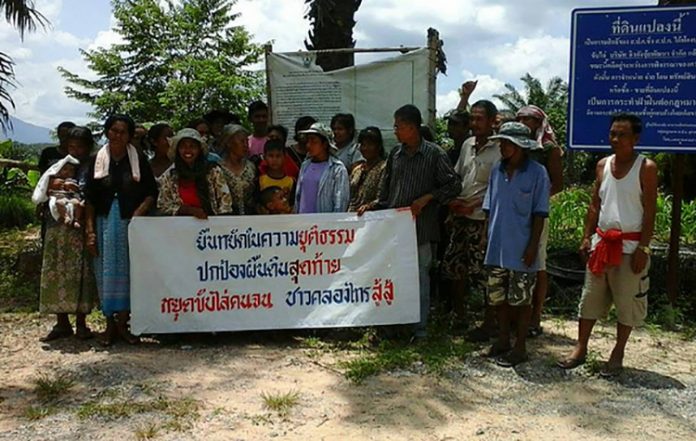 FORUM-ASIA, together with its member the People’s Empowerment Foundation (PEF) from Thailand, has strongly condemned the killing of Chai Bunthonglek, a land rights defender and member of the Southern Peasant’s Federation of Thailand (SPFT) from Khlong Sai Pattana Community in Chaiburi District of the southern Surat Thani Province in Thailand.

(Bangkok, 12 February 2015) The Asian Forum for Human Rights and Development (FORUM-ASIA), together with its member the People’s Empowerment Foundation (PEF) from Thailand, has strongly condemned the killing of Chai Bunthonglek, a land rights defender and member of the Southern Peasant’s Federation of Thailand (SPFT) from Khlong Sai Pattana Community in Chaiburi District of the southern Surat Thani Province in Thailand.

“This deplorable act is one of a series of killings designed to intimidate  communities who are seeking to protect their land and livelihood against encroachments of destructive agricultural industries in the province,” according to Evelyn Balais-Serrano, FORUM-ASIA’s Executive Director. “We call on the government of Thailand to immediately investigate the killing and ensure those who are responsible are held to account,” Balais-Serrano went on to say.

Bunthonglek was shot dead in his home by two unidentified gun men around 6 pm on 11 February 2015. This is disturbingly not an isolated case and Bunthonglek is the fourth member of the SPFT to be assassinated. As a member of SPFT, he was campaigning for community land rights in an ongoing dispute with local politician-owned palm oil company Jiew Kang Jue Pattana Co. Ltd. The villagers of the community, including human rights defenders, have been facing constant threats of killing and forced eviction from land that they have a legal right to occupy.

“These appear to be systematic killings and attacks on human rights defenders, which should never be tolerated. The government of Thailand should investigate thoroughly to ensure that the perpetrators are punished and the rule of law is upheld,” said Evelyn Balais-Serrano, FORUM-ASIA’s Executive Director. “Failing to seek justice in the killing of Bunthonglek will only fuel impunity in Thailand,” she added.

Thailand is a party to the International Covenant on Economic, Social and Cultural Rights (ICESCR), and has the obligation to respect, protect, and fulfill the rights protected under treaties, in particular the right to land and natural resources. “It is important that all human rights violations under the ICESCR are addressed particularly given the upcoming review by the UN Committee on Economic, Social and Cultural Rights in early June this year. The process must hold the government of Thailand accountable for their human rights obligations,” said Evelyn Balais-Serrano.

The Khlong Sai Pattana community has been entangled in an ongoing land conflict with the Jiew Kang Jue palm oil company. The Agricultural Land Reform Office (ARLO) claims to rightfully own the land and sued the Jiew Kang Jue Pattana Co. Ltd. for illegal land encroachment in 2007. The ARLO won the case in the first instance and on appeal. Pending resolution of the dispute, the government has granted the Khlong Sai Pattana community full entitlement to the land in question. Despite these rulings and the ARLO’s decision, the company remains illegally occupied and keeps mounting pressure on them to cede the land.

PEF was established in 2006 to address the needs of grassroots civil society networks in Thailand. PEF acts as the secretariat for a coalition of community-based organizations (CBOs) and maintains close working relationships with other partner organisations and networks within the country and throughout South East Asia.