Home Statements TFDP: Maritess and Rosario, Hold Their Torturers Accountable So That It may Not Happen Again to Anyone 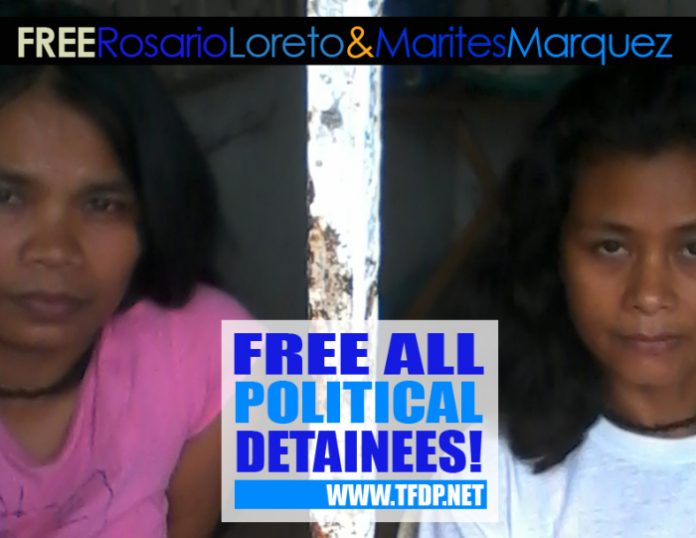 Task Force Detainees of the Philippines (TFDP) calls on the immediate implementation of the Review Resolution issued by the Department of Justice Secretary Leila De Lima and the immediate release of the two Agta women illegally arrested, detained and psychologically tortured by authorities.

Task Force Detainees of the Philippines (TFDP) calls on the immediate implementation of the Review Resolution issued by the Department of Justice Secretary Leila De Lima and the immediate release of the two Agta women illegally arrested, detained and psychologically tortured by authorities.  (http://opinion.inquirer.net/79521/to-have-peace-there-must-be-justice)

All those involved must be held accountable and this practice that violates human rights must be stopped.

Marites and Rosario were arrested by combined elements of the 59th and 16th Infantry Battalions and local police of Tanay, headed by 2LT Ronnel Avanzado and Chief Insp. Reynaldo Francisco because they were suspected to be members of the New People’s Army (NPA), accused of kidnapping, robbery and murder.

According to the DOJ statement posted on their website, “Pursuant to her power to act directly on any matter involving a probable miscarriage of justice within the jurisdiction of prosecutors, and to review the final judgments and orders of prosecutors, a Review Resolution was issued by the Secretary of Justice in connection with the case of two Dumagats who are allegedly detained at Tanay Philippine National Police, Rizal.” (http://www.doj.gov.ph/news.html?title=Reinvestigation%20of%20the%20Kidnapping%20Case%20Against%20Two%20Dumagats%20Detained%20at%20Tanay%20PNP%20Rizal%20Ordered&newsid=341)

In view of the findings of DOJ, based on the careful review of the evidence on record, it reveals that a procedural flaw violated the sacred rights of Marites and Rosario. The Justice Secretary emphasized in the Review Resolution that “in an inquest proceeding, it is the duty of the prosecutor to, first and foremost, determine the legality of the arrest made.”

DOJ also stated that the arrests of Marites and Rosario were based merely on hearsay information provided by a certain Mr. Delos Angeles. In reviewing the Resolution, the Justice Secretary cited the ruling of the Supreme Court in the case of People vs Doria that “if there is no showing that the person who effected the warrantless arrest had, in his own right,  knowledge of facts implicating the person arrested to the perpetration of a criminal offense, the arrest is legally objectionable.”

Thus, the need for this injustice and human rights violation against Marites and Rosario be stopped. Immediately release the two IP women and made those involved in the irresponsible and illegal arrest and torture of the two be held accountable.

Base on TFDP documentation besides being illegally arrested and detained, Marites and Rosario also suffered emotional trauma caused by this unfortunate incident.  They were deprived of sleep and rest during their interrogation and have feared for their lives.

Their families, including their children and livelihood have been affected severely since they have been illegally detained for more than five months now.

There have been many cases of illegal arrests and torture perpetrated against alleged and accused members of rebel groups violating the right to due process and equal protection under the law, victimizing innocent civilians belonging to the marginalized sectors.

There were cases of mistaken identities and many more human rights violations and there were no perpetrators punished.

Let Marites and Rosario be the last victims of this habitual and irresponsible handling of authorities especially the security sectors to cases involving suspected insurgents.  Release them and hold all those involved accountable.