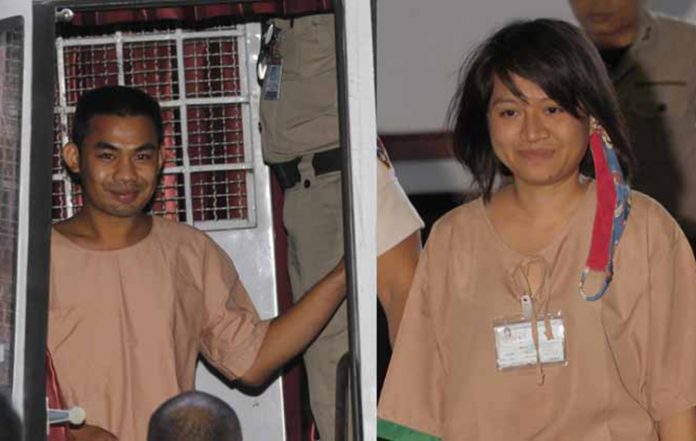 FORUM-ASIA is deeply concerned by the Thai Criminal Court’s verdict today on ‘The Wolf Bride’ case under lèse majesté law (Article 112 under the Criminal Code) that concluded with the conviction and sentencing of two theatre activists to two and half years imprisonment.

(Bangkok, 23 February 2015) – The Asian Forum for Human Rights and Development (FORUM-ASIA) is deeply concerned by the Thai Criminal Court’s verdict today on ‘The Wolf Bride’ case under lèse majesté law (Article 112 under the Criminal Code) that concluded with the conviction and sentencing of two theatre activists to two and half years imprisonment. Pornthip Mankhong and Patiwat Saraiyam faced a maximum of fifteen years imprisonment for committing defamation against, insulting or threatening the king, the queen, the heir-apparent or the regent, but were given a reduced sentence having pled guilty following their arrest.

“The verdict demonstrates the worrying trend in using the vague and ambiguous lèse majesté law by the Thai government to curtail freedom of expression of its people especially after the coup,” noted Evelyn Balais-Serrano, the Executive Director of FORUM-ASIA.

The Wolf Bride play took place on 13 October 2013 as part of the 40th Anniversary commemoration of the 1973 student uprising. The drama was about a fictional monarch and the king who is manipulated by his own advisors which aimed to inspire people to empower themselves for their political and social struggles. Since the military coup in May 2014 and the declaration of Martial Law, the National Council for Peace and Order (NCPO) has used the lèse majesté law as part of its larger efforts to round-up political activists, journalists, politicians, academics and dissidents and curtail freedom of expression and any form of dissent. Although the play was held before the coup it did not prevent the NCPO from pursuing a case against its scriptwriter, actors and sponsors thereafter.

The NCPO detained and interrogated ten current and former members of Prakai Fai Karn Lakorn, the group that had organised the play, for several days. The junta later issued the arrest warrant against four actors, two of whom have since fled Thailand.

Pornthip Mankhong and Patiwat Saraiyam were arrested in August 2014. Pornthip is a political and theatre activist who has been working on different social issues since she was a student. Patiwat is currently a fourth-year student at Khonkaen University. Both of them were denied bail at least five times before conviction today.

“The military government has an obligation to ensure fundamental civil and political rights of Thai people under the international human rights instrument and allow for legitimate dissent and freedom of expression, instead of spreading fear and encouraging silence in society,” stressed Balais-Serrano.

Thailand is a state party of International Covenant on Civil and Political Rights which ensures the right to freedom of expression including freedom to seek, receive and impart information and ideas of all kinds. The former UN Special Rapporteur on the promotion and protection of the right to freedom of opinion and expression, Frank La Rue, urged Thai government to amend the controversial law in 2011, stating that ambiguity and long sentences are not in compliance with restrictions of freedom of expression under the international human rights law. [1]

FORUM-ASIA is a Bangkok-based regional human rights group with 47 member organizations in 16 countries across Asia. FORUM-ASIA has offices in Bangkok, Jakarta and Geneva. FORUM-ASIA addresses key areas of human rights violations in the region, including freedoms of expressions, assembly and association, human rights defenders, and democratisation.