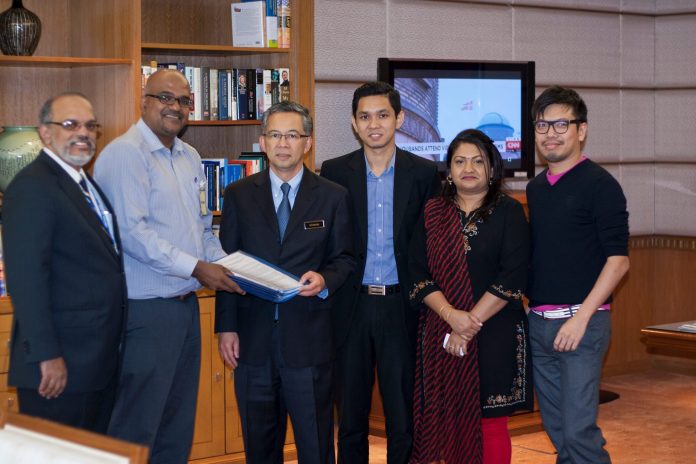 In a press conference today Jerald Joseph of Pusat Komas, the co-chair of APF 2015, stressed the forum’s hopes for meaningful consideration by the ASEAN governments.

“Receiving the statement is a good step by the ASEAN governments. We are pleased that the window of engagement has opened under Malaysia’s chairship.”

He added, “What really matters is that our concerns and recommendations are acted upon, and we look forward to continue the engagement with ASEAN governments towards this aim.”

Sumitha Shaanthinni Kishna of the Migration Working Group, a member of the APF 2015 organising committee, who also met with the Ministry, added, “This is an opportunity for Malaysia, as chair of ASEAN, to lead by example and ensure that civil society’s input is considered by all ASEAN governments. We hope that civil society from all the ASEAN countries will not be stopped from attending the forum and speaking freely.”

Othman Hashim, the Secretary-General of the Ministry of Foreign Affairs, met with the APF 2015 delegation.

As Malaysia is the chair of ASEAN this year, Malaysia’s Ministry of Foreign Affairs received the statement on behalf of the foreign ministers of the ten ASEAN countries. The Ministry will officially pass on the statement to its counterparts, as agreed upon at the ASEAN Foreign Ministers’ Meeting in January this year.

“The Secretary-General assured us that ASEAN will continue to interact with civil society organisations including the youth in order to move the region towards a people-centred ASEAN,” said Raja Azraff of Akademi Belia, also a member of the APF 2015 organising committee.

“In the coming months, we hope to see this assurance realised, not only by the Malaysian government, but by all ASEAN governments,” he added.

APF 2015 had also met with and handed the APF statement to Paul Low Seng Kuan, Minister in the Prime Minister’s Department, who holds the human rights portfolio. A meeting scheduled with Shafee Abdullah, Malaysia’s representative to the ASEAN Intergovernmental Commission on Human Rights (AICHR), has been postponed to early March.

The APF 2015 statement, entitled “Reclaiming the ASEAN community for the people”, highlights key regional issues like development justice; democratic processes, governance and fundamental rights and freedoms; peace and security; and discrimination and inequality.

Malaysia will play host to this year’s civil society conference from 21 to 24 April. The APF is an annual conference that attracts thousands of civil society members from across ASEAN. The conference is held parallel to the ASEAN Summit.