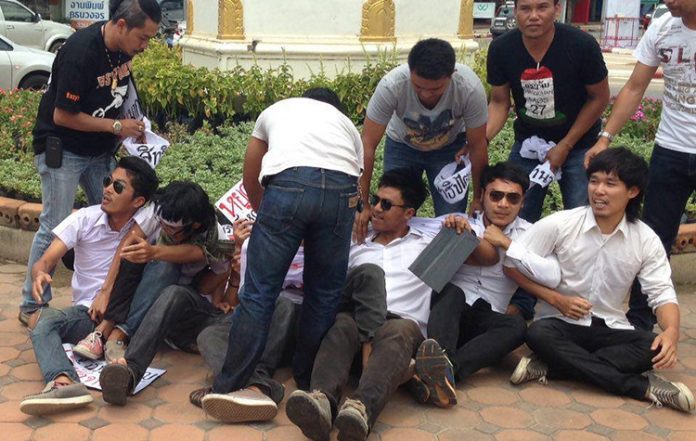 FORUM-ASIA, a Bangkok-based regional human rights group, strongly deplores the crackdown on the peaceful protest of the students. It is part of their right to peaceful assembly, which is guaranteed by Article 4 of the Interim Constitution of Thailand and the International Covenant on Civil and Political Rights (ICCPR) to which Thailand is a signatory.

(Bangkok, 22 June 2015) The ruling National Council for Peace and Order (NCPO) of Thailand should drop all charges against the seven student activists from Dao Din, a group of law students from Khon Kaen University, that were arrested on 22 May 2015. The Asian Forum for Human Rights and Development (FORUM-ASIA), a Bangkok-based regional human rights group, strongly deplores the crackdown on the peaceful protest of the students. It is part of their right to peaceful assembly, which is guaranteed by Article 4 of the Interim Constitution of Thailand and the International Covenant on Civil and Political Rights (ICCPR) to which Thailand is a signatory.

The seven students – Chatupat Boonyapatraksa, Apiwat Suntararak, Payu Boonsopon, Panupong Srithananuwat, Suvicha Tipangkorn, Supachai Pukrongploy and Wasant Satesit – were arrested while staging a peaceful protest against the military rule in Thailand on 22 May 2015, the first anniversary of the military coup. As part of the protest, they held up a banner at the Democracy Monument in Khon Kaen to say they opposed the coup.

The students were charged for violating NCPO order no. 3/2558 (3/2015) which invokes the enforcement of Article 44 in the interim constitution. The students were released the next day on the condition that they report to the police station on 19 June 2015. Parents of the students were threatened to be summoned in case the students did not report themselves.

Three other students from the same group were detained for a couple of hours on 19 June by the police for carrying paper figures representing the seven Dao Din students under investigation, and were sent to a nearby military camp.

More than 100 military and police officers were deployed in Khon Kaen province on 19 June to monitor any movement of the group, and to suppress their activities.

Since the coup in 2014, the Dao Din has organised peaceful protests against the military government, including showing a three-finger salute, a symbol of defiance in Thailand, in front of Prime Minister General Prayuth Chan-Ocha in November 2014. Five students were arrested then and taken to a nearby military camp.

The Dao Din has also been actively supporting communities affected by development projects and extractive industries in Thailand’s Northeast. For their acts of defiance against the military rule and other peaceful human rights activities in solidarity with communities, Dao Din student activists and their families have been summoned, monitored and threatened by the military and police officers. Authorities have visited and summoned members of communities, including the Khon Rak Ban Koed group and the Neo E-saan Movement, who expressed public support for the seven students, to inquire about their linkages with the Dao Din group.

Communities and human rights NGOs have reacted in support of the Dao Din. The National Human Rights Commission of Thailand has also awarded the group in recognition of their work and service to the community.

The respect for the right to peaceful assembly paves the way to a democratic society. The NCPO has time and again reiterated that it is working towards a road map to build up a genuine democracy in Thailand. “If what the NCPO has said is genuine, it should immediately drop all charges against the students and ensure that the fundamental freedoms guaranteed by the Thai Constitution and international human rights standards are fully respected,” said, Evelyn Balais-Serrano, Executive Director of FORUM-ASIA. “The government should open up space for different opinions and expressions as a genuine democracy cannot be driven by force or suppression. It must build on the will of the Thai people.”