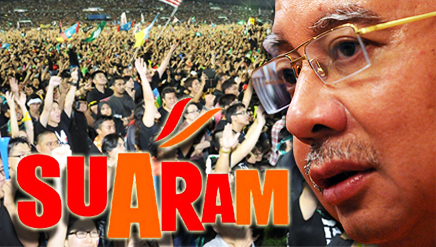 The Report concludes that the human rights record under the Najib Razak’s administration represents a new low in Malaysia in 2014, characterized by the increased crackdown on freedom of expression, assembly and association, continuous blatant police abuse of power, free falling of international rankings on trafficking of persons and worst country for migrant workers and exemplified by the prime minister’s infamous about-turn decision on his public promises to repeal the Sedition Act at the UMNO General Assembly.

SUARAM is pleased to launch its 2014 Human Rights Report of Malaysia today. Since its first launch in 1998, SUARAM has without fail published an annual human rights report which offer comprehensive documentation and analysis of the human rights landscape, a report that is much awaited by local civil society and international human rights organisations.

The Report concludes that the human rights record under the Najib Razak’s administration represents a new low in Malaysia in 2014, characterized by the increased crackdown on freedom of expression, assembly and association, continuous blatant police abuse of power, free falling of international rankings on trafficking of persons and worst country for migrant workers and exemplified by the prime minister’s infamous about-turn decision on his public promises to repeal the Sedition Act at the UMNO General Assembly. Human rights defenders, activists, academic and students and political figures continued to face harassment and persecution.

SUARAM would like to highlight six worrying trends developed in 2014 that warrant immediate attention and actions from the government and the general public.

2014 saw an increase in racial and religious hate speech by right wing groups, most notably Perkasa and Isma, which has been silently tolerated by the authorities. This is in stark contradiction to the clampdown on critical voices and dissenting views with the draconian Sedition Act, in which authorities labelled such speeches as threatening public order. Ethnic relations has been further strained despite claims of commitment to moderation and tolerance by the Prime Minister at high profile international meeting.

SUARAM warns that if this issue continues to develop with no meaningful action taken by the government to eradicate hate speech, it will not only hinder process of freedom of religion and racial equality, but it could fuel ethnic and religious hatred that may lead to civil conflict, destroying the multi-ethnic and multi-religious society of Malaysia.

Application of the Sedition Act 1948

The Sedition Act has been invoked to investigate or charge or convict 44 individuals in 2014 who had allegedly shown contempt for the monarchy, the religion Islam, the Malay special position in the country, the government and the judiciary, when in the eyes of any right minded men, they were merely exercising their right to freedom of expression. The political nature of the Act is further epitomized by Prime Minister Najib Razak caving in to the pressure by right wing groups and reneging on his electoral pledge to repeal the Sedition Act. The regressive decision by the authority has created a chilling effect on the freedom of expression and a severe affront to democracy.

2014 saw the Security Offences (Special Preventive Measures) Act 2012 (SOSMA) and the Prevention of Crime (Amendment) Act 2013 (POCA), essentially replacing the abolished Internal Security Act 1960 and the Emergency (Public order and Prevention of Crime) Ordinance 1969. In 2014, through to November, 37 people have been detained under SOSMA, bringing the total to 152 since SOSMA came into force. Another 116 were reportedly detained without trial under POCA in the first month of POCA came into force in April 2014 while no official figures was given by the government on those detained under the Dangerous Drugs (Special Preventive Measures) Act 1985.

Passage of these legislations raises worrying questions whether the Malaysia government will fall back into past practices which frequently incite fear of indefinite detention under ISA and EO to oppress outspoken dissents. More injustice is expected to take place under detention without trial law in the coming years.

Continuing impunity and abuse of power by police

The Royal Malaysia Police (PDRM) continued to operate with no accountability in the absence of any effective and independent oversight mechanism. The government remained resistance towards the recommendation by the Royal Commission and the UN Human Rights Council (through the second Universal Periodic Process (UPR)) to establish the Independent Police Complaint and Misconduct Commission (IPCMC). The situation is further aggravated when the widely perceived ineffective Enforcement Agency Integrity Commission (EAIC) was without chairperson and commissioners between April and November 2014, effectively rendered the commission a defunct institution.

\Remand system has been abused by the police to detain human rights defenders in sedition case by effecting arrest in the middle of night and application for remand even when investigation could reasonably be completed within 24 hours.

Meanwhile, cases of death in police custody remained high with 14 recorded by SUARAM in 2014, despite the announcement of establishing of coroner’s court in every state by the de facto law minister Nancy Shukri in April. The Najib’s administration has thus failed to ensure oversight and accountability of the police with its continuous preference over the yet ineffectual EAIC.

Attacks on freedom of association

The Home Ministry and the Registrar of Society’s attacks on the Coalition of Malaysian NGOs in the UPR Process (COMANGO), Negara-ku, Sarawak Association for Peoples’ Aspiration (SAPA), Sisters in Islam (SIS) in 2014 saw a continuing trend of intimidation against critical groups such as Bersih 2.0 and SUARAM in 2013.

2014 was another challenging year for refugees, asylum seekers and migrant workers in Malaysia, not least with regard to the scant protection offered to these groups by the Malaysian authorities against activities of modern day slavers, human traffickers and other criminal element. This is again highlighted by the fact of Malaysia’s ranking in the US State Department’s Annual “Trafficking in Persons” Report has dropped to tier three and its poor showing in the “Global Rights Index: The World’s Worst Countries for Workers,” where Malaysia was ranked alongside Laos, Cambodia, Qatar, North Korea, and Zimbabwe.

To conclude, the 2014 SUARAM Human Rights Report again reveals the misconduct and repressive decision of an obdurate government that is unwilling to govern according to standards required that of Universal Declaration of Human Rights, which the Malaysian government has committed to.

SUARAM urges the Malaysian government to take immediate actions in reversing and halting the above six major trends of human rights violation. This should include, among others, a comprehensive law reform of all archaic legislations; enact necessary laws to protect freedom of expression and information, rights of refugees and migrant workers, and to prohibit all forms of torture; sign and ratify all key international human rights treaties; put in place a National Human Rights Action Plan; establish the essential independent institutions such as the IPCMC and Equality Commission; and others.

SUARAM would also like to express our sincerest appreciation to all human rights defenders who has been persistent and committed in defending human rights, democracy and justice.

We call on to our fellow Malaysians, who believe in equality and human dignity, who value democracy and fundamental liberties, who cherish the richness of our multi-ethnic, multi-religious and multi-cultural society, to stand up against all human rights violations and injustices. As asserted by Eleanor Roosevelt, “[w]here, after all, do universal human rights begin? In small places, close to home – so close and so small that they cannot be seen on any maps of the world. “