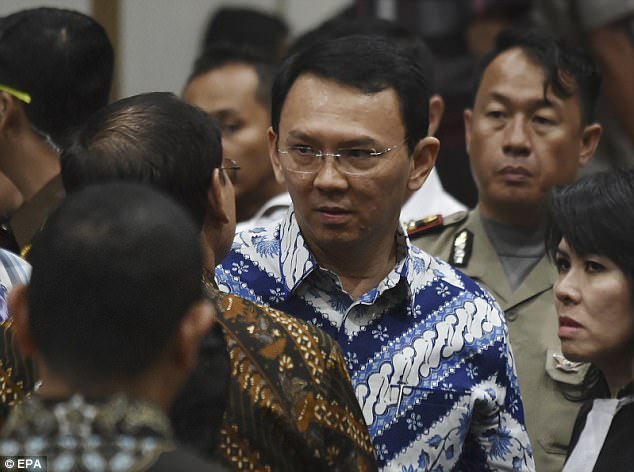 The Asian Forum for Human Rights and Development (FORUM-ASIA) is deeply concerned over the sentencing today of Jakarta’s Governor, Basuki Tjahaja Purnama, also known as Ahok, to two years in jail on charges of blasphemy. His jailing is an attack on fundamental freedoms, particularly the rights to freedom of expression and freedom of religion or belief, in the country.

(Bangkok, 9 May 2017) – The Asian Forum for Human Rights and Development (FORUM-ASIA) is deeply concerned over the sentencing today of Jakarta’s Governor, Basuki Tjahaja Purnama, also known as Ahok, to two years in jail on charges of blasphemy. His jailing is an attack on fundamental freedoms, particularly the rights to freedom of expression and freedom of religion or belief, in the country. Noting that an appeal will be filed to challenge the verdict, FORUM-ASIA calls on the High Court to immediately reverse the verdict, and for the Legislative and Government to take steps to repeal the blasphemy law, Presidential Decree No. 1/PNPS/1965, which gave birth to Article 156(a) of the Criminal Code. These laws are in violations of international human rights treaties, particularly the International Covenant on Civil and Political Rights (ICCPR), which Indonesia has ratified.

On 27 September 2016, in his capacity as the Jakarta Governor, Ahok quoted a verse from the Quran to argue that his opponents were using the Quran to discourage people from voting for a non-Muslim in the Jakarta elections. His comments were seen as a blasphemous act,, and triggered wide spread protests calling for him to face trial. While Ahok denied that he had done anything wrong, he did apologise for his comments. Charges of blasphemy were filed against him on 16 November 2016, and the first hearing took place on 13 December 2016. Today, 9 May 2017, he was sentenced to two years in jail for violating the blasphemy provision of the Criminal Code, Article 156(a).

The existence of the blasphemy laws in themselves go against international human rights standards. Blasphemy laws has been used to criminalise religious views, practices, and/or indifferences and to suppress religious minorities. Other blasphemy cases have been documented, including two emblematic cases against Lia Eden (2009) and Tajul Muluk (2012). The latter, a Shi’a Muslim religious leader from East Java, was sentenced to four years in prison for preaching about Shi’a teaching, which was considered illegal by other religious groups.

Heiner Bielefeldt, former UN Special Rapporteur on freedom of religion or belief, in 2009 said that, ‘States should repeal blasphemy laws, which typically have a stifling effect on open dialogue and public discourse, often particularly affecting persons belonging to religious minorities.’ The overwhelming majority of cases of blasphemy in Indonesia have indeed been brought against minority groups. Ahok himself is not only ethnically Chinese, he is also a Christian, making him part of two minority groups and an easy target for criminalisation.

In 2009, Imparsial, YLBHI, ELSAM, PBHI, Setara Institute, Demos, and other human rights organisations filed an application for a judicial review of Presidential Decree No. 1/PNPS/1965 on Blasphemy Law with the Constitutional Court.

Although the Court rejected the request to repeal the law and upheld the validity of the law, international human rights law stipulates that the prohibition of blasphemy does not include criticism of religions or beliefs. As recommended by the 2012 Rabat Plan of Action, ‘the right to freedom of religion or belief, as enshrined in relevant international legal standards, does not include the right to have a religion or a belief that is free from criticism or ridicule.’

The verdict against Ahok marks a significant step backward for the country. The attack on fundamental freedoms and human rights is not acceptable in a country like Indonesia, which proclaims to be one of the biggest democratic countries in the world. FORUM-ASIA, therefore calls for the immediate reversal of his sentencing, and the abolishing of the blasphemy laws: Presidential Decree No. 1/PNPS/1965 and Article 156(a) of the Criminal Code. The promised new Criminal Code would be a perfect opportunity to make that happen.