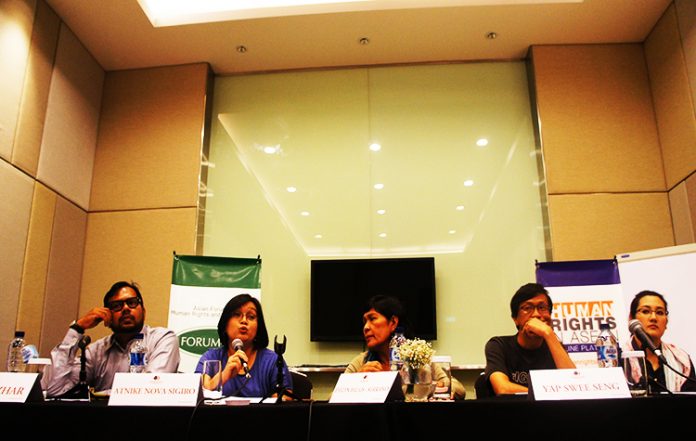 The 2013 performance of the AICHR and ACWC has been evaluated in the report “Four years on and still treading water”, published by FORUM-ASIA and the Solidarity for Asian People’s Advocacy – Task Force on ASEAN and Human Rights (SAPA TFAHR).

(Jakarta, 6 November 2014),The ASEAN Intergovernmental Commission on Human Rights (AICHR) and the ASEAN Commission for the Promotion and Protection of the Rights of Women and Children (ACWC)should accelerate its efforts in developing protection and redress mechanisms for victims of human rights violations in the region, said today the Asian Forum for Human Rights and Development (FORUM-ASIA) and its members organisations Kontras, People’s Empowerment Foundation and SUARAM.

The 2013 performance of the AICHR and ACWC has been evaluated in the report “Four years on and still treading water”, published by FORUM-ASIA and the Solidarity for Asian People’s Advocacy – Task Force on ASEAN and Human Rights (SAPA TFAHR). The 108-page report identifies and assesses the AICHR and ACWC’s main activities in 2013 and provides recommendations to both ASEAN bodies and member states.

“There is a glaring gap in the TOR of the AICHR and the actual implementation of the mandates in that it fails to develop protection and redress mechanisms for human rights victims in the region. This means that the people of ASEAN have no adequate protection of human rights when their governments fail to do so”, said Haris Azhar, Coordinator of KontraS.“Article 1.1 of the AICHR’s Terms of Reference (TOR) affirms that its purpose to promote and protect human rights. Article 4.1 of the TOR stipulates that one of the mandates and functions of AICHR is to develop strategies for the promotion and protection of human rights and fundamental freedoms to complement the building of the ASEAN Community. This is why the AICHR should also develop its protection and redress mechanisms and not just focus solely on promotion mechanisms.”

The review process of the TORs of AICHR, which commenced in 2014, and ACWC, which is scheduled to commence in 2015, constitutes a major opportunity to strengthen the ASEAN human rights system.

“Although there had been consultation meetings with NGOs by the AICHR on the review of its TOR, we regret that some NGOs remain rejected by AICHR in these consultation meetings. We are especially concerned that the public remains in the dark on the conclusion of the review of the TOR by AICHR despite the fact that AICHR has submitted its assessment and recommendations to the ASEAN foreign ministers”, noted Yap Swee Seng, Executive Director of SUARAM. “The two reviews should ensure that the capacities and mandate of the AICHR and ACWC will be enhanced to ensure not only promotion, but also protection of human rights”, Swee Seng concluded.

The report has been launched in Jakarta during the 7th Regional Consultation on ASEAN and Human Rights, where civil society organizations tackled various issues concerning human rights in ASEAN, with a particular focus on the coming ASEAN Economic Community (AEC) by 2015. The AEC blueprint provides no mention of human rights, let alone provide protection for those whose rights are affected by policies, such as market liberalization and large-scale development projects.“The role of AICHR and ACWC are still marginal in the implementation of the AEC, although there is room for the two bodies to identify and to mitigate the adverse impacts of the AEC on the livelihood of the people of ASEAN ”, said Atnike Nova Sigiro, ASEAN Advocacy Programme Manager of FORUM-ASIA.

About FORUM-ASIA:
The Asian Forum for Human Rights and Development (FORUM-ASIA) is a regional human rights group with 47 member organisations in 16 countries across Asia. With offices in Bangkok, Jakarta and Geneva, FORUM-ASIA addresses key areas of human rights violations in the region, including freedoms of expression, assembly and association, human rights defenders, and democratisation.

About KontraS:
The Commission for the Disappeared and Victims of Violence (KontraS) was established on March 20, 1998 in Indonesia as an investigative task force to find parties responsible for violence and disappearance. Since then KontraS works on various human rights issues, namely enforced disappearances, impunity and torture.