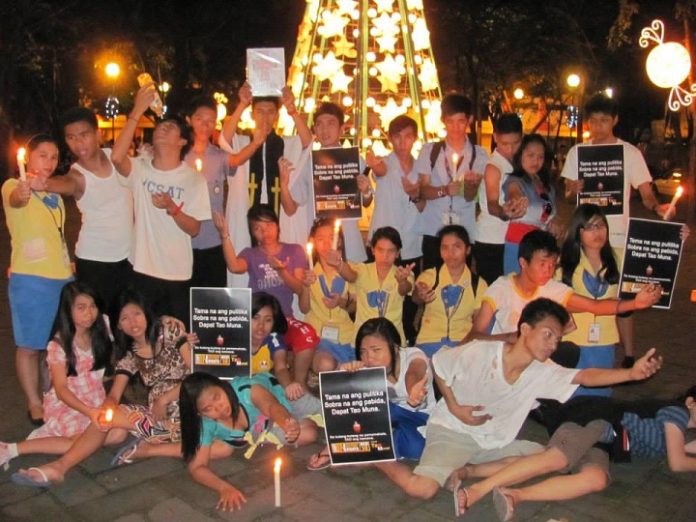 In commemoration of the International Human Rights Day of 2013, human rights groups held nationwide solidarity candle lighting in several parts of the country, for victims of typhoon Yolanda and other natural disasters and victims of human rights violations.

“We devote today’s commemoration of International Human Rights Day for all those who suffered and continue to suffer the result of climate change and environmental destruction caused by greed, development aggression and government neglect,” said Emmanuel Amistad, Executive Director of the Task Force Detainees of the Philippines (TFDP).

While the group extends their heartfelt solidarity to all victims, they are also calling on government leaders to prioritize the needs of the victims and refrain from politicking.

“Although our fellow Filipinos in disaster stricken areas, especially in Leyte needs all the help, relief and support we can provide, it will not be enough to solve the problems. Other future disasters will come and if the government will not be serious and sincere in performing its duty to protect its people instead of profit and corruption, all these will just be repeated,” Amistad said.

In Visayas, members of TFDP and its allies from the Philippine Movement for Climate Justice (PMCJ) held their “Light UP 4 Yolanda Victims, Light UP 4 Rights,” at the University of the Philippines Cebu. “We light candles in solidarity for all victims of climate disaster, mining and other profit driven development projects that does not benefit the people, instead harm them and lead to violations of their human rights.”

According to the group they are also dedicating the solidarity candle lighting for victims of Zamboanga siege, Bohol and Cebu Earthquake, and other natural and manmade disasters that devastated our peoples and communities. Saying, “We hope we can help inspire them to stand up and we are with them in struggling to regain what has been damaged and lost from them.”

The group lamented that “Sa kulang-kulang na pamamahala, Tao ang kawawa.”  The group also reminded PNoy of his obligation to issue a National Human Rights Action Plan (NHRAP) in compliance with the recommendation of the Universal Periodic Review of the United Nations Human Rights Council.